Ever since Congress and the White House put caps on federal spending starting in 2013, there have been calls to lift them for the Pentagon. The military’s pain has so become acute, both lawmakers and generals are now warning the cuts could kill more American troops in wartime—and already are killing more in peacetime, because of a lack of training.

“Our nation will deploy young Americans into battle without sufficient training or equipment to fight a war that will take longer, be larger, cost more and ultimately claim more American lives than it otherwise would have,” Senator John McCain, the Arizona Republican who chairs the armed services committee, said Thursday.

But it’s also a peacetime problem, far from the danger zones in Afghanistan and Iraq. Last year, 12 non-combat helicopter crashes killed 30 troops. Twelve more perished in January when two Marine CH-53s collided off Hawaii during a night-time training mission. Most of the deaths, including those in Hawaii, occurred during training missions. Funding for such missions has been cut in recent years as money has been funneled to units readying for deployment to war zones instead.

The Marine Corps’ Class A mishap rate—any crash that has injured or killed someone, or destroyed an aircraft—has jumped from 2.15 per 100,000 flying hours for much of the past decade to 2.67 in 2014 and 3.96 so far in 2016. Rep. Mac Thornberry, the Texas Republican who chairs the House Armed services committee, asked General Robert Neller, the Marine commander, about the rise at a Wednesday hearing. “We track this very closely,” Neller told him. “The simple fact is that we don’t have enough airplanes to meet the training requirements for the entire force.”

The Army faces a similar problem. “Aircraft accidents have increased and we are very concerned about it,” General Mark Milley, the Army chief of staff, said at the same hearing, according to Stars and Stripes. The service wants to boost monthly flying hours per pilot from 10 to 12 to increase training. “Ideally we want them [boosted] to 14-15 hours per month, but we can’t get there with the budget.”

The generals aren’t crying wolf, according to Alan Diehl, a long-time military-aviation accident investigator. “I think the generals are correct about funding limitations being a factor in their increased mishap rates,” says Diehl, a former Air Force Safety Center research psychologist. “Most of these mishaps have involved helicopters and have occurred during night ops, and require skills that can quickly deteriorate when not frequent practiced.”

A retired Navy aviator agrees, and says civilian leaders—both in Congress and at the White House—are to blame. “The Army and Marine Corps general officers are siding squarely with their subordinates, and laying the blame for the increased mishap rates directly at the feet of the civilian authorities,” says Chris Harmer, now an analyst at the Institute for the Study of War. Commanders are cutting training in favor of procurement and combat, he says, and as long as that continues, “we will see excess pilot mortality in the short term, and increased risk of inadequately-trained and -maintained forces in the long term.”

Using the prospect, or fact, of dead Americans is a long-standing tradition in Pentagon budget wars. But when you’ve got 1.4 million troops training with huge machines moving at high speeds, there are going to be casualties. The Pentagon always insists that any peacetime death is unacceptable. But the military routinely deploys weapons that could be made safer, or funds training at lower levels that makes operating aircraft and other weapons more dangerous.

The key question always has been when do those levels become unacceptable, and to what degree can more spending make such operations safer. The caps were imposed by Congress and the White House, and can be lifted by them, as well. But enough lawmakers believe the spending limits are the only thing restraining the growth of the national debt, which now stands at $19 trillion.

On Thursday, McCain criticized Defense Secretary Ash Carter and Marine General Joseph Dunford, chairman of the Joint Chiefs of Staff, for endorsing defense budgets that are sapping U.S. military readiness. Dunford, nicknamed “Fighting Joe” for his command of the 5th Marine Regiment during the 2003 invasion of Iraq, countered with a rhetorical jab of his own. “We have made the best decisions that we can,” he said, “within the top-line that we were given from Congress.” 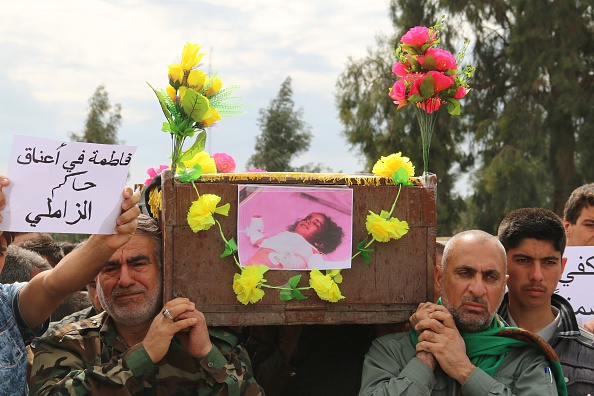 Why This Recent Piece of ISIS Intelligence Stands Out
Next Up: Editor's Pick