Establishment Republicans unhappy with the prospect of Donald Trump had a surge of excitement on Wednesday when House Speaker Paul Ryan seemed to leave the door open to accepting the nomination in a contested convention.

“You know, I haven’t given any thought to this stuff,” Ryan told CNBC’s John Harwood. “People say, ‘What about the contested convention?’ I say, well, there are a lot of people running for president. We’ll see. Who knows?”

His hedge spiked speculation that Ryan might contest the convention, and sent Ryan’s press staff into overtime trying to tamp down that talk.

While some Beltway Republicans feeling left behind by this presidential primary might like to daydream about it, Paul Ryan isn’t going to be their savior. Here’s four major reasons.

First, Ryan is still trying to get his arms around the last job he didn’t want but was coerced into taking by his party. Just this week, the GOP budget was all but killed by fiscal conservatives at an impasse over funding levels with military hawks. Yes, Ryan, the former Budget Committee Chair cum House Speaker, the man who virtually coined the taunt “No Budget, No Pay,” to shame Senate Democrats for not producing budgets, is likely to fail to pass a budget in his first go around as speaker. This is worrisome on a lot of fronts: Ryan was brought in to bridge the party’s divides. But he seems to be falling into the same traps as his predecessor, John Boehner. If Ryan can’t bring the House Republicans together, how can he heal the even greater rifts of the Party at large?

Second, the folks who did run would freak out. “It has to be somebody in the fight. I was in the fight and every body who was in the fight should say with one voice you’ve got to pick among us, because we’re the ones doing the fighting,” Sen. Lindsey Graham told me on Monday. “A contested convention is different from a brokered convention. If you really wanted to destroy this party, parachute somebody in, no matter how much I would like him, who chose not to run.”

Third, on what planet does anybody think that Donald Trump would go quietly into the night? On Wednesday Boehner suggested that Ryan might win a contested balloting process at the convention. “If we don’t have a nominee who can win on the first ballot, I’m for none of the above,” Boehner said. “They all had a chance to win. None of them won. So I’m for none of the above. I’m for Paul Ryan to be our nominee.” Trump responded that such a move could lead to violence—even greater violence than seen at some of his rallies of late. “I wouldn’t lead it,” he told CNN of the potential unrest. “But I think bad things would happen.”

While Ryan continues to say that he wouldn’t accept the nomination, on Thursday he fanned the flames of the idea of a brokered convention. “We’re getting our minds around the idea that this could very well become a reality, and therefore, those of us who are involved in the convention need to respect that,” Ryan told reporters on Capitol Hill. Ryan also scolded Trump for his warning of violence. “Nobody should say such things, in my opinion, because to even address or hint to violence is unacceptable,” he said.

Fourth, such a move would almost assuredly lose the Party the general election. Trump followers would be outraged and he could potentially peel off and run as a third-party candidate. And it would take at least a month, if not longer, to unite the party. That’s crucial time not spent campaigning against the likely Democratic nominee, Hillary Clinton.

All of which is to say: Boehner and all those Republicans dreaming of a President Ryan, dream on—at least until 2020. 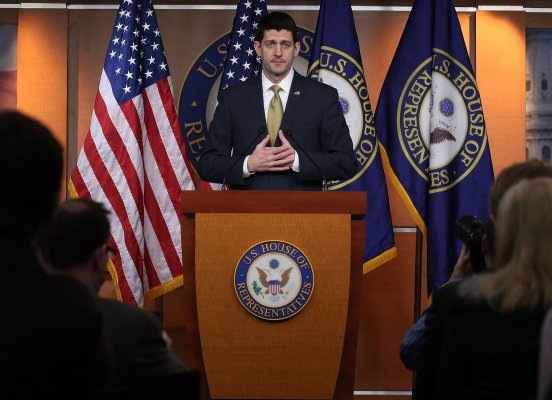