How to Talk to Your Kids about Donald Trump

Kevin Van Epps and I have a number of things in common.

We’re both white 30-somethings who live in New York State. We both have young daughters; his is seven, mine is six. And we both want the world for our girls, which means, among other things, that our wish for them is to grow up in a country that’s peaceful, one in which they can do and be anything and contribute to a democratic society.

Van Epps and I also consider ourselves to be politically engaged. We pay attention to the news and we’ve watched the debates. We both take seriously the right to vote, and we both intend to do so in the April 19 primary.

But next month, Van Epps and I will be voting for different candidates. I’ll be casting my vote for Bernie Sanders. Van Epps will be ticking the box for Donald Trump.

As a parent, I worry that his vote could hurt my six-year old daughter, triggering the deepest fear any child has: losing a parent.

“If Donald Trump gets elected, will Papi have to go back to his country?” my daughter asked me. Will her father, a refugee from Cuba, be deported? Will our undocumented immigrant friends from Mexico, who have known Mariel since she was two days old, be sent away?

I wasn’t sure how to answer. How do we talk to our children about a potential Donald Trump presidency?

Curious as to how parents who support Trump are answering their kids’ questions, I contacted Van Epps. He said that the primary appeal of Trump is his honesty of speech. “I think Marco Rubio lies. I think Ted Cruz tries to cram too much of the Bible into the Constitution. We need to tell people the hard truth,” Van Epps says.

In his opinion, the hard truth is that institutional racism does not exist in the justice system and that America is too lenient in its immigration admission policies. He believes Trump is the only candidate willing to articulate that hard truth.

He’s not particularly worried about how his daughter might interpret Trump’s speeches and sound bites. Instead, he is more concerned with educating her about how a democracy functions. He wants her to make decisions based on information, not on feelings, and that’s what they talk about when they discuss the current campaign.

But are you concerned, I asked him, about how Trump does that, how respect for others and civil speech are simply not part of Trump’s make-up? Van Epps concedes that in his ideal world, there would be a candidate who had Trump’s policy ideas and candor, but not his egotistical bluster. Since that candidate hasn’t appeared, he has to take what he’s got.

Where does that leave those of us who are parenting children with real fears about a Trump presidency? Dr. Sarah Mohiuddin, a child analyst and psychiatrist on faculty at The University of Michigan and a Muslim American, says she has had an increasing number of parents contact her with concerns about the current political climate and, yes, about Trump. “Parents are telling me their kids can’t sleep or they’re getting up in the middle of the night, crying. They’re saying, ‘My kid has been having nightmares,’ and finally they tell me that they’re worried about Trump.”

She points out that many kids may not even be expressing their worries overtly to parents, but might, instead, be talking about campaign issues and resulting anxieties within their peer groups. “A lot of kids are trying to sort through this themselves,” she says. “Part of that might be because they hear their parents talking about it around them, but not talking to them directly about it, so one suggestion I have is to address these issues openly. If you’re discussing politics in your home, you may not even realize your child is being affected by it, so it’s really important to find out specifically what your kid’s concern is.”

“It is okay for you, the parent or caregiver, to say you feel angry because that would be the truth and it is normal, but try to be as in control as possible when you say it,” says Kim Arrington, Clinical Director of Harlem Family Institute in New York City and a psychologist in private practice. “The goal is to help the child express her feelings and to feel supported, safe and cared for. It also models for them how to express feelings.”

Arrington thinks it might be helpful to explain to kids that “we live in a country where people are allowed to say what they want. But, people say hurtful things sometimes when they are angry or scared.” It might be helpful to bring up an event in your family where such a thing has happened.

For older kids, says Dr. Abby Reisman, Assistant Professor of Teacher Education at The University of Pennsylvania, it’s important to find ways to “use history to make sense of the present.” This is especially true for teachers, who shouldn’t impose their own opinions upon children. Instead, teachers can leverage classroom time to guide students toward a more studied approach to current events, one that’s grounded in historical context.

One of the most important things any adult can do for a child is to establish a relationship in which talking about fears and unpleasant feelings is part of your daily routine. “You want to make sure you’re talking to your kids about hard things even when hard things aren’t going on, Dr. Mohiuddin explains, “so when it’s time to have the hard conversation, it’s not uncomfortable for you both.”

As a mother, Dr. Mohiuddin puts this into practice daily. “I say to my kids, ‘Tell me something great that happened today, and tell me something that wasn’t so great—something you didn’t like or something you wish hadn’t happened.’ If you’re doing this even when things aren’t hard, you get a sense of how your kids are thinking about the world.”

If your child continues to struggle with excessive worry, it may be time to seek additional help from a mental health professional. “Most children, if they have a secure attached relationship, when they seek reassurance, it truly is reassuring,” she says. “But if your child is repeatedly asking the same question or requires reassurance in multiple ways or you notice them withdrawing or being more emotional or irritable, it’s a sign that that stressor has maybe triggered more serious mental health concerns that need intervention. I certainly have parents who have come to me, feeling that they’ve reached that threshold.” 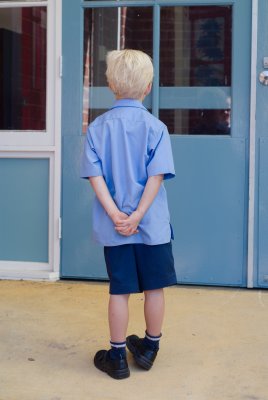 Sometimes those tensions can be an opportunity
Next Up: Editor's Pick