Michigan Gov. Rick Snyder faced harsh criticism over his handling of water contamination in the city of Flint during testimony before a Congressional committee Thursday.

Snyder portrayed the crisis as a failure at all levels of government and told lawmakers that he had been told repeatedly that drinking water was safe for consumption. “Let me be blunt,” he said, according to prepared remarks. “This was a failure of government at all levels. Local, state, and federal officials – we all failed the families of Flint.”

But lawmakers didn’t let Snyder off easy. Rep. Elijah Cummings of Maryland argued that the governor “either ignored them or didn’t hear” repeated warnings about the problem in Flint citing emails from top advisers from more than a year before Snyder began to address the problem.

Read TIME’s Cover Story: The Poisoning of an American City

For nearly 19 months after the city switched its water source from Lake Huron to the Flint River to save money, the river water corroded old pipes and leached dangerous levels of lead into residents’ taps, all while officials repeatedly said the water was safe to drink. It took documented proof from outside researchers of elevated levels of lead in the municipal water supply and in the blood samples of children in Flint before city and state officials acknowledged that the water was unsafe.

In a rhetorical fashion common in Congressional hearings, Cummings likened Snyder to a white collar criminal and suggested that if had failed a company as he failed the people of Flint “he would be hauled up on criminal charges.”

“The board of directors would throw him out. And the shareholders would revolt,” he said.

EPA Administrator Gina McCarthy, who also testified Thursday, also faulted Snyder and the Michigan state government for not addressing the problem. “The crisis we’re seeing was the result of a state-appointed emergency manager deciding that the city would stop purchasing treated drinking water and instead switch to an untreated source to save money,” she said. “The state of Michigan approved that decision, and did so without requiring corrosion control treatment.”

Snyder has apologized for his handling of the crisis while fending off calls for his resignation since it became a national scandal earlier this year. At the same time, he has demanded a full accounting of how the problem came to be and committed $67 million in emergency spending to address the issue. Snyder has requested hundreds of millions more from Congress and the state legislature. 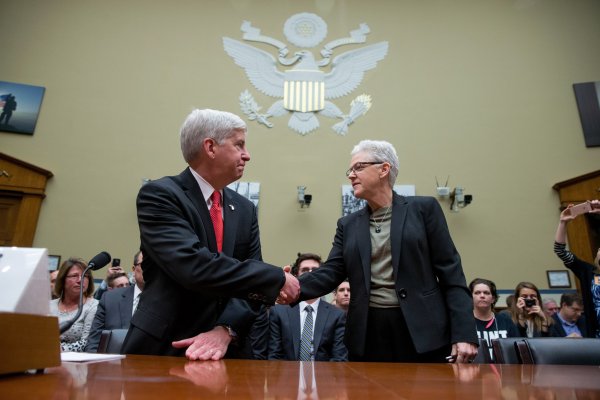