On the wall above the couch in Tim Cook’s office at Apple are three black-and-white portraits: Bobby Kennedy, Martin Luther King Jr. and Jackie Robinson. They were part of the subversive ad campaign Apple devised at a low point in 1997 to set itself apart from the competition. The slogan was “Think Different”–which is exactly what Cook is now asking us to do. Having conquered the world with his devices, he is now clashing with the U.S. government over privacy, security and the balance of public and private interests.

TIME senior writer Lev Grossman and I went to see Cook in Cupertino, Calif., as Apple faces an immense test: commercial, legal, political, even moral. How can the company refuse to help the FBI break into the phone of one of the San Bernardino terrorists? Does one company really have the right to defy two centuries of American jurisprudence about proper searches and the reach of the law? And what would this mean for the rest of us?

Lev’s story explores how Cook sees the stakes of this case and the role he aims to play. Cook’s dilemma is shared by other leaders of the new-media world, which is one reason executives from Facebook, Google, Snapchat, LinkedIn and many others have fallen in line to support him. The press barons of the 20th century–Luce, Paley, Chandler, the Sulzbergers, the Grahams–built empires that made vast fortunes but acknowledged a public trust: a free press is essential to a healthy democracy, so editors and publishers weighed their commercial interests with their civic responsibilities. They debated standards of decency and considered whether to withhold information if national security were at stake. They went to court to protect confidential sources–or to publish the Pentagon Papers.

Technology, here as in all things, accelerates and complicates. What are Apple’s obligations, or Facebook’s, or Twitter’s–21st century companies that have built immense platforms, global networks, powerful tools, leveraging immeasurable good but also lubricating criminal networks around the world? This is not just an American question. These are global companies with billions of dollars on the line and a leasehold on territory where there are no maps. In Europe, governments are fighting Google for individuals’ right to be “forgotten,” to erase their digital footprints. The revelations from Edward Snowden about the extent of U.S. surveillance were even more explosive abroad than at home.

So where should the issues be examined, the competing values weighed? In classrooms, courtrooms, congressional hearings? The stakes keep growing along with the amount of data we all collect and carry with us. We may voluntarily relinquish our privacy when we post a picture of dessert or compare our running times. But giving the government access to that information is something else–and this is exactly the kind of topic that should be addressed in a campaign year. It would be good to hear the candidates explore this intimate, intricate, evolving terrain, though perhaps not with the blunt force favored by Donald Trump, who has called for a blanket boycott of Apple. How much value do candidates place on personal privacy if it competes with the needs of law enforcement?

Sooner or later, these questions will need to be put before the American people, which is one reason that the FBI has made this fight so ferocious and so public. As Lev says, “There’s no easy answer: there are some technologies, like encryption, which simply cannot be controlled with legislation. We may have to concede some battles, like the San Bernardino phone, and grant privacy to people who don’t deserve it, in order to win the larger war for our information and for our safety.” 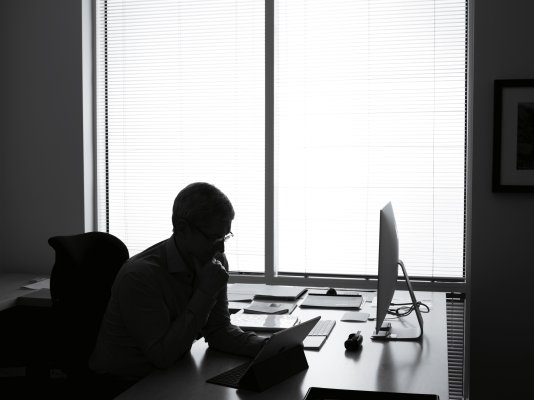 Inside Apple's FBI Fight
Next Up: Editor's Pick