It was love at first sight for Tom Hanks and Rita Wilson – or at least for one of them.

Hanks, 59, revealed that the first time he laid eyes on his future wife was when she guest-starred as a cheerleader on The Brady Bunch in 1972.

“I was actually at a friend of mine’s house when it aired and I remember thinking ‘that girl’s cute,’ ” Hanks told reporters at the N.Y.C. premiere of My Big Fat Greek Wedding 2, which the couple co-produced.

While the lovebirds didn’t meet until years later, one could say The Brady Bunch made them Bosom Buddies – at least in the mind of the future Oscar-winner.

Hanks and Wilson, also 59, tied the knot in 1988. Now, after nearly 28 years of marriage, the two admit that they rarely fight – except when one of them is behind the wheel.

“Usually when driving,” Wilson told PEOPLE of when they butt heads.

“That is hilarious. She’s actually telling you the truth right now,” Hanks chimed in. “I am driving, what I always say is, ‘Just don’t you worry your pretty little head. All you have to do is sit there and ride and I will decide how to get there,’ ” he said, making them both burst out in laughter.

“It’s hilarious,” the Bridge of Spies actor said, and his wife finished his sentence by saying, “We have a routine now.” 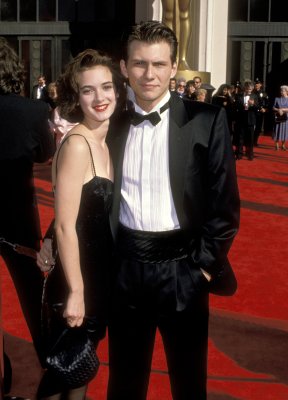 Cult Classic Heathers Is Being Rebooted on TV
Next Up: Editor's Pick