Voters walk out of their precinct after voting as Ohio voters go to the polls for the Ohio primary March 15, 2016, at St George Church in Cincinnati, Ohio.
John Sommers—Getty Images
By Daniel White

Early voting in primaries on “Super Tuesday 2” saw record youth turnout—but not in support of Hillary Clinton or Donald Trump, according to exit poll data.

Turnout among voters 18-29 broke primary participation records (set in 2008) in every state that voted except Ohio, according to the Center for Information and Research on Civic Learning & Engagement (CIRCLE). In Florida, some 500,100 young people came out to vote, outpacing the 2008 mark of 286,000 voters.

The majority of younger voters, however, didn’t cast their ballots for the front-runners in either party, according to CIRCLE’s director Kei Kawashima-Ginsberg.

“Although Mr. Trump and Secretary Clinton have emerged as decisive front-runners in the 2016 nominating contests, young voters show no signs of moderating their strong support for Senator Sanders or for unifying in support of Mr. Trump,” Kawashima-Ginsberg said. “Last night, young people made it clear—through their participation and vote choices – that the front-runners still have a lot of work to do to win them over for the general election.”

On the Democratic side, voters 18-29 preferred Bernie Sanders over Clinton in all five states—Florida, Illinois, Missouri, North Carolina and Ohio. While Clinton has all but locked up the Democratic nomination, scoring big wins Tuesday night, in the too-close-to-call race in Missouri younger voters preferred Sanders at a rate of more than 3-1 respectively.

Among Republicans, younger voters chose Ted Cruz in Missouri and North Carolina, John Kasich in Ohio and Trump in Florida and Illinois—where the billionaire had an advantage by slim margins. In all March 15 primary contests, young Republicans set participation records, according to CIRCLE. 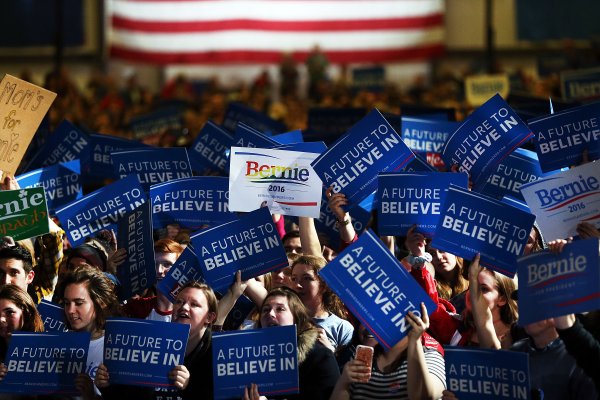 Bernie Sanders Gets an Alaska 'Super PAC' Aimed At Millennials
Next Up: Editor's Pick