President Obama has selected Merrick Garland, who currently serves as chief judge of the U.S. Court of Appeals for the District of Columbia Circuit, as his nominee for the U.S. Supreme Court. Garland, 63, is being tapped to fill the seat left vacant by the death of Antonin Scalia.

Garland, like Obama, has ties to the Chicago area and to Harvard. He was born in Chicago and graduated from Harvard College in 1974 before graduating with honors from Harvard Law School in 1977. After graduating Garland, clerked for Second Circuit Judge Henry Friendly and served as a clerk for Supreme Court Justice William Brennan.

Though Garland has worked in private practice, being named partner at the law firm Arnold & Porter, the bulk of his career has been spent in the public sector. Garland worked in the U.S. Department of Justice as a Special Assistant to the Attorney General between 1979 and 1981. He served as an Assistant U.S. Attorney in D.C. after leaving the private sector and before joining the U.S. Department of Justice. Garland served as both the Deputy Assistant Attorney General in the Criminal Division and the Principal Associate Deputy Attorney General prior to his nomination to the appellate court. While at the Justice Department, Merrick aided in the prosecution of the Oklahoma City bomber. Garland was the highest-ranking Justice Department official dispatched to the scene.

He has served on the appellate level since 1997, when he was nominated by President Bill Clinton and confirmed by the U.S. Senate. Two years prior, he had also been nominated to the court but his nomination was stalled by Senate Republicans. Throughout his two decades on the Circuit Court, which is often viewed as a stepping stone for U.S. Supreme Court Justices, Garland has widely been viewed as a centrist. But on matters of criminal law, the judge has been more center-right. He was found to “rarely [vote] in favor of criminal defendants’ appeals of their convictions” by a SCOTUSblog analysis of his record in 2010, and he joined an opinion that said Guantanamo Bay detainees cannot seek relief in civilian courts in 2003. His history on other areas of law, including environmental law, open government, and civil rights has also varied. Conservatives, however, question Garland over where he stands on gun rights.

The selection of Garland, though widely viewed as compromise choice, is sure to set of a maelstrom between Obama and Senate Republicans, who have vowed not to consider any Obama nominee and have argued the next president should fill the vacancy. 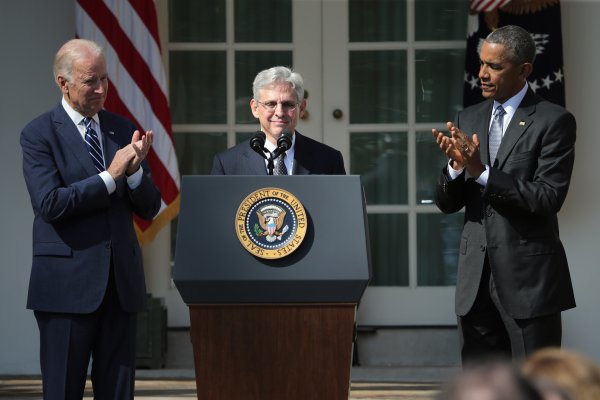