Even as Hillary Clinton bounded onto a stage in West Palm Beach, Fla. to give a victory speech on one of the best nights of her campaign, her adversaries on Tuesday were preparing their rebuttals.

Nearby in Mar-A-Lago, at his gold-leafed estate, Donald Trump railed against free trade deals the United States is party to, and many of which Clinton has supported. “We don’t win at trade. China, Japan, everybody—Mexico, Vietnam, India—anybody we do business with beats us,” he said.

“I say to corporate America, you want us to buy your products? Start manufacturing those products here in america, not in China,” Sanders yelled, continuing a harsh line of attack the Vermont Senator has leveled against Clinton he has made for weeks.

Trump, Sanders and their allies are helping whip up a populist storm that is agitating voters in America’s Rust Belt states, creating a new degree of uncertainty in the presidential election. It’s a message that has resonated remarkably well with white working-class voters, many of whom believe that poor trade deals engineered by a Washington establishment have cost them jobs, emptied factories and weakened their communities.

The protectionists’ ire is a challenge to Clinton, whose more ambivalent views on trade deals have exposed her to attacks from both conservatives and liberals.

The rumblings on free trade came on an otherwise strong night for Clinton. She won a sweep of victories that makes Sanders’ path to the nomination even more improbable. She earned nearly twice as many votes as Sanders in Florida, winning 1.1 million votes to Sanders’ 570,000. With most precincts reporting, she won Ohio, a state where Sanders was expected to do well, by 14 percentage points, and also North Carolina, where Sanders invested heavy advertising dollars, by a similar margin. Clinton built strongly on her massive delegate lead, reassuring Democrats.

By 1 a.m. on Wednesday, Clinton had claimed five states in a clean sweep, including states Sanders had hoped to win.

But even in the states Clinton won, many Democrats remain deeply skeptical about many of the trade deals that the former Secretary of State has supported in the past. Some 45% of North Carolina Democrats said trade takes away jobs versus 37% who said it created jobs, according the CNN’s exit polls, and in Ohio 53% of Democrats said trade takes away jobs while 29% said it creates jobs. Similar numbers hold up in old industrial states like Michigan, which swung for Sanders last week. Sanders has done significantly better than Clinton among these protectionist-leaning voters compared to overall totals.

Those numbers are just a reflection of the overall angst over American trade policy, particularly in Rust Belt states, some of which have shown Trump strong support. In Ohio, where Trump lost to Gov. John Kasich, he performed strongly with working voters in the shelled out old industrial communities in the Eastern part of the state.

At a Trump event on Monday in Vienna, Ohio, Gary Scurti, a 59-year old United Autoworker member, said he was supporting the billionaire for his promise to bring jobs back to the United States. “Mr. Trump is representing people who just want to earn a living. Hard work is fine. But we don’t have that work here,” said Scurti, who works at a nearby General Motors plant. “We have to protect our workers. Cut back on immigration until people here can get jobs.”

That sentiment presages an uncertain general election contest for Clinton, assuming she wins the nomination. The difficulty she has had in dispatching Sanders, a 74-year-old socialist, and in winning white, working class men suggests her vulnerability to sustained attacks on her record on trade in a matchup against Trump. Trump has said he can win Rust Belt states that have become Democratic strongholds. “I’m going to bring in places like Michigan,” Trump said last week of a state that has backed Democrats in the last six presidential elections. Top Democratic officials have countered that primaries say little about general election contests.

Sanders’ criticism against Clinton outlines the kinds of attacks Trump is likely to level if they meet in a general election. Sanders has repeatedly criticized Clinton for supporting the North American Free Trade Agreement in the 1990s, saying in a debate in Michigan that she “supported virtually every one of the disastrous trade agreements written by corporate America.”

Though his claim during the debate was an exaggeration, Clinton has supported a number of trade deals in the past. She did favor NAFTA, saying about the deal in 1996 that “everybody is in favor of free and fair trade,” and continued to voice support of it in later years. “Although unpopular with labor unions, expanding trade opportunities was an important administration goal,” Clinton said in 2003, looking back on the deal. Privately, however, aides say that she had reservations about the deal but supported it because it was backed by her husband.

Clinton was also was in favor of a landmark deal that normalized trade relations with China and was also passed during her husband’s administration. She said in 2000 that “on balance” permanent normalized trade relations with China were “in the interests of America and American workers.” Sanders has vehemently criticized Clinton’s role in engineering the Trans-Pacific Partnership. Clinton helped lay the groundwork for the TPP and called it “the gold standard in trade agreements.” Exit polls show Sanders’ attacks succeeded in Michigan and made a dent in her support in states like Ohio.

For his part, Trump has made trade the centerpiece of his campaign. During his Florida victory speech on Tuesday night, he launched invectives against feckless politicians in Washington who were unable to seal a good trade deal multiple times during his relatively brief comments. “It’s a total imbalance. We don’t make good deals anymore as a country we don’t win anymore,” Trump said, speaking as if he were speaking in Pennsylvania instead of Florida. “This country is going to start winning again. We don’t win anymore.”

Clinton is aware of her weakness on trade. Aides have said their candidate would work on explaining her economic vision but publicly emphasize her credentials on trade. “I would put Secretary Clinton up against any candidate in the race on bad trade deals,” campaign manager Robby Mook said in a conference call with reporters.

During the campaign, Clinton has distanced herself from the TPP and opposed it after the final version came out. She has said wants to close tax loopholes that encourage companies to move overseas and institute a “clawback tax” to prevent companies from evading taxes by moving to countries with lower tax rates. She has called for cracking down on currency manipulation in China, which many economists say is a major driver of unequal trade relations. And her aides point to a tough standard on trade agreements that she used to evaluate the TPP.

And Clinton has strengthened her language in recent days to undercut criticism from Sanders, saying in Youngstown, Ohio, on Saturday, “we are going to enforce trade agreements.”

“I will stand up for companies in Ohio,” Clinton continued, speaking at an old steel mill parts manufacturer. “I am really, totally committed to bringing back manufacturing. I’m the only candidate on either side who actually has a plan to do that.”

-With reporting by Philip Elliott in Vienna, Ohio. 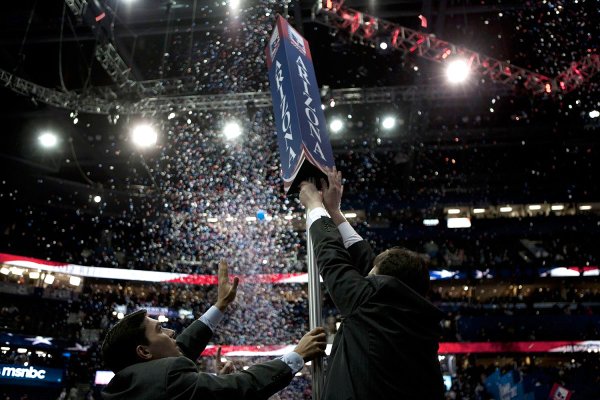 Why a Contested GOP Convention Just Got More Likely
Next Up: Editor's Pick