Why a Contested GOP Convention Just Got More Likely

Republican voters handed down a split decision Tuesday that suggests the race for the party’s nomination will go all the way to Cleveland, raising the prospect of a contested convention that could tear the GOP in two.

Donald Trump padded his delegate lead by grabbing the night’s biggest prize, a blowout victory in Florida that knocked Senator Marco Rubio out of the race. Trump also snagged victories in Illinois and North Carolina and appeared set to eke out a fourth win in Missouri as the final returns trickled in late Tuesday. But his failure to deliver a knockout blow in Ohio gives him an uphill fight to secure the 1,237 delegates required to win the GOP nomination outright.

Ohio Governor John Kasich’s victory in the Buckeye State and Texas Senator Ted Cruz’s string of second-place finishes all but guarantee that both will stay in the race for the foreseeable future, racking up delegates at Trump’s expense. “We are going to go all the way to Cleveland and secure the Republican nomination,” Kasich told his crowd as he logged his presidential campaign’s first statewide win.

The prospect of a contested floor fight in July would be remarkable in modern electoral history: not since 1952 has a party arrived at a nominating convention without a presumptive winner. Party insiders’ determination to stop Trump could spur them to wrest away the crown, and the spectacle would create chaos for the GOP. Any move to block Trump’s coronation would be met with open revolt by the candidate’s fervent supporters.

“There will be such fury. There will be riots in the streets. It will be like France in the 1700s,” said Lison Drummond, a 74-year-old retiree from Grosse Pointe, Mich. “There’s no way they can take it away from him. The people will not stand for it.” It’s a threat the party can’t take lightly given the pattern of violence emerging at Trump’s campaign events. Security is always tight at conventions. They might need it in Cleveland.

Still, if Trump fails to notch a majority of bound delegates, the swath of the party that seems desperate to stop him will have the power to do it — so long as they’re willing to risk the party rupturing in the process. And the math and the map now suggest that Trump’s foes may get that chance.

Despite his comfortable lead, Trump remains a weak front runner, lagging both John McCain and Mitt Romney’s pace at a similar point in the 2008 and 2012 cycles. In order to sew up the nomination before Cleveland, Trump has to win roughly 55% of remaining delegates. The majority of the remaining 21 contests award delegates proportionally or by congressional district, with only six winner-take-all contests left. Some of those states are favorable to Trump, including Arizona on May 22 and New Jersey on June 7, the last day of primary voting. Kasich has indicated he’s also looking to put New Jersey into play, and his advisers are studying Trump’s record at his Atlantic City casinos.

Trump’s strength has so far been in open primaries and Southern states. But the complexion of the remaining contests isn’t quite so favorable. The South is done voting, and 14 of the remaining 22 contests are closed primaries — a format where Cruz has performed better. Trump has been beatable in the Midwest and Rocky Mountain states, where Cruz and Kasich should combine to peel away big chunks of delegates.

Kasich has added a new line to his standard campaign fare, promising to head West: “We’re going to rent a covered wagon,” he said Tuesday, presumably as a joke. His victory in Ohio, coupled with Rubio’s exit, could infuse Kasich’s sleepy campaign with momentum and money, making him a player in upcoming states like Pennsylvania, Wisconsin, Indiana and West Virginia, as well as the more moderate Northeast.

The contest now turns to Utah and Arizona, which vote on March 22. Trump is favored in the winner-take-all Arizona contest but is an underdog in Utah. After that, the race enters a “spring break” hiatus, with only about 100 delegates being awarded over the course of a month. That puts pressure on the remaining campaigns’ organization and pocketbooks to stay alive as momentum fades.

“No candidate will win 1,237 delegates,” John Weaver, Kasich’s chief strategist, wrote in a memo Tuesday night. The assertion was aimed at Trump, who is almost certain to roll into Cleveland with a plurality. But Kasich has no feasible route to that magic number. Cruz, who needs more than 70% of remaining delegates, has an only slightly more plausible path. His campaign spent much of Tuesday evening encouraging Kasich to follow Rubio’s lead and quit the race in hopes of setting up a one-on-one showdown with the businessman. Still, some Republican strategists see the three-man race as beneficial to the aim of stopping Trump, with Kasich and Cruz triangulating the front runner by catering to opposite sides of the party’s ideological spectrum.

The Kasich campaign at this point is ignoring the delegates. “This has happened eight times since the 1800s, in both parties. Six of the eight times, the guy coming in with the most delegates did not win the nomination. I’ve learned a lot recently,” Weaver said. Instead, Weaver plans to whip delegates on a simple argument: “Donald Trump will get his ass kicked by Hillary Clinton.”

“We’re raising a ton of money. We’ve run this campaign with $7.5 million. We’re not going to have to worry about that anymore,” Weaver told TIME at Kasich headquarters, where his longtime advisers and supporters packed a college gymnasium. After Kasich declared victory, confetti rained down. After a similar effort in New Hampshire, Kasich razzed aides that their efforts were weak. “We decided we would bury him tonight,” one advance staffer said.

Trump and Cruz have stepped up their efforts to prepare for a contested convention in recent days as the prospect appeared more likely, with the campaigns focusing on trying to identify delegates who will shift their way after the first convention ballot.

And every delegate will count. Trump’s rivals are already laying the groundwork to argue that should Trump fall far short, a majority of Republicans will have voted against his candidacy. But if the front runner falls less than 100 delegates short of the majority threshold, most GOP operatives predict the anti-Trump forces will admit defeat rather than risk a floor fight that would face dubious prospects and potentially create a permanent rift in the party.

Beyond the spectacle of a floor fight, there are organizational consequences to these internal divisions. The eventual nominee typically starts setting up political operations months in advance. Without assurances that any one of them will be the nominee — and have the funding to pick up the tabs for offices, staff and technology — the eventual standard-bearer will be at a disadvantage.

Hillary Clinton already has a cruise ship’s worth of staff at her Brooklyn headquarters, and her in-state operations began last year. Defeating Clinton requires a unified Republican front, starting now.

That, maybe, might overtake the millions of votes that have been cast for Trump. If there is anything that can bring together a fractured party, it is Republicans’ disdain for Clinton. 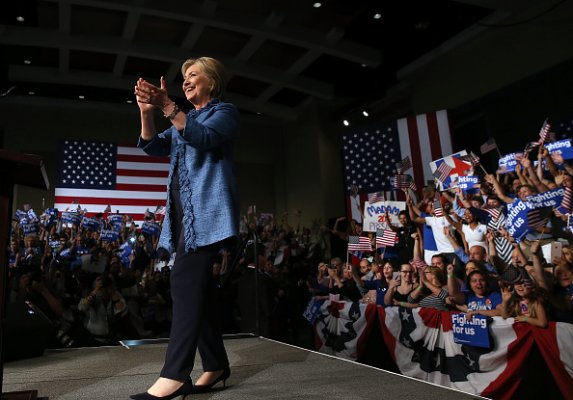