John Carmack Told Us What Makes Minecraft VR So Special

Minecraft for Samsung’s Gear VR is happening, and here’s the weird part: there’s no official announcement. It’s just happening, sometime this spring, which is also the timeframe Microsoft has promised to roll out a version for the much pricier Oculus Rift.

I had a chance to take a near-final version of the game for a spin at a special Oculus-helmed Game Developers Conference event in San Francisco on March 15. It looks fantastic—effectively as sharp and responsive and immersive as on the Rift. Considering the Rift is going to cost $600 when it launches on March 28 and require a high-end PC to boot, that’s kind of a big deal. Gear VR costs just $100, and requires a Samsung Galaxy smartphone you may already own.

At one point Oculus VR chief technology officer John Carmack (co-creator of video game classics like Wolfenstein 3D, Doom and Quake) addressed those gathered to demo the game, explaining why he got involved with Minecraft on Gear VR. He said that he thinks the budget VR headset already trumps Rift because you can swivel 360 degrees without tangling yourself in cables.

Oculus’ original vision for virtual reality had focused on designing comfortable experiences that “minimized the likelihood of anyone getting sick,” said Carmack. “So we had all these experiences where people sat down and things happened around you.”

“I kept rebelling against that, saying ‘That’s not what I want to do in VR,'” explained Carmack. Instead, he said he wanted to explore new worlds, adding that “Minecraft hits all of those buttons very very well.”

Microsoft isn’t saying whether existing Minecraft mobile owners will get the VR version for free, or if it’ll be sold as something standalone. But spring is right around the corner. 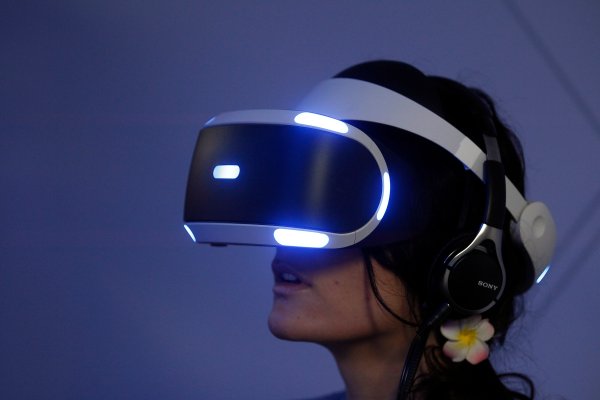 5 Things Sony Told Us About PlayStation VR
Next Up: Editor's Pick