Students attend a rally at the University of Hong Kong's the campus on the first day to boycott classes on Jan. 20, 2016, in Hong Kong
Bobby Yip—Reuters
By Simon Lewis

A leading student magazine in Hong Kong has issued a statement in favor of the territory gaining independence from China, as a growing movement to push back against perceived encroachment by the mainland continues to gain traction.

The Chinese special administrative region’s administration and establishment dismiss any discussion of an independent Hong Kong as unrealistic and potentially dangerous in inviting a backlash from Beijing. But many — especially the young — are unhappy that cherished individual freedoms and the rule of law are at risk from China’s growing influence.

The latest issue of Undergrad, the magazine by students at the University of Hong Kong — the city’s oldest and most prestigious higher-education institution — includes a 60-page manifesto that sets out a youth-oriented vision for the future, including independence after 2047, the year when China’s guarantee of a “high degree of autonomy” for Hong Kong expires. The demand for independence is unprecedented in China.

The magazine’s editor, Marcus Lau, tells TIME that the statement — drafted by the magazine’s editorial board, which is headed by editors elected by students — was modeled on the 1962 Port Huron Statement that set out student activists’ positions at the beginning of a decade of demonstrations in the U.S. He said that the Undergrad statement reflected a shift among many University of Hong Kong students, and among the city’s youths more broadly, to embrace a nascent movement of Hong Kong localism — an umbrella term used here to refer to a belief in far greater autonomy for Hong Kong, at the very least, but covering separatist positions also. “I would say it’s emerging and it’s expanding in the young generation,” says Lau.

“People have lost all their confidence in ‘one country, two systems.’ They want a genuine democracy,” he added. “People don’t see themselves as Chinese. They see themselves as Hong Kongese. They don’t have much connection with China and they don’t share a sense of nationalist sentiment with China.”

Localism has been a growing force since almost three months of massive protests in 2014, dubbed the Umbrella Revolution, failed to achieve their aim of securing a more democratic mechanism for electing the next chief executive. Several student unions have elected pro-independence leaders, and the University of Hong Kong itself has been roiled by demonstrations opposing the appointment of a new council chairman seen as a Beijing loyalist.

Speaking to TIME before the latest Undergrad publication, Michael Davis, a law professor at the University of Hong Kong, said that “independence” had rarely been discussed during previous Hong Kong protest movements, but was a growing issue since authorities were unresponsive to calls for more autonomy, he said. “Some people start to think ‘well, we’ve spent 30 years trying to live by the script, and it hasn’t worked,’” he said, “so they’re going to demand something greater.”

Localist sentiment exploded onto Hong Kong’s streets in early February, when crowds clashed with police over an insensitive attempt by authorities to clear unlicensed hawkers selling snacks on the Lunar New Year holiday — seen by many as an attack on a cherished Hong Kong tradition. A localist leader — one of almost 50 people charged with rioting for the incident — later made an impressive, but unsuccessful, showing at a by-election for a seat in Hong Kong’s legislature.

Chinese officials and the administration of Chief Executive Leung Chun-ying have issued robust denouncements of the localists. Leung has previously targeted Undergrad specifically for even discussing the possibility of Hong Kong becoming an autonomous city-state. On Tuesday, he was reported by the South China Morning Post as saying that the territory would not get independence. “Hong Kong has been a part of China since ancient times, and this is a fact that will not change after 2047,” the chief executive said. 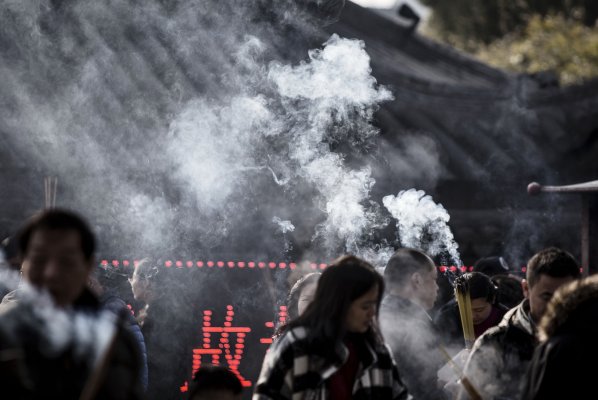 Life in Purgatory: Buddhism in China
Next Up: Editor's Pick