Life in Purgatory: Buddhism Is Growing in China, But Remains in Legal Limbo

Yan Lu studied Marxism-Leninism in college, majoring in ideological and political education. After graduating from the prestigious Southwest Jiaotong University in the Chinese city of Chengdu, she worked at a kindergarten and as a secretary. Neither job satisfied her. Today, the 27-year-old lives as a Buddhist nun at the tiny Changxing Temple in a village near Beijing. She eschews cellphones, T.V. and the Internet, preferring to spend her time in quiet meditation. “Now Chinese people are richer,” Yan says, “but they urgently need more spiritual life.”

China’s religious revival, born of the failings of both communism and capitalism to provide adequate meaning in Chinese lives, has been well-documented. While Chinese have flocked to Confucian temples and Christian churches, the biggest beneficiary is Buddhism. Official statistics don’t exist, but the Pew Research Center, which surveys religious belief worldwide, estimates some 245 million Buddhists in China, around 18% of the total national population. Another 21% of Chinese adhere to folk religions that often incorporate Buddhist beliefs, according to Pew.

Like other faiths, Buddhism, which travelled to China two millennia ago from India, was targeted during the Cultural Revolution. The Changxing temple was razed. Former village head Zhang Qian, from a Buddhist family himself, remembers how his hands shook as he used a hammer to destroy the temple’s clay Buddhas. In Beijing alone, among 6,843 registered cultural relics, 4,922 were ruined during the Cultural Revolution. More than half a million antiques were destroyed. Buddhist monks were tortured and sacred books burned.

Even today, despite the ruling Communist Party’s generally welcoming attitude toward Buddhism, Changxing is not an officially sanctioned temple because registering for various religious licenses is a complex process, often dependent on the grace of powerful officials from the State Administration of Religious Affairs. Therefore, the temple—a few bare rooms, some old stone tablets, a huge incense burner covered with rust, and a poplar tree reputed to be 1,000 years old—is technically illegal. Thousands of temples across China that lack official paperwork have been similarly left in limbo. (Islam and Christianity face far more overt pressure from the ruling Communist Party, which in recent months has torn down churches and prevented Muslims from worship.)

But raising funds to restore the temple is tricky. “Without the official licenses, it’s hard for us to accept money from lay Buddhists,” says the temple master, who spent around 20 years as a nun at one of China’s holiest Buddhist pilgrimage sites, Mt. Wutai. “They are eager to see a restored temple here, but I can’t accept the money. It’s sensitive. Sometimes the money issue can bring trouble.”

For fellow nun Yan Lu, who studied ideological education during her school years, the separation of temple and state is crucial. “Now our government is using Marxism-Leninism to run the country,” she says. “In ancient times, some emperors used Buddhism to govern the country. But I think when a religion is too close to a government or powerful entrepreneurs, it can’t really be prosperous, and there will be too many restrictions. I think Buddhism should keep away from the government”

The Business of Buddhism

Nepali businessman Puru Sottam, whose company is called Buddhaland Cargo, has marketed his wares across China for a decade. “My business has grown in recent years in China,” he said, as he offered incense burners, cushions and carpets at the Beijing fair. “There are more and more Chinese believers.” After the Beijing exhibition, he headed south to the cities of Wuhan and Shanghai to sell his ceremonial objects.

Many officially registered temples, however, have expanded rapidly. (Tales also abound on Chinese social media of fake monks bilking wealthy believers out of cash.) One of the most advanced is Longquan Temple, on the outskirts of Beijing. Hundreds of people flock to the temple each weekend to attend Zen camps. Volunteers with the temple’s technology team, some of whom come from China’s top Tsinghua and Peking universities, have even designed robots that can help answer questions about Buddhism. Meanwhile, a noodle shop outside Longquan Temple, for instance, boasts noodles cut by robots. Its abbot, Xuecheng, also happens to be the President of the Buddhist Association of China. He has nearly 345,000 followers on Weibo, China’s domestic version of Twitter. (Xuecheng refused an interview with TIME, shortly after a worshiper—a recent graduate from Tsinghua University—fell from a fifth-floor staircase during a blindfolded meditation activity.)

Former waiter Deng Shaojie spent a week at Longquan in late December. He got a new, Buddhist name out of it — Hui Jie, meaning “wise and excellent” — and he enjoyed the ascetic lifestyle, waking before 4:00 a.m. and going to sleep at 9:30 p.m. Longquan’s rules are clearly printed on red slips of paper handed out to everyone who wants to reside there. “Love our country, love Buddhism,” says one, while another prohibits women from wearing off-the-shoulder tops. And although weekend sermons by monks are broadcast live online, computers are banned in the dormitories.

Meanwhile, at the more humble Changxing temple, a huge picture board shows what the ancient temple, believed to be 959 years old, may have once looked like: rows of magnificent, crimson-hued buildings garnished in gold. After April village elections, Miao Feng hopes to apply again for official status.

“It’s not just about one bureau or one department of the government,” she says. “There are many believers in our region, and more and more people from all over China come to visit. I wish we could do more to promote Buddhism. ”

Earlier this month at the annual meeting of the National People’s Congress—China’s rubber-stamp parliament—Sheng Hui, a delegate who is also the vice president of the Buddhist Association of China, told domestic media that he hoped the government could formulate a new religious law as soon as possible. “Some powerful people take away the temples’ tangible and intangible assets,” he complained to China.com, a state-media website. “It’s hard for Buddhists to protect their own rights…[because] there is no religious law in China.” At present, there is only a “regulation on religious affairs” that was issued in 2004; the policy lacks legal teeth.

But even as Sheng campaigned this month for more religious clarity for his fellow Buddhists, the Chinese Communist Party’s important Organization Department last month banned retired officials and cadres from believing in any faith at all. China’s constitution may technically uphold religious freedom but party faithful—even retired ones—are out of luck. 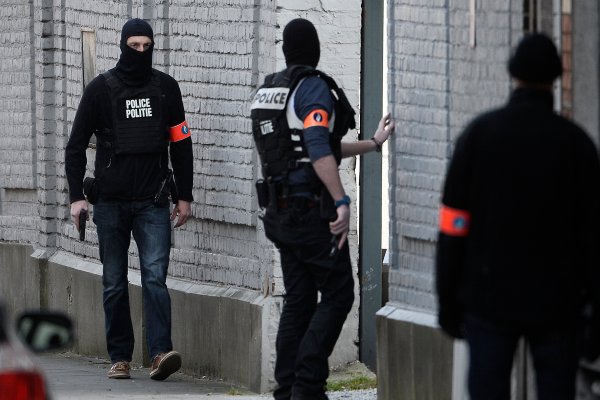 Brussels on High Alert
Next Up: Editor's Pick