Donald Trump won big Republican primary victories in North Carolina, Illinois and Florida on a day dubbed “Super Tuesday 2,” leading Senator Marco Rubio to withdraw from the race after losing his home state. But the real estate magnate lost Ohio to its Governor, John Kasich, complicating his path to the presidential nomination.

The youthful Rubio, once heralded as the future of the Republican Party, had framed himself a truth-teller who had presented a realistic and hopeful vision in a campaign season dominated by economic anxieties and anti-incumbent anger. But he acknowledged Tuesday he had misjudged the electorate.

“While it is not God’s plan that I be President in 2016, or maybe ever, and while today my campaign is suspended,” Rubio told supporters gathered in Miami, “the fact that I’ve come this far is evidence of how special America truly is.”

Hillary Clinton was the big winner on the Democratic side, winning Florida, Ohio and North Carolina over populist rival Bernie Sanders. Her victory in Ohio was particularly important for her after a loss in Michigan a week earlier. She shifted her message on trade, an issue that 53% of Ohio Democrats told exit pollsters killed jobs. Clinton ran even with Sanders among those voters—an improvement over her 15-point loss on the same question last week.

In Ohio, Gov. John Kasich carried a state that he said either would give him a win or an exit from the race altogether. It was Kasich’s first win in this campaign and would do little to help his odds of becoming the nominee. Yet it was a key rejection of Trump’s message.

“We put one foot in front of the other,” Kasich said of his slow-to-catch-fire campaign. “And I want to remind you again tonight that I will not take the low road to the highest office in the land.” That sunny tone won him applause but has yet to prove it can win beyond his backyard among voters who was cheered for Trump’s blunt bullying.

Kasich’s campaign tailored to his neighbors. Only 8% of voters listed immigration as their top concern; Trump’s campaign has been powered by a strong rhetoric against immigrants in the country illegally, and he easily won over those voters. But they did little to compete against questions about the economy (the top issue for 38% of voters), government spending (29%) and terrorism (21%). Kasich carried a plurality of those voters. Kasich also carried voters with higher education levels and incomes, according to the exit polls.

Ohio Republican Party Chairman Matt Borges, a Kasich ally, said his victory would “set this race on a whole new course.” Added Ohio Attorney General Mike DeWine: “It resets. It begins again.” For his part, the candidate said he would continue fighting. “We are going to go all the way to Cleveland and secure the Republican nomination,” Kasich said.

But Trump is still closer than anyone else to the nomination, adding wins in Illinois and North Carolina to his tally. He now sits on a pile of delegates, and any of his competitors would need a miracle to match them. For Trump’s opponents, at this moment, the goal is more about denying Trump the 1,237 delegates required to capture the nomination when the party leaders, activists and donors arrive in Cleveland for the GOP’s convention.

The math simply isn’t on the side of those looking to stand between Trump and the nomination. With Kasich prevailing in Ohio, Trump needs to win just 40% of the remaining delegates to become the nominee. That is likely to happen on June 7.

Meanwhile, Ted Cruz was looking to be competitive in Illinois, Missouri and North Carolina. All three states allocate delegates proportionally, and Cruz was banking on a series of strong second-place finishes. The Texan is in second place in the delegate race, but he would need a serious string of surprises to win the nomination. 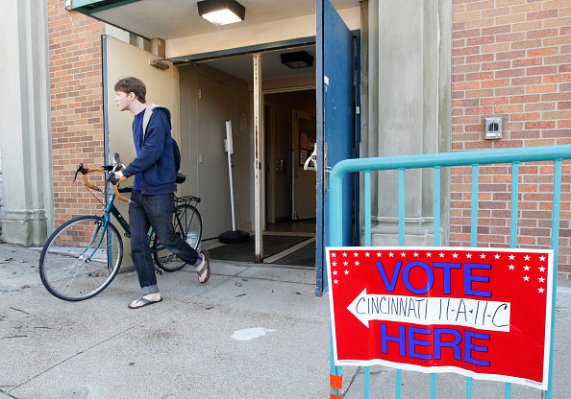 Here's What States Voting Tuesday Are Saying Online
Next Up: Editor's Pick