Why Donald Trump's Endorsements Have Been Unusual

Donald Trump has defied expectations throughout the election cycle, consistently thwarting political predictions and breaking every rule in the traditional campaign playbook. His endorsements have been just as unusual.

For one thing, endorsements are typically full-throated. If a politician is going to spend capital on a candidate, it makes sense to do so confidently. But some of Trump’s endorsers have equivocated on the bombastic front-runner, even as they publicly pledged to support him.

Take Ben Carson, the retired neurosurgeon and former 2016 presidential candidate who endorsed Trump Friday. Even as he stood on stage to announce his endorsement, he stepped back a bit from Trump’s controversial persona.

“There are two different Donald Trumps. There’s the one you see on the stage and there’s the one who’s very cerebral, sits there and considers things very carefully,” he said.

Carson went even further on Monday, telling Newsmax TV that if Trump turns out to be a terrible president, at least “we’re only looking at four years as opposed to multiple generations and perhaps the loss of the American dream forever.”

He’s also been shockingly open about the political calculus behind his endorsement of Trump instead of Ohio Gov. John Kasich, Texas Sen. Ted Cruz of Florida Sen. Marco Rubio—the kind of strategic discussion that is rarely publicly discussed.

“I didn’t see a path for Kasich, who I like, or for Rubio, who I like. As far as Cruz is concerned, I don’t think he’s gonna be able to draw independents and Democrats unless has has some kind of miraculous change… Is there another scenario that I would have preferred? Yes. But that scenario isn’t available.”

Endorsements are also typically among the smoother parts of a campaign rollout, since there aren’t any unpredictable elements, like election night results or debates.

But when New Jersey Gov. Chris Christie endorsed Trump in late February, he appeared so dour at the press conference that people on Twitter jokingly speculated that Trump was keeping him prisoner and Christie was moved to note that he was there of his own free will.

“I wasn’t being held hostage, I wasn’t upset. I wasn’t angry. I wasn’t despondent,” Christie clarified after the press conference.

Finally, endorsements are usually a mutually beneficial arrangement, good for both sides. But many people who have decided to publicly back Trump have ended up hurting themselves in the process.

Jerry Falwell Jr. was one of Trump’s first and highest profile endorsers, a leader in the evangelical community and president of Liberty University. Falwell endorsed Trump in January, and while he said it was a personal endorsement and not on behalf of the college, he’s received backlash from the campus community. One prominent board member in particular who served as chief of staff to Falwell’s father has been vocal about his outrage.

“The bullying tactics of personal insult have no defense — and certainly not for anyone who claims to be a follower of Christ,” Mark DeMoss told the Washington Post of Trump’s candidacy. “That’s what’s disturbing to so many people. It’s not Christ-like behavior that Liberty has spent 40 years promoting with its students.”

While Falwell has faced criticism from his school, Florida Attorney General Pam Bondi may have bigger problems on her hands. Bondi endorsed Trump in March, becoming the first major Republican official in Florida to back him. According to the Miami Herald, this new public link between Bondi and Trump is raising questions about why the Florida attorney general’s office didn’t investigate fraud complaints against Trump University in 2013.

Some are even backing away from the endorsement itself. Former Major League Baseball player Pete Rose sent Trump a baseball with the inscription, “Mr. Trump, please make America great again” and his signature, according to a tweet from Trump:

While this may not have been an official endorsement, it seemed to be a sign at least of Rose’s support for the candidate. But Rose’s attorney told the Washington Post, “We do not know how Mr. Trump got the ball,” and that “Pete has made a point not to ‘endorse’ any particular presidential candidate. … Any outlet that misinterpreted a signed baseball for an endorsement was wrong.”

In the case of another famous professional athlete, Trump even preempted the controversy, seeming to understand the fraught nature of being aligned with his candidacy.

NFL quarterback Tom Brady has voiced support for Trump in the past, but Trump said he told the football star not to officially endorse him. “I said, ‘Don’t do that, because you may have a sponsor that doesn’t like me,'” Trump said of Brady, CBS reports. “They may be liberal, they may be something. And I don’t want him to get involved in that stuff.” 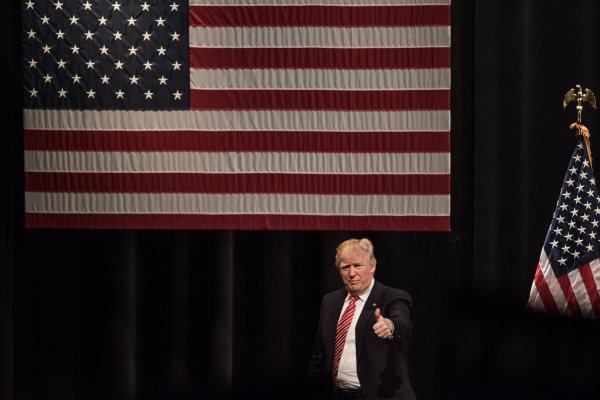 Donald Trump Says Republican Leaders Would Support Him as Nominee
Next Up: Editor's Pick