I remember years ago hearing from successful older women like Jane Fonda and Candice Bergen that aging was a blessing. They were happy to finally own who they were, feel comfortable in their own skin, stop trying to please everyone else and start living for themselves.

Every year, I’d blow out my candles, hoping this was the year I’d be so blessed—that my rising age might magically allow me to love my belly, to have the courage to ask for a raise, to stop hesitating before sharing my honest opinion. But I was cornering my mid-30s, and it wasn’t happening.

I was still spending a lot of bandwidth attempting to neutralize the gaze of disapproval I constantly felt looming over me. I had created an imaginary court of coworkers, family members, friends, Apple Geniuses and the like who ruled over my psyche, giving me the distinct impression that I was doing it all wrong. That I wasn’t worthy of my Honda Accord, let alone expressing my opinion. Who did I think I was? After all, I didn’t even graduate college.

That’s how I put it for years. “I didn’t graduate,” or, “I went to KU,” leaving out the fact that I was only there for a year. The truth was, I was asked to leave college. Kicked out, to be blunt. When my parents saw my report card, they figured there was a typo in my GPA. Shouldn’t there be a number in front of the decimal point? That’s what happens when you stop going to class after midterms—you end up with a .9 GPA.

Watch some of the world’s most powerful women share their personal mottos:

No, I hadn’t been out partying every night, but I did have a problem with addiction. To my VCR. The local video store let you rent 10 movies for 99 cents. The only catch was, they had to be returned in 24 hours. They were, of course, banking on my returning them late and racking up fees. But they underestimated my movie-watching stamina and complete lack of interest in attending my classes. I guess you could say I was on the cutting edge of the binge-watching craze back in ’93. How was I expected to go to Algebra 101 when I still had Doc Hollywood to finish?

I realized my behavior was irresponsible and an insult to my parents, who both worked very hard to give me an experience they didn’t get. But I couldn’t get past the feeling that college wasn’t for me. I wasn’t a sorority girl, I was overwhelmed in a lecture hall and I was definitely not destined for med school. I did like performing arts and theater. Ah, who am I kidding? I liked Melrose Place.

Lured by the glamour of Hollywood and the possibility of meeting actor Andrew Shue, I decided at 20 to move from Kansas to Los Angeles to, well, I didn’t know what exactly. To “work in the entertainment industry” was as close as I could come to defining my goal.

A decade later, I was working prolifically as a Jane of all trades: Waitress, hostess, receptionist, event planner, makeup artist, production assistant, executive assistant, writer’s assistant, assistant’s assistant. Yes, I was “working in entertainment,” but it certainly didn’t feel like I was inching closer to success. My friends and coworkers held fancy titles and had parties to celebrate their promotions, while I felt destined to remain on the bottom rung of that insurmountable career ladder. Might as well flip on Doc Hollywood and call it a day.

In 2005, I interviewed to be the assistant to Jenji Kohan. At the time, Jenji was running the show Weeds, which was heading into its second season. The job required tasks anyone who’s worked in an office can do: Make coffee, order office supplies, reset the Wi-Fi. But during my interview, one of the show’s other producers asked if I would also be cool with “scoring 8 balls for the writers.” He was kidding (I think), but I took the question in stride and joked back, “Sure. I’ve got a guy.” I think what Jenji liked about me was my sense of humor and that I watched Weeds and many of the other shows she had written for. I was an unabashed fan of TV, which was still thought of as film’s ugly stepsister. (To say you loved TV back then was like admitting today that you eat GMO foods.) I got the job.

Read more: 6 TED Talks That Will Boost Your Creativity

I worked in various capacities with Jenji from then on and felt personally and creatively fulfilled. Ten years later, I am a writer and producer on Orange Is the New Black, as well as Jenji’s producing partner.

But in the beginning, I struggled to feel that I was a success. I was still measuring myself against my peers. I was beating myself up over not finishing school. That inner court of judges was screaming at me for leaving a good gig as a story producer in reality TV to take a step back as an assistant in the scripted world.

Read more: Sportscaster Amber Theoharis: How to Succeed in a Male-Dominated Industry

It was actually Sheryl Sandberg’s perspective on forgoing that career ladder and embracing the career jungle gym that helped shift my view. My own journey on the jungle gym had gone up, down, over, diagonal, back down, upside down and down some more. With this new mindset, I was able to see that the downs were just as important as the ups.

College isn’t for everyone. My unconventional background, something I stressed over, turned out to align with what Jenji needed in a partner. It prepared me to be a good storyteller, to be flexible and observant.

Breaking free from these standards of perfection that we set for ourselves doesn’t have to wait. We only need to accept that all our parts are worthy of respect, and that can start right now. It isn’t about a traditional or non-traditional career path but that there should be no traditions when it comes to finding success. Like my son tells his toddler sister when she escapes with the entire bag of Doritos, “Go! Live your best life!”

Tara Herrmann is a writer and executive producer for the award-winning Netflix series Orange Is the New Black. She also works on multiple other projects with her producing partner, Jenji Kohan. 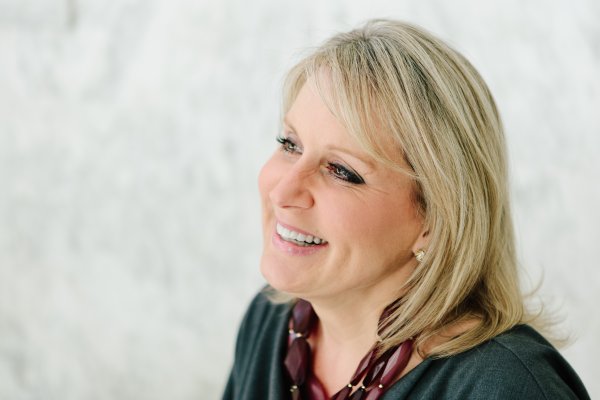 Rep. Renee Ellmers Shares the One Piece of Advice That’s Inspired Her Throughout Her Career
Next Up: Editor's Pick