House of Cards Knows Exactly What Kind of Show It Is

Because House of Cards, like all Netflix series, drops entire seasons in a single go, it’s been hard to figure out quite how to write or talk about the series. An article like this one, appearing about a week and a half after the show’s fourth season launched, comes too late for many of the show’s fans; they’ve digested the season already and moved on. For others, it’s too early, possibly by years—since Netflix’s entire strategy is to build up a library of content that viewers can watch anytime.

This confusion over how to talk about Netflix shows tends to lead to overpraising by default. There’s so little coherent conversation about the shows’ faults that series like the uneven Orange is the New Black or the objectionably bad Unbreakable Kimmy Schmidt get treated as masterful. The same thing has happened with House of Cards over its run. Its first three seasons were all nominated for Best Drama Emmys, while series leads Kevin Spacey and Robin Wright have both won Golden Globes, which is a wild overreaction to a show that has no particular desire to be “good” in the way, say, Mad Men or Better Call Saul are good. But in its fourth season, more than ever before, House of Cards is embracing its silly side. It’s not the best drama on TV, but it knows enough to know that such a title would be no fun.

The show’s new batch of episodes abandon any pretense of being concerned with policy, a welcome change after “America Works” and a Vladimir Putin stand-in weighed down the third (and worst) season. Instead, they rearrange familiar characters into new permutations; in one of the season’s most successful dramatic conceits, various journalists from the show’s early going re-emerge, like ex-husbands of Erica Kane, to commit acts of violence or of plot movement. Meanwhile, new characters ranging from the First Lady’s charmingly ruthless strategist (Neve Campbell) to the irritatingly perfect Governor of New York (Joel Kinnaman) exist to complicate our protagonists’ plans. Nothing in the show is unconnected from the quest to maintain power. There is no moral or political argument, just, perpetually, more story to unspool. “Power is fun to have and to acquire” isn’t meant to be an idea to explore—it’s just a jumping-off-point for narrative, and the show’s writers take full advantage.

This is not to say that the show has absolutely no insights into contemporary politics. Anyone who doesn’t see something familiar in Kinnaman’s character, a rising star whose acuity with social-media thinly covers a vacuous ambition, isn’t paying attention. And the characters are (slightly) more than pawns on a chessboard: I’ve grown more and more interested in the particular vanities of journalist Tom Yates (Paul Sparks), a self-styled man of the people who’s fairly easy to buy. But since it began, the show has made no pretense about the fact that its goal is to entertain, rather than to enlighten or comment. This makes reactions like a recent Washington Post critique puzzling; the writer, Alyssa Rosenberg, alleges a sort of bad faith whereby the show “look[s] like the sort of show that we should take seriously” but is, in fact, not.

The signifiers that Rosenberg sees, and that many other viewers do as well, as part of the show’s bid for prestige strike this viewer as either value-neutral or part of what makes the show so goofily bad. Rosenberg cites the show’s prestige-y cast, and it’s true that Kevin Spacey is a two-time Oscar winner. But his performance on the show—so over-the-top and willing to court outright failure as to verge, at times, on the unhinged—matters more than whatever dubious cultural cachet his name adds. His soliloquies are meant to be taken as more peppery than insightful. As for the show’s unremittingly dark visual style—well, are shows with little on their mind supposed to be lit badly to tip us off that the show is unworthy? The show’s aesthetic style is as engaging as the show it (often fails to) illuminate. Sometimes a dimly lit room is symbolic of nothing but itself.

That’s, I think, where people get a bit tripped up with House of Cards; the serious viewer of TV has spent so much time with Mad Men and shows like it, these densely packed texts that are the product of deep and thoughtful research and writing. The prestige show of the 2000s and 2010s hasn’t just been a show that is good—it’s been a show that stands up to scrutiny, recaps, rewatchings, and divergent interpretations. House of Cards, by contrast, is so bluntly straightforward that it seems almost to be hiding something. Is it a parable about the Clintons? (This reading has grown strangely widespread, despite obvious differences between Claire Underwood and Hillary Clinton in particular.) An allegory about Washington dysfunction, or a condemnation of political greed? A show attempting to climb to the top of the prestige-TV heap?

I’d argue it’s none of those things, and that it’s playing a different game entirely. House of Cards, in its fourth season, doles out plot developments with a heavy hand. That some of those plot developments (particularly, one pertaining to an ISIS stand-in) are heavy stuff is the nature of the setting, but the show ultimately maintains its balance in doing exactly what it sets out to do: Compelling the viewer forward like the best airport novel or pulp movie. No show that leans as heavily as this one on murder or the threat of murder has much to say about politics as currently conducted.

There are enough shows on the dial that deal with the nature of politics, so it’s no sin at all to have one show that uses politics as a jumping-off-point for madness. The fact that the calories are empty doesn’t make them any less delicious. That the show is smart enough to know what it wants to be doesn’t make it dumb. 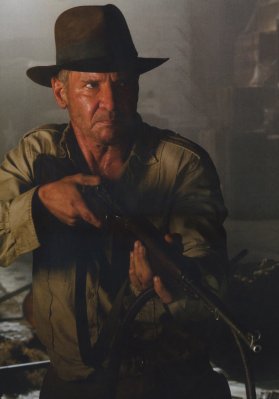 Harrison Ford Will Star in a New Indiana Jones Movie
Next Up: Editor's Pick