Why Tuesday Could Determine If Trump Wins

In the battle to stop Donald Trump, Tuesday marks the turning point.

If Trump romps through the five states and one territory where voters will head to the polls, it will be nearly impossible for Republican opponents to deny him the nomination. A setback would darken Trump’s prospects of grabbing the outright delegate majority he needs to secure the nomination, kicking off a monthslong slog for delegates that could last until the GOP convention in Cleveland, where party bosses could knock the businessman off the top of the ticket.

On the Democratic side, Hillary Clinton and Bernie Sanders will fight for delegates in Ohio, Florida, Missouri and North Carolina, none of which is winner-take-all. Sanders is hoping to chip into Clinton’s significant delegate lead, particularly in the Rust Belt state of Ohio, while Clinton is expected to win big in Florida. After Clinton’s upset loss in Michigan last week, she is hoping to reassure supporters that she is on a smooth path to the convention and can win a broad swathe of Democratic voters, particularly young people.

But the big story of the night will be the pivotal Republican contests, which come at a moment of historic upheaval. With the last hopes of the Republican Establishment floundering in the polls and a pattern of political violence unseen in decades marring Trump’s public rallies, party officials and campaign strategists are desperate to seize their last best shot at stalling the front-runner’s momentum.

All of which makes March 15 the most important date remaining on the GOP nominating calendar. At stake are 361 pledged delegates, more than 25% of the 1,237 needed to win the Republican nomination.

The top prize is in Florida, where 99 delegates are at stake in a winner-take-all contest. Trump, is the prohibitive favorite, with a nearly 20-point lead in the latest RealClearPolitics polling average over hometown Sen. Marco Rubio. A victory in the Sunshine State would likely result in Rubio’s swift exit from the race, which has been one of Trump’s goals in recent weeks as they have traded personal insults.

But the big state to watch is Ohio, whose 66 delegates are also awarded in a winner-take-all format. As in Florida, a Trump victory would likely oust one of his three remaining rivals. Ohio Gov. John Kasich, who has yet to win a state and has staked the future of his candidacy on a home-field victory, leads Trump narrowly in the polls. But if Trump ekes out a victory it would deal a decisive blow to the “Never Trump” movement.

Also on the docket are primaries in Illinois, Missouri and North Carolina, as well as nine delegates up for grabs in the Northern Marianas territory. Of those contests, North Carolina is the only straight proportional contest, dividing its 72 delegates among the finishers. That means Trump, who leads in the state, will divvy up delegates with Texas Sen. Ted Cruz, the likely second-place finisher.

Missouri awards five delegates to the winner of each congressional district, along with nine for the winner of the statewide vote in a hybrid system that could either split the state’s 52 delegates or turn it into another winner-take-all. Illinois’ system is even more complicated, with 15 delegates awarded to the top finisher, and the remaining directly elected on the ballot in each congressional district.

The outlook in both Midwestern states is murky. Very little polling has been conducted in Missouri, which has an open primary (a format that has favored Trump) but is likely to have a majority of evangelical voters (a potential boon to Cruz). Cruz is hoping to pick off a passel of delegates there by winning its reddest districts. And while Trump leads in Illinois, Cruz has narrowed the gap in recent polls. The Texan spent Monday crisscrossing Illinois in a final push to siphon delegates from the more conservative rural sections of the state.

By the end of Tuesday, more than 55% of convention delegates will have been bound, a marker which in cycles past has proven to be the time when front-runners become likely nominees. But perhaps not this time. Despite his substantial lead, Trump is a weak front-runner. He’s underperforming Mitt Romney and John McCain at this point in their campaigns, and unlike past nominees he has a defined ceiling of support, with a substantial segment of the party determined to resist his candidacy.

If Kasich wins Ohio, Cruz springs an upset elsewhere or the field combines to peel away a bigger-than-expected chunk of delegates from Tuesday’s proportional contests, Trump will almost certainly fall short of the 1,237 delegates required to sew up the nomination. A Kasich win would propel him onward to moderate midwestern and northeastern states remaining on the calendar—like Indiana, Wisconsin and Pennsylvania—where his moderate tone and appeals to the business community could make a formidable opponent.

If Trump wins all five states, he still faces an arduous path to 1,237. Because so many delegates have already been awarded, Trump would still have to capture slightly over 50% of those remaining. The upcoming calendar works in his favor, with upcoming winner-take-all contests in western states like Arizona, on March 22, where his anti-immigration message should resonate, as well as a slate of delegate-rich Northeastern contests where Cruz—likely his sole remaining rival in this scenario—would be expected to struggle. But Cruz’s campaign says its polling shows that in the absence of Kasich and Rubio, the Texan would beat Trump in a head-to-head sprint to the finish line.

Trump is still the only Republican with a realistic shot at getting to 1,237. A contested convention looms if he falls short of that majority. Depending on the size of his lead, the party could resort to procedural rules to override the preference of a plurality of GOP voters, which could, in turn, spur an outright revolt that would further fracture the party. For the Republican Party, it’s a painful Sophie’s Choice. Roll the dice with Trump and hope his appeal to working class voters supersedes the distaste he sparks among minorities and women. Or be prepared to lose the general election standing up to him.

— With Sam Frizell in New York. 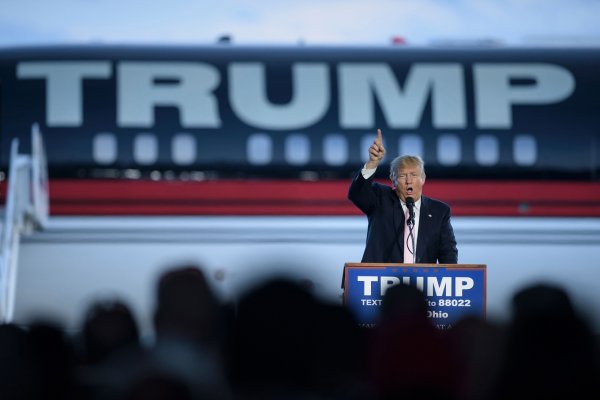 Why Donald Trump Is Turning on John Kasich in Ohio
Next Up: Editor's Pick