How J.K. Rowling's Magical History Stacks Up Against Real History

J.K. Rowling is treating Harry Potter fans to a collection of new original writing in preparation for the release of the Potter prequel film Fantastic Beasts and Where to Find Them. As the movie takes place in 1920s New York City, Rowling debuted four short stories on her site Pottermore, under the title of The History of Magic in North America.

Rowling’s Pottermore team declined to comment on the research that went into crafting the stories, but TIME talked to historians about how the author’s magical history stacks up against reality. And it turns out that, while Rowling’s world is one of magic, many of the details in the story are rooted in the actual past—for better or worse.

Rowling’s new series proved controversial from the start, when her account of Native American wizards mentioned the Navajo legend of the skin walker, a person who can turn into an animal. The mythology, she wrote, developed from stories of the witches and wizards known as Animagi in the Harry Potter world: “A legend grew up around the Native American Animagi, that they had sacrificed close family members to gain their powers of transformation. In fact, the majority of Animagi assumed animal forms to escape persecution or to hunt for the tribe. Such derogatory rumours often originated with No-Maj [Muggle] medicine men, who were sometimes faking magical powers themselves, and fearful of exposure.”

The skin-walker legend is in fact a real part of the historic and living Navajo culture—which is part of the problem. Dr. Adrienne Keene, whose website NativeAppropriations.com tracks popular representations of Native Americans, wrote that Rowling’s use of the phrase “the Native American community” was problematic from the start, as it erased the boundaries between different groups of people. “One of the largest fights in the world of representations is to recognize Native peoples and communities and cultures are diverse, complex, and vastly different from one another,” she explained. “There is no such thing as one ‘Native American’ anything. Even in a fictional wizarding world.” Keene also touched on the legend itself, which “has a deep and powerful place” in Navajo culture, writing that “it is not just a scary story, or something to tell kids to get them to behave, it’s much deeper than that.”

Andrew Needham, an associate professor of history at New York University who has read all the Harry Potter books, agrees that Rowling’s attempt to include Native American history in her stories was “troublesome,” as what Rowling calls “the Native American magical community” would encompass, in reality, more than 500 different federally recognized tribes and many unrecognized native groups. “Compare it to the treatment of Europe in her books,” he says. “France has Beauxbatons, Slavic Europe has Durmstrang, even the different houses of Hogwarts have distinctive traditions and histories. What you get here is caricature, and that kind of generalization always serves to simplify the beliefs of native peoples.”

That generalization has its own long history, he adds. “That Rowling felt able to do this is really part of a long history of colonialism where non-native folks are emboldened to borrow, invent and write about native beliefs without ever talking to actual native people,” Needham says.

On other topics, however, she gets relatively high marks from historians.

For example, Adam Winkler, a specialist in American constitutional law and a professor at UCLA Law, who has also read all the Potter books, appreciated Rowling’s attention to historical detail in what he saw as a reference to weapons licensing laws in the United States. Her final story goes into details of the flapper-era 1920s, a time when wands were under strict laws. In the story, “legislation introduced at the end of the 19th century meant that every member of the magical community in America was required to carry a wand permit, a measure that was intended to keep tabs on all magical activity and identify the perpetrators by their wands,” she writes. That timing sounds about right to Winkler.

“The United States in the 1920s and ’30s passed laws all over the country to restrict people from carrying dangerous weapons and she built on that. And, as I’ve come to understand it, a wand is a dangerous weapon as well,” he says. “It may be that wands were actually more regulated than guns at that time.”

Rowling—who has often prompted comparisons between her fiction and real history—also explored the Salem Witch Trials, writing that they “were a tragedy for the wizarding community” due to a group called Scourers, “an unscrupulous band of wizarding mercenaries of many foreign nationalities, who formed a much-feared and brutal taskforce committed to hunting down not only known criminals, but anyone who might be worth some gold.” The Scourers sound similar to the Death Eaters, as the group also “indulged a love of authority” and “enjoyed bloodshed and torture.”

Katherine Howe, a historian and author of historical fiction novels about Salem, found it intriguing to look at Salem through the Potter lens. “Nineteen people were put to death by the state legally, all done by the book, and I think a lot of people today still feel a very great sense of solidarity for the people who were accused in Salem. It raises our empathy, because we don’t want to imagine that our culture would do that to people,” she says. The Scourers function as a symbol of the authoritarian nature of life in 17th-century Salem.

But, Howe says, even as a historian she questions where the line is drawn, hoping that readers will look to this and any historical fiction as a way to be seduced into indulging their curiosity about history.

“I’m a little surprised to see [the real Salem trials] coming into the Harry Potter universe,” she says, “because one of the things people love about Harry Potter is that it’s such a departure from the real world.”

Most Popular on TIME
1
Potato Chip Heiress Back in Control of Fortune
2
How the 'Karen Meme' Confronts the Violent History of White Womanhood
3
U.S. Customs Seize Human Hair Weaves From Chinese Prison Camps 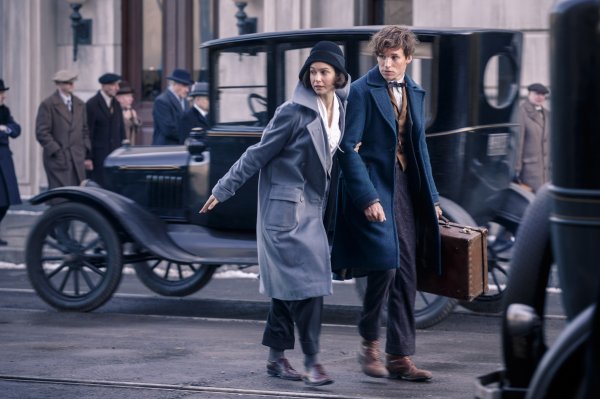