5 Tips For Your March Madness Brackets

Buddy Hield (#24) of Oklahoma drives to the basket against Iowa State during the quarterfinals of the Big 12 Basketball Tournament in Kansas City, Missouri on March 10, 2016.
Ed Zurga—Getty Images
By Sean Gregory

Hello again, college basketball. It’s time to take a little break from watching Stephen Curry — though did you see his latest magic the other night? — and instead, obsess over the Fairleigh Dickinsons of the world while filling out tournament brackets, aka your $10 donation to Derek from accounting’s slush fund. (How does Derek win the office pool every year?) While scribbling your selections, here are five teams/players/silly hunches to consider:

All Hall The last time a Big East team won a surprise conference tournament, and was led by a talented New York City point guard, Kemba Walker guided UConn to the 2011 national championship. Can Seton Hall’s Isaiah Whitehead write a similar script? Whitehead, a sophomore from Brooklyn — Walker hailed from the Bronx — took over the Big East final, scoring 26 points in Seton Hall’s dramatic 69-67 win over Villanova. Not that the committee was all that impressed: it shipped Whitehead and the Pirates to Denver, as a No. 6 seed, to play No. 11 Gonzaga on Thursday.

Best Buddy LSU’s Ben Simmons, whose team won’t be playing in the postseason, earned the comparisons to LeBron James. Magic Johnson, for example, went there. But the most fun, electrifying player in college basketball this season, without question, is Buddy Hield of Oklahoma. The Sooners earned a No. 2 seed in the tournament: they face No. 15 CSU-Bakersfield on Friday. Hield’s a pure scorer who has no problem getting his shot off: the senior finished second in the nation in scoring, with 25.0 points per game, and has shot an impressive 46% from three point range. That’s nearly a 30% increase over last year’s mark. There’s even better news for Hield fans: the West, Oklahoma’s region, is home to the weakest field in the tournament. A star like Hield would light up the Final Four in Houston.

Sweet Sixteen? Annually, the tournament selection committee does something illogical. (Tulsa? Really? You left out a charming mid-major — like Monmouth, or Valparaiso, or St. Mary’s — for Tulsa?) But the committee deserves credit for consistently doing one thing correctly: giving the worst teams in the tournament the 16th seed they deserve. Since the tournament expanded to 64 teams in 1985 — there are now 68 teams — the No. 1 seeds have a 124-0 record in first round play against the No. 16s. So you probably shouldn’t get all courageous and pick a No. 16 — No. 1 upset.Is there any hope for a No. 16 this year? Well, here’s something: Holy Cross, which entered the Patriot League tournament with an ugly 10-19 record before winning four straight road games to win the title, is coached by Bill Carmody, who was an assistant on the No. 16 Princeton team that nearly knocked off Georgetown in 1989. If anything, Carmody’s familiar with giant-slayer game plan (though the Crusaders must first beat Southern in a play-in game for a shot at No. 1 Oregon on Friday).Hey, we know that’s a stretch. But if you’re a fan of No. 16 seeds, you hold onto any kernel of hope. No matter how small.

Like A Glove. Oregon State, a 7-seed which plays No. 10 VCU on Friday, hasn’t reached the NCAA tournament since Bush 41. But thanks in large part to Gary Payton II, the Beavers are dancing for the first time in 26 years. Back in 1990, when Oregon State made its last tournament appearance, Payton’s Hall of Fame dad, Gary Sr., was conference player of the year for the Beavers and SI’s pick for national player of the year. While the son, who leads Oregon State in points (15.9), rebounds (7.9), and assists (5.1) per game, isn’t as gifted as his father on offense, Payton II defends like dad: he was sixth in the nation in steals. His rebounding stats are stellar for a guard. Thanks to his defense, Payton Sr. was nicknamed “the Glove.” (He always covered someone). While Payton II was in junior college in Salt Lake City, local media dubbed him “the Mitten,” a name he hated. Payton II shed the mitten for good this season.

Super Steve. What team enters the NCAA tournament with the longest active winning streak in Division 1 college basketball? Only hard-core hoopheads know this answer: the Stephen F. Austin Lumberjacks, who play in the Southland Conference, and have won 20 straight games. The Jacks stonewall opponents with their full-court press: almost one in four possessions against Stephen F. Austin end in a turnover, the highest rate in the country. Stephen F. Austin hasn’t lost a game in 2016: No. 3 West Virginia, from the powerful Big 12 conference, will look to change that on Friday.

Stephen F. Austin to the Sweet 16? It’s March. Such surprises are inevitable. Just pick the right ones. Good luck. Down with Derek. 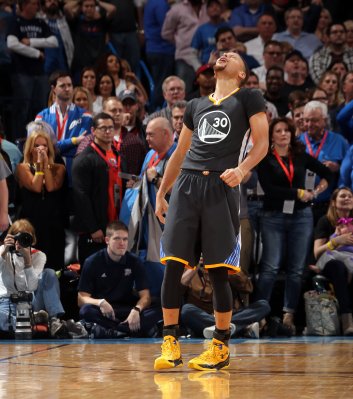 Stephen Curry Is the Antidote to America's Anger Problem
Next Up: Editor's Pick