Thousands of Spaniards March in Support of Bullfighting

Pro-bullfighting supporters wave flags adorned with bull image as they demonstrate during the Fallas Festival in Valencia on March 13, 2016
Jose Jordan—AFP/Getty Images
By Mark Rivett-Carnac

A large procession of bullfighting supporters marched through the Spanish city of Valencia on Sunday, protesting local authorities bans to the controversial spectacle.

Demonstrators see efforts to rid Spain of bullfighting as an affront to tradition and cultural expression, the Guardian reports. They were joined by several famous matadors, including Enrique Ponce, Julián López Escobar and José Antonio Morante Camacho.

“The bullfighting world is aware of the problem and maltreatment we are suffering at the hands of a part of the political class,” Morante said, according to the Guardian.

However, many other Spaniards view the sport as inhumane and rebuke its grotesque treatment of animals. Local authorities in some cities, including Madrid and Valencia, have cut subsidies to bullfighting, while the region of Catalonia banned the sport outright about six years ago. 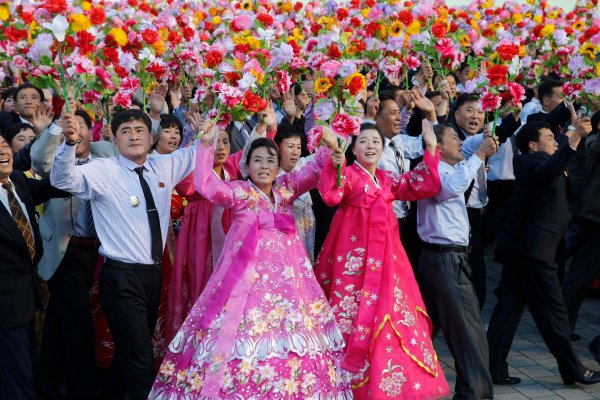 North Koreans Must Work 70 Days Straight
Next Up: Editor's Pick