Why This Recent Piece of ISIS Intelligence Stands Out

Two bonanzas surfaced in the war against the Islamic State of Iraq and Greater Syria (ISIS) last week, although placing them in proper perspective proved daunting. You wouldn’t have gleaned any insight at Friday’s Pentagon press briefing, where Baghdad-based Army Colonel Steve Warren handled multiple questions via video conference about ISIS’s chemical weapons. But he didn’t get a single one on the list of 22,000 ISIS members that fell into the hands of the anti-ISIS coalition led by the U.S.

The revelation that U.S. commandos snared ISIS’s chemical-weapons chief was important, but it pales alongside the flash drive containing a roster of ISIS agents a disgruntled militant handed over to Britain’s Sky News. Other news organizations in Europe received similar data, and U.S. officials say it’s already being shared with Western intelligence agencies. Each episode, in its own way, suggests progress in the 20-month U.S.-lead war on the the group.

The capture of Iraqi Sleiman Daoud al-Afari transformed him into the 21st century’s version of “Chemical Ali.” The original was a Saddam Hussein general who earned the moniker for killing thousands of Kurds with mustard gas, sarin, tabun and VX in the 1980s and 1990s (the original “Chemical Ali,” Ali Hassan Abd al-Majid al-Tikriti, was hanged in 2010). Afari’s seizure by U.S. Army Delta Force commandos has led to air strikes on a pair of alleged mustard-gas stockpiles he purportedly identified near Mosul, Iraq’s second-largest city, and one that ISIS has held for nearly two years. Both Iraq and Syria have had mustard gas in their arsenals in the past.

U.S. forces feared such chemical weapons during the 2003 invasion of Iraq, and trained in heavy and cumbersome suits to limit their exposure. But the only U.S. casualties resulting from Iraq’s chemical weapons happened when U.S. troops stumbled upon abandoned stockpiles. Mustard gas, while potent, killed only 5% of the troops exposed to it during World War I.

In fact chemical weapons, despite their horror (a reported Saturday attack near the northern Iraq city of Kirkuk killed a 3-year-old girl and wounded 600), make lousy weapons of war. Logistically, they’re difficult to transport and deploy, and an unexpected wind can render them impotent, or even dangerous to the attacker using them. “It’s not a high threat. We’re not, frankly, losing too much sleep over it,” Warren said Friday. “It’s a fairly relatively ineffective as a weapon, though, because it’s very non-persistent, so you drop it, it goes up, disappears.”

The good news associated with Afari’s capture was that it was carried out by what the Pentagon calls its “Expeditionary Targeting Force,” a pair of 50-man special-ops units dispatched to the region in December with the express mission of killing or capturing ISIS leaders (the bad news was that it took the Pentagon 17 months after the war on ISIS began to send it into action).

But the more important revelation was the flash drive naming up to 22,000 ISIS members from 51 nations, complete with their answers to 23 survey questions (including blood type, date and place of birth, mother’s maiden name, knowledge of sharia and experience). The list goes a long way to ripping the mask off of foreign ISIS fighters who had hope to return home to carry out terror attacks.

Sky News’ source reportedly stole the flash drive from the leader of ISIS’s internal police. That source, who calls himself “Abu Hamed,” is reportedly a one-time Free Syrian Army fighter who bolted to the Islamic State. But he became embittered, saying that ISIS’s original Islamic goals have been pushed aside by former Baath Party troops who once fought for Saddam Hussein.

His theft—German officials have said they believe the roster is authentic—signals that months of air strikes are helping to grind ISIS down and leading to fissures within its ranks. While the list dates from 2013—and some of its names are already known to the U.S. and other nations fighting ISIS—the betrayal it represents is of far more consequence than any particulars, or the capture of any chemical agent. 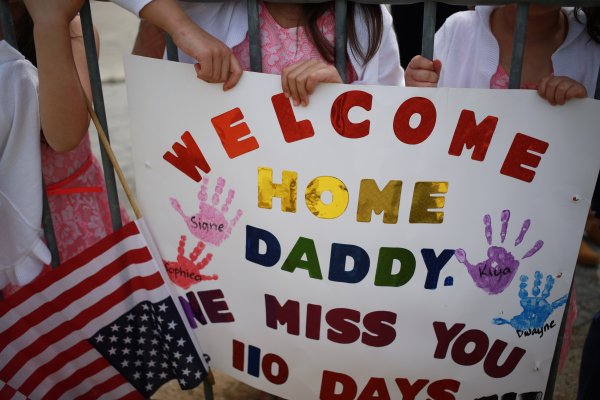 Here's Why the U.S. Military Is a Family Business
Next Up: Editor's Pick