Trump May Pay Legal Fees of Man Who Sucker-Punched Protester

Donald Trump on Sunday said he was “looking into” paying the legal fees for the man who sucker-punched a protester during a campaign rally in North Carolina.

The Republican presidential front-runner addressed a violent incident that took place Wednesday at a rally in Fayetteville, N.C. during his appearance Sunday on Meet the Press. John McGraw, a 78-year-old Trump supporter, was charged with assault and disorderly conduct after multiple videos surfaced showing him punching a protester in the face, authorities said.

Trump said the man “got carried away” with his actions before saying he doesn’t condone violence. “He obviously loves his country, and maybe he doesn’t like seeing what’s happening to the country,” Trump told the show’s host, Chuck Todd. When asked if the billionaire businessman would pay the man’s legal fees if he could, Trump said: “I’ve actually instructed my people to look into it, yes.”

McGraw defended his actions, telling Inside Edition that he enjoyed punching 26-year-old Rakeem Jones and that the protester “deserved it.” “You bet I liked it. Knocking the hell out of that big mouth,” McGraw said. “The next time we see him, we might have to kill him. We don’t know who he is. He might be with a terrorist organization.”

Democratic presidential candidate Bernie Sanders on Sunday slammed Trump for appearing to condone violence by paying the legal fees of a supporter who “viciously attacked” a protester. “Trump should tone down his rhetoric and condemn the violence of some of his supporters,” he wrote on Twitter.

Trump also discussed the moment another protester appeared to attempt to storm the stage Saturday at his campaign rally outside of Dayton, Ohio. The real estate mogul had falsely claimed the man who rushed the stage was connected to ISIS. “He has ties to ISIS. Should be in jail!” Trump wrote on Twitter after the incident.

He appeared to backtrack when Todd told him the video he posted on Twitter was a hoax. “What do I know about it? All I know is what’s on the Internet,” Trump said. 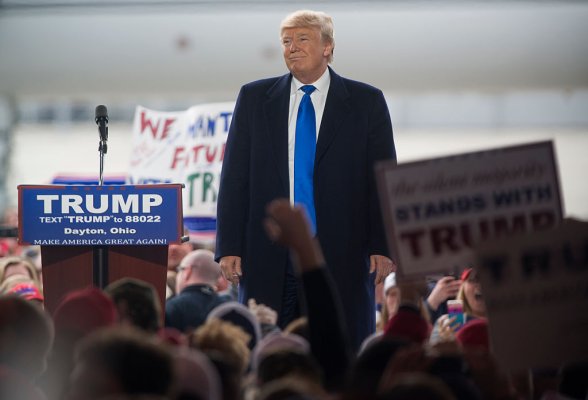 Poll: Donald Trump Leads Republicans in Florida and Illinois
Next Up: Editor's Pick