Donald Trump, the White House hopeful whose campaign stops have in recent weeks been marred by violence, on Friday abruptly canceled a campaign rally in Chicago that had already grown rowdy before he even arrived.

Before Trump arrived at the venue, protesters were clearly ready for the event at the University of Illinois at Chicago arena. Some of the activists were from the Black Lives Matter movement, which has been showing up increasingly at Trump events in cities. Others wearing “Muslims United Against Trump” were ejected, according to tweets sent from the site. Video from inside the venue broadcast on national TV showed numerous fights breaking out between Trump supporters and protesters, and video from outside the event showed growing crowds. The evening had all the makings of a bad mix of political enthusiasm, civil rights activism and high emotions.

Trump’s recent campaign rallies have been marred by violence. But Friday night’s session was a first: The threat of violence kept Trump away entirely.

“Mr. Trump just arrived in Chicago and after meeting with law enforcement has determined that for the safety of all of the tens of thousands of people that have gathered in and around the arena, tonight’s rally will be postponed to another date,” Trump’s campaign said in a statement. “Thank you very much for your attendance and please go in peace.”

Trump was scheduled to return to the campaign trail on Saturday, with an event scheduled in Cleveland. 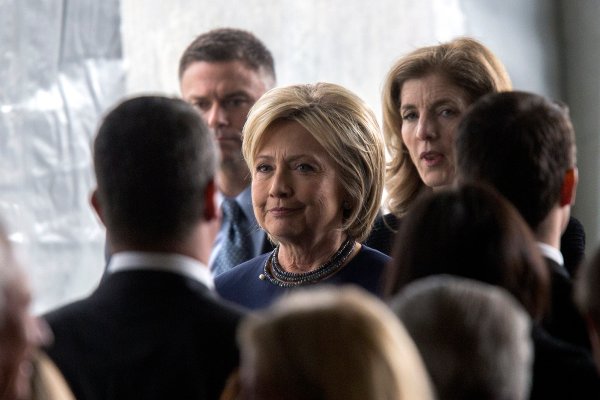 Clinton Walks Back Praise of Reagan's AIDS Response
Next Up: Editor's Pick