Why the U.S.-U.K. Relationship Is Less Special than Ever

Almost 70 years to the day since Winston Churchill immortalized the term in his historic ‘Sinews of Peace’ address, the “special relationship” between the U.K. and U.S. is looking strained once again.

President Barack Obama threw the diplomatic equivalent of shade at British Prime Minister David Cameron in an interview in The Atlantic published this week. In his conversation with Jeffrey Goldberg, Obama laid the blame for the collapse of Libya in the aftermath of dictator Muammar Gaddafi’s downfall primarily at Europe’s door, saying he had expected his allies to do more to stabilize the situation. Cameron, he said, was “distracted by a range of other things.”

The White House hastily put out a statement pronouncing the U.S-U.K. relationship just as special as it had ever been, but the damage was done. The British chattering classes wailed and gnashed their teeth, as they are wont to do whenever the transatlantic bond is called into question.

In truth, the concept of the “special relationship” is axiomatic only in Britain, where it has long propped up the country’s self-identity as one of the world’s great powers, well after the sun had set on its empire. In the U.S., the phrase has been in question in since at least 1970, when TIME said it “does not come even close to carrying the significance that it did in 1946.” In the scathing words of one interviewee in an article marking then-U.K. Prime Minister Harold Wilson’s visit to Washington, Britain by then had become a “butterfly content to flutter pathetically on the periphery of the world.”

Of course any chaos theoretician worth her salt could tell you that a butterfly flapping its wings in one part of the world can still cause rain to fall in another. Which is another way of saying that, even as a diminished power, Britain has been a useful partner to the U.S. when it comes to raining bombs on the enemies of the West. Whenever the world’s sheriff needs a deputy, the British armed forces are usually first to answer the call.

But when the world’s sheriff wants to talk business, it calls the Germans —and then only when it’s not hanging out with its new friends in the Asia-Pacific region. In fact, the U.S. has been building special relationships all around the world under Obama, from the Middle East to the Americas.

And so, with the oxygen of power becoming ever thinner, the Brits have become increasingly hypersensitive to any perceived snub from the New World. Not long after Obama took office, his then-Press Secretary Robert Gates sparked an outbreak of grumbling by referring to the “special partnership” between the countries — making the U.S.-U.K relationship sound less like an unshakeable diplomatic union than a marketing tie-in. Obama’s level of commitment to the U.K. has been an open question ever since.

This latest affront would seem to provide an answer, of sorts. But it’s worth remembering that the term has become shorthand not for the relationship between the countries themselves, but for the kinship shared by their leaders. It may not be a surprise then that Obama would not feel a great connection with Cameron, a son of Etonian privilege whose ideas about government and the economy are significantly more conservative than the American President’s. And it’s become clear, more than seven years into his time in office, that Obama rarely feels the need to build personal relationships with foreign leaders at all—his new bro Justin Trudeau notwithstanding.

The special relationship may then flourish again under future leaders. It’s not too much of a stretch, for example, to imagine that a President Donald Trump would find a kindred spirit in another large-haired, verbose former television star — London Mayor Boris Johnson, who is currently favored to be Cameron’s successor. 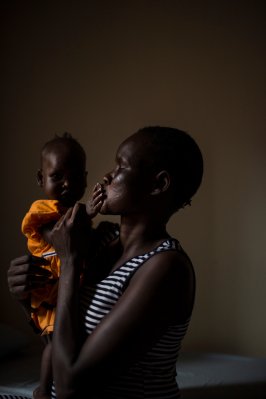 U.N. Report: Rape Used as Weapon in South Sudan
Next Up: Editor's Pick