Mary, 27, holds her six-month old daughter, Nyakwat, who was born after Mary was raped repeatedly at a U.N. camp in South Sudan by different men. She now lives in a safe house in Uganda, Dec. 8, 2015.Mary, a member of the Nuer tribe, watched as her husband and her two sons were killed in front of her by soldiers of the Dinka tribe. Five of them held her down as three others raped her 10-year-old daughter who died hours later.The soldiers, who also raped Mary, told her that they considered the Nuers in the camps to be rebels, and that they killed her sons because they couldn’t risk letting them grow up to be fighters.Mary made her way to a U.N. camp for civilians displaced by war where she lived for a year and was raped by soldiers who made their way into the camp.
Lynsey Addario—Getty Images Reportage for TIME
By Aryn Baker/Cape Town

A new report released by the United Nations on the war in South Sudan may make for horrible reading in most of the world, but for women like Mary, a South Sudanese refugee whom I interviewed for an international cover story on how rape is used as a weapon of war this week, such abuses had become so routine that she likened herself to the biblical figure of Job. Early on in our first interview she told me about how she watched one young man in her village go crazy after armed men forced him at gunpoint to carve a hunk of flesh off a corpse and eat it. That was just after she told me how her husband and son were shot in front of her, because they were members of the wrong tribe. And right before she started telling me about how her daughter was raped to death in front of her.

The UN report, which describes South Sudan as “one of the most horrendous human rights situations in the world,” is unflinching in its details, especially when it comes to how rape is being used as both a weapon, and even more obscenely, as a form of pay: “Credible sources indicate groups allied to the government are being allowed to rape women in lieu of wages,” says the report, which was written by a UN assessment team that visited South Sudan between October and January.

The team noted that opposition forces and criminal gangs had also preyed on women and girls, but that “state actors” bore the most responsibility. Rape, the report says, “has become an acceptable practice by [government] soldiers and affiliated armed militias.” The report, in all its harrowing detail, describes abuses that could amount to war crimes and crimes against humanity. If such a war crimes trial does happen, it’s not likely to help today’s victims. But it could ensure that the abuses don’t keep happening. 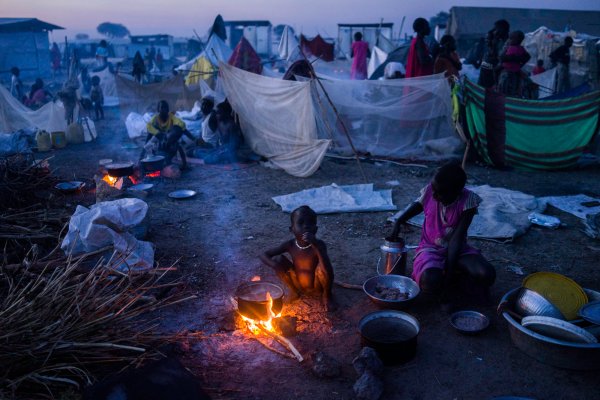 Eyewitness to Hope and Hell in South Sudan
Next Up: Editor's Pick