Here's What NASA Needs If We're Really Going to Mars

Are we there yet? Not even close.
Universal History Archive; UIG via Getty Images
Ideas
By Jeffrey Kluger
Jeffrey Kluger is Editor at Large for TIME magazine and the author of ten books, including Apollo 13, Apollo 8 and two novels for young adults. He has written more than 40 cover stories for TIME on topics ranging from space to human behavior to climate to medicine. Along with others at TIME, Kluger is an Emmy nominee for the web series A Year in Space.

There have been a lot of high-fives and popped corks in Houston in the past 10 days, as astronaut Scott Kelly ended his record-setting year in space and came home whole, happy, and apparently quite well. The folks at NASA—to say nothing of Kelly himself—deserve their moment to celebrate a mission that should provide a lot of valuable information on whether the human body can withstand an even longer trip to Mars.

So…moment over? Good. Now put away the bubbly, because the rest of the Mars plan is a mess.

For the better part of thirty years, official Washington has been promising that a crewed mission to Mars was firmly, definitely, absolutely on the way—some day. The first President Bush called for bootprints in the Martian soil by 2019. The second President Bush promised a return to the moon by 2015 and a trip to Mars at an undefined date after. President Obama points to 2030—or, more vaguely, to sometime in the 2030s—as his target date.

On this one issue at least, three very different presidents have been in remarkable agreement: yep, we’re going to Mars—on the next guy’s watch.

It’s easy to overstate the commitment and institutional resolve it took in the 1960s to put a man on the moon before the end of the decade, but this is one of the rare historical instances in which the closer you look at the record, the better it gets. The nation had a fixed deadline: before midnight on December 31, 1969—a Wednesday, in case anyone needed even more exactitude. It built the rocket that was needed, (the Saturn V), the spacecraft that were needed (the Apollo orbiter and the lunar lander), and spent the money that was needed ($24 billion over the course of the entire lunar program, the equivalent of $156 billion today).

Science and engineering are binary that way; there’s no splitting the difference, no spinning the results. Want to go to Mars? Then do the work it’ll take to get you there. Here—in no particular order—is what that work will involve:

Stop the bad ideas: The Obama Administration has spent seven years talking a good Mars game, but it’s kept NASA distracted by ordering it to focus first on the Asteroid Redirect Mission (ARM), a plan that—not to put too fine a point on it—does not make a shred of sense, never has and never will. The idea is to make a crewed landing on an asteroid as a sort of dress rehearsal for Mars, never mind that the two destinations are radically different bodies that would necessitate radically different mission profiles. The asteroid belt is actually farther away than Mars is, but that’s OK, because we’ll send a robot ship out to snag a small asteroid—one plan calls for putting it in a giant bag—and tow it back to the vicinity of the moon where we can visit it at our leisure. Really.

ARM may have passed the laugh test—barely—but it has failed at every other turn to justify why it shouldn’t be dumped on the scrap heap of Very Bad Ideas That Sound Like They Were Dreamed Up at 2 AM in Somebody’s Dorm Room. That, at last, appears to be where it’s heading. On March 8, NASA and the White House announced that the 2025 target date for the ARM mission has slipped by at least a year, which is widely being seen as the first step in the slow kabuki process of junking the plan altogether. Bet on the current President talking about ARM less and less in the year he has left, and the next President—from either party—summarily canceling it.

Build the machines: Want to see the coolest rocket ship that has never existed and at this rate never will? Go to NASA’s Space Launch System (SLS) site and have a look. The prosaically named SLS is supposed to be the 21st century version of the great Saturn V and if the artist’s renderings and computer animations on the site are any indication, it’s a honey of a machine. But you can’t fly to Mars on an artist’s rendering.

SLS has been in development in one form or another since 2004, and the anticipated date for a crewed launch has gotten pushed back again and again, with 2023 as the current projection. Something similar is true of the Orion crew vehicle—the 21st century’s Apollo—which has been limping along at the same go-slow pace as SLS. The Saturn V went from blueprint to moon in just eight years—from 1961 to 1969—and by the time the rocket was retired in 1973, eleven of them had successfully flown. But SLS and Orion have a problem Saturn and Apollo didn’t: funding.

Pony up: If science and engineering are binary, so are economics, and the fact is, you can’t build spacecraft on the cheap. The budget deal the White House and Congress recently struck includes a $19.3 billion outlay for NASA in fiscal 2016. That counts as a raise, which is nice, and it sounds like a lot—which it isn’t. The high water mark for NASA funding occurred in 1967, when the agency was allocated $5.9 billion ($41.8 billion in today’s money). That represented 4.41% of the federal budget at the time. NASA’s current budget represents a tiny 0.52% of the entire federal pie. This doesn’t mean SLS and Orion aren’t getting built. They are—but only a little bit at a time, with every small step forward followed by long delays, while NASA waits for the next cash infusion. That won’t get you to Mars but it might, someday, get your great-grandchildren there.

Stick to the plan: Say this for the ugly, fractious politics of the 1960s: when it came to the moon, everyone was pretty much in accord. It was President Eisenhower who created NASA, and it was Presidents Kennedy, Johnson and Nixon who presided over the growth of the Agency and its steady march to the moon. If that seems like an admirable kind of bipartisan constancy, consider that the same 15 year period also spanned the 85th, 86th, 87th, 88th, 89th, 90th, 91st and 92nd Congresses—and all of them stayed the lunar course. Imagine the Capitol Hill of the present day managing that kind of focus. You can’t, right? That’s the problem.

More Scott Kellys: This one NASA has well in hand. Current plans call for the space station to remain in service until 2025, and with 16 international partners involved in the project, this is not the kind of deal on which Washington can renege. NASA plans to make good use of that time, flying as many as ten more one-year astronauts to learn not just how a fifty-something male like Kelly responds to long-term stays in zero-g, but also how older astronauts, younger astronauts and women do. It’s important too to determine if first- or second-timers in space react differently from a veteran like Kelly, who has four missions to his credit.

Going to Mars, ultimately, will be a simple matter of choosing to go to Mars—of doing whatever it takes to get there. We made that choice when we went to the moon; Mars, despite all our talk, will remain forever out of reach until we make it again. 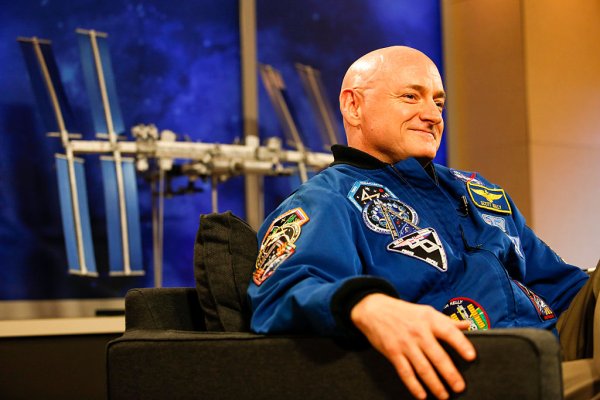