Why Republicans Pulled Their Punches at the Debate

The stage seemed set for a slugfest. But five days before voters can all but deliver the GOP nomination to Donald Trump, his Republican rivals largely passed up the chance to aggressively confront the frontrunner at what may prove to be the final Republican debate of 2016.

The tussle Thursday night in Miami was heavy on policy and light on the kind of fireworks that might have been expected as Trump’s rivals mount a last-ditch effort to keep him from winning the nomination outright. Even Trump, uncharacteristically subdued, noted how civil things were.

But everyone on the stage had a strategic reason to keep things low-key.

Read More: Transcript of the Twelfth Republican Debate in Miami

For Trump, the appeal was obvious. After a series of nasty skirmishes laced with personal attacks, he enjoyed a drama-free debate that is unlikely to shake up a race he leads comfortably. Instead of defending himself against desperate attacks or belittling his rivals, he offered an olive branch to the Republican Establishment that fears him.

From the opening bell Thursday night, Trump called upon the party to unite around his candidacy, casting himself as the leader of a movement that is bringing new voters into the fold. “I think, frankly, the Republican Establishment, or whatever you want to call it, should embrace what’s happening,” Trump said during his opening statement. At the end of deliberately muted performance, he closed with the same case.

Read More: Trump Brushes Off the Prospect of a Contested Convention

His rivals had their own reasons for pulling their punches. Marco Rubio’s restrained performance had its roots in regret. At recent Republican debates, the Florida Senator flung full briefing books crammed with opposition research at Trump, followed by petty broadsides and interruptions. But the tactic boomeranged, hurting his poll numbers and damaging a carefully cultivated reputation. By Wednesday, Rubio was saying he regretted resorting to personal insults.

And so five days before a pivotal winner-take-all primary in his home state, Rubio passed up a series of chances to confront Trump in what could be the final debate of his candidacy.

“There was real differences on the stage tonight between Trump and Rubio but it was over policies, not personalities, and that has always been our strength,” said Rubio spokesman Alex Conant said, in a tacit admission that the exchanges over the last two weeks have hurt more than they’ve helped.

Texas Sen. Ted Cruz’s challenge on Thursday was less urgent. Unlike Rubio and Ohio Gov. John Kasich, he has already survived a fatal threat on his home turf. Cruz’s immediate goal is to let Trump winnow the field by winning Florida on March 15 and pushing Rubio from the race. That would leave the Texan, who sits second in delegates, in a one-on-one fight with Trump for the nomination. That’s a contest Cruz’s campaign thinks it can win despite the deficit in delegates. “There are only two of us that have a path to winning the nomination, Donald and myself,” Cruz told the crowd, casting the contest as a head-to-head battle.

As a result, Cruz threw only a series of glancing blows at Trump on Thursday. He declined to condemn the spate of violence that has marked Trump’s public rallies. He offered only a mild critique of the protectionist trade policies Trump champions, which defy generations of GOP doctrine. (“He’s right about the problems,” Cruz said, before noting that “his solutions don’t work.”) And he validated the anger driving Trump’s hardline rhetoric against Islam even as he tried to delineate policy differences between them. “People are scared,” Cruz said. “For seven years, we’ve faced terrorist attacks and President Obama lectures Americans on Islamophobia. That is maddening.”

“I think it probably accents where the race is, which is a two-man race between Trump and Cruz with slogans versus solutions,” said Cruz campaign manager Jeff Roe.

For Ohio Gov. John Kasich, a subdued debate was business as usual. The Ohio Governor, who has sought to appeal to frustrated voters by floating above the intraparty bickering, he spent much of the evening outlining his record in the Buckeye State, where he hopes a victory March 15 will serve as a springboard to a comeback. One observer noted that he finally fit in: “It looked like everyone was doing their John Kasich impression,” quipped former New Hampshire Republican Sen. John Sununu.

Where the candidates and Trump did clash was on foreign policy, where Trump appeared to be living in an alternate reality, calling the peaceful Tiananmen Square protests of 1989 a “riot” and repeatedly saying he’d make strong deals without defining what that meant. Cruz and Rubio got the best of Trump in those exchanges. “Donald Trump defended the Chinese communists, the Cuban communists, the Russian communists and the Palestinian terrorists over the course of the evening, so I think that was an interesting strategic choice for him in a Republican primary and in the United State of America,” said Tim Miller, the spokesman for one of the principal anti-Trump efforts.

But it was unclear what, if any, impact such statements would have on a candidate who seems to defy the laws of gravity. And whatever momentum has gathered behind the so-called “Stop Trump” movement seemed to seep away as his rivals ducked a brawl in what could be the final major forum of the campaign. When it was over, Trump suggested to reporters backstage that it was time to stop the debates. Which would leave the last words of the season to Trump, who used them make the the case that it’s time for the party to coalesce behind his unconventional juggernaut. 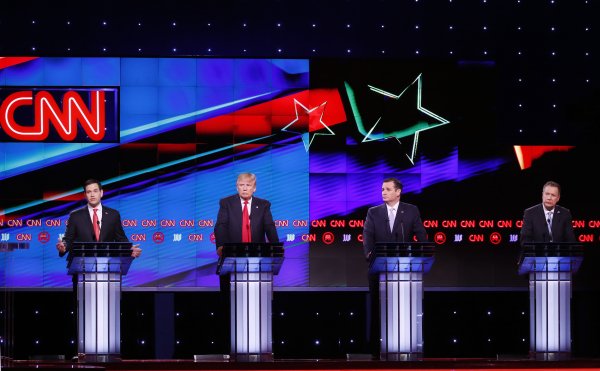 This is How Thursday's Republican Debate Played Out Online
Next Up: Editor's Pick