Donald Trump on Violence at His Rallies: Protesters Are 'Bad Dudes'

At the Republican debate Thursday night, Donald Trump was asked about the violence at his campaign rallies. Just one night before, a man was arrested for punching a protester in the face at a Trump event.

Trump said he does not think he has inspired any violent actions. “I hope not, I truly hope not,” he said.

But Trump also seemed to obliquely defend his supporters who have resorted to violence, saying that it comes from a place of anger about the state of affairs in the country and that the protesters sometimes bring it on themselves.

“We have some protesters who are bad dudes,” Trump continued. “They have done bad things. They are swinging, they are really dangerous, and they get in there and they start hitting people.”

There has not been a documented case of protester on supporter violence at Trump rallies, and Trump did not offer specific evidence for this claim. 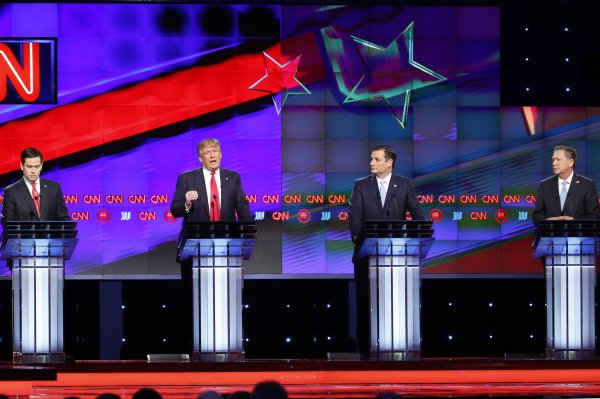 Watch Rubio Slam Trump for Saying 'Islam Hates Us'
Next Up: Editor's Pick