Review: Audra McDonald's Lady Day on HBO is a Moving Parable of Fame

On HBO Saturday night, Audra McDonald acts out a decades-old, but familiar, struggle. As Billie Holiday in Lady Day at Emerson’s Bar & Grill, she provides vivid proof that nothing is easy about being a star—a lesson our most beloved celebrities still teach us periodically when they act out.

In this, a taped version of the Broadway play for which McDonald won her record sixth Tony, the actress inhabits the role of Holiday, the once-heralded singer struggling through a gig some four months before her death. From the start, McDonald’s Holiday seems intent on reinventing herself: “I’m the new Billie now, and I don’t need flowers,” she announces, disdainfully handling a box of her trademark gardenias. But, all too clearly, she’s trapped.

McDonald, a seasoned performer known for her crystal-clear voice, goes so guttural as Billie that her between-song monologues seem at times incomprehensible. That’s kind of the point; her winding stories (we’re reminded several times, for instance, that her mother was called “The Duchess”) have no resolution but breaking into a song midphrase. Her audience supports her only in the literal sense; they hold her up as she stumbles off the stage at times, as well as lending her smokes and, for a while, holding her full-to-the-brim drink. Sure, they also laugh at her jokes and sit rapt for her songs, but they’re barely on camera or heard at all; Billie is, perversely, so deep within the mechanism of fame that the people who recognize her are no longer the point.

They’re simply mute confessors, to whom Billie can spill a lifetime of pain. Oftentimes that pain comes in the form of a tight joke: Early on, Holiday announces she’s celebrating her five-month anniversary with her accompanist: Is this really something to celebrate? How difficult must she be? And, given the degree to which he supports her—picking up any song she decides in the moment she’ll sing a few bars of, pulling up her glove to hide the needle marks—can it only be five months?

At least her accompanist knows her vaguely intimately. In the brief moments when we see the audience’s faces (as after Billie elaborately describes a story of racism that ends with her urinating on the aggressor’s feet), they are in large part white, and they all tacitly egg her on as her gig moves towards chaos. The same forces against which she’s been forced to rebel even to have a career is the one that, in this telling of what’s now the Holiday myth, gives her fame.

This story gives out, as all of Billie’s stories here do, into a song: This time, it’s “Strange Fruit,” McDonald’s most haunting interpretation of a Holiday hit. McDonald gives it her all and is aided by both the song’s familiarity and the ambition of the camera work in the moment. Suddenly, the camera zooms back from its tight close-up on McDonald’s face, revealing a clenched body intent on something more than delivering a message to her small audience. She wants to be heard.

This struggle has hardly gotten easier for stars in the years since Holiday’s death. Consider Madonna’s recent fans-only show, during which she donned a pink wig and bemoaned her ongoing custody battle, echoing in some ways the period from 2006 to 2008 during which Britney Spears was the reigning metaphor for the wages of fame. This year’s Best Documentary Oscar went to Amy, a moving film about celebrity’s particular toxicity (and a corrective to the 2014 winner, 20 Feet from Stardom, which treats recognition as a much-coveted prize to be won).

For her part, McDonald could easily win yet another prize for the role. The quirks of Emmy categorization mean that she’s likely to be up against performers from miniseries like American Crime, The People v. O.J. Simpson, and Fargo, but McDonald, in her own zone, acts out her own miniseries in an hour and a half. “I want a beautiful home, and some kids… and I want to cook,” McDonald’s Billie says in the show’s final moments.

That, by all accounts, McDonald has a completely lovely personal life only makes the pain sharper. Billie wants to cook, but she was called to perform, a calling whose rewards are often drowned out by its pains, and one that can’t hide past traumas. Who in the audience was even listening to what she wanted? By the end, they’ve (literally, in this depiction) faded away: Holiday’s tears, for her eager audience, are a part of the act—easily-ignored interstitial material between the hits. 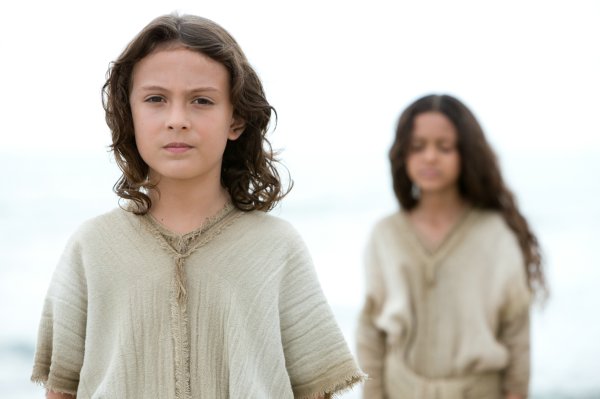 Here's Why Making The Young Messiah Was 'Fraught With Peril'
Next Up: Editor's Pick