German Chancellor and Chairwoman of the German Christian Democrats (CDU) Angela Merkel speaks to supporters at a CDU campaign rally ahead of Baden-Wuerttemberg state elections on March 10, 2016 in Aalen, Germany.
Thomas Niedermueller—Getty Images
By Simon Lewis

German Chancellor Angela Merkel has criticized other European countries for shutting the door to refugees and migrants hoping to reach Europe via the Balkan route, the BBC reports.

European Union members Austria, Slovenia and Croatia — along with non-E.U. states Serbia and Macedonia — have all taken actions to prevent people from moving across their borders. Many people fleeing wars in Syria, Afghanistan and Iraq — along with economic migrants — remain stuck in Greece as a result.

“Personally I think that Austria’s unilateral decision, and then those made subsequently by Balkan countries, will obviously bring us fewer refugees, but they put Greece in a very difficult situation,” Merkel told MDR radio in Germany on Thursday, according to the BBC.

A deal to return many migrants from Greece to Turkey, linked to resettlement of Syrian refugees in E.U. nations, is still to be finalized.

“If we do not manage to reach a deal with Turkey, then Greece cannot bear the weight for long,” Merkel said. “That’s why I am seeking a real European solution, that is, a solution for all 28 [E.U. members].” 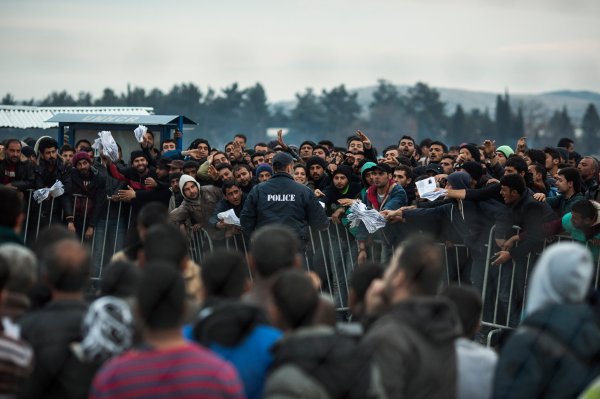 Europe Warns Economic Migrants Not to Travel
Next Up: Editor's Pick