Republican Candidates Face Off in Florida

The four remaining GOP candidates met in Florida Thursday night for their 12th debate, the final face-off before the state’s crucial primary next week.

Ninety-nine delegates are up for grabs in the Sunshine State’s winner-take-all contest on March 15, the results of which could throw another candidate by the wayside. Sen. Marco Rubio’s campaign has been struggling in recent days, and he’s long made his home state a must-win.

Donald Trump, meanwhile, is leading in overall delegate count. A win in Florida would put him that much closer to the 1,237 delegates needed to win the contest outright.

The debate began without the fireworks of the previous two contests, with a detailed discussion of trade and immigration policies. Trump, who has come under fire for using many of the same programs in business that he derides on the campaign trail, said he would best be able to change the existing laws “because nobody knows the system better than me.”

Texas Sen. Ted Cruz rejected the notion that he adjusted his position on pending trade agreements, while Rubio said he didn’t think a pause was needed to the high-skilled immigration program to ensure that laws are enforced to ensure businesses don’t replace American jobs with foreign labor.

In his opening statement, Trump noted the enthusiasm of those following the GOP race, with record turnouts nationwide. “The whole world is talking,” he said. Trump called on the GOP, and its growing anti-Trump movement, to fall in behind him.

“I think the Republican establishment, or whatever you want to call it, should embrace what’s happening,” Trump said.

Cruz is looking to knock Rubio out of the race and bring it down to a two man contest between him and Trump, while underdog Ohio Gov. John Kasich is battling to be the establishment favorite and hang on until Ohio.

There’s a lot at stake for the candidates tonight, and the arguments will likely be heated.

At the last debate, Rubio went on the attack against Trump, who responded to a campaign trail gibe about the size of his hands by alluding to the size of his private parts.

A penitent Rubio has since said he regrets the tone of his attacks on Trump.

“I’d do it differently. I really would. The reason—my kids were embarrassed by it. My wife didn’t like it. I don’t think it reflects good,” he told Fox News Wednesday. “That’s not who I am. That’s not what my campaign is going to be about or will ever be about again.”

But with his campaign on the ropes, it’s unlikely Rubio will be slinking back to his corner either. 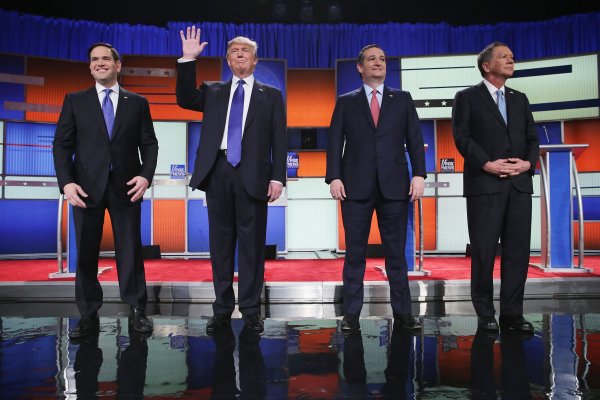