Tristan Walker didn’t know anything about Silicon Valley until he was 24 years old. Today, at age 31, he’s gone through stints at Twitter, Foursquare and Andreessen Horowitz, emerging as a leader in efforts to boost diversity in tech.

Walker’s two-year old health and beauty startup, Walker & Company Brands, is growing fast. Much of that success comes thanks to Bevel, a shaving kit geared toward men of color. The company has attracted investment from celebrities including rapper Nas and venture capital outfits like Google Ventures. The firm’s products went on sale in Target stores earlier this year. Bevel is launching a new electric trimmer this spring, while Walker has plans to unveil a new brand aimed at women later in the year.

Walker has also served as co-founder and chairman of Code 2040, a nonprofit that helps black and Latino students land jobs at tech giants like Facebook and Apple.

TIME spoke with Walker to discuss his career, the companies he thinks are serious about diversity, and the challenges facing minorities seeking investors for their ideas. The interview has been edited for length and clarity.

TIME: Tell me about your journey to this point.

Walker: [There were] two views of the world that I had that few people in Silicon Valley knew about. The first is the idea that black culture leads to all global culture. I fundamentally do believe that: food, music, dance, etc. My biggest frustration was living in Silicon Valley, the earliest-adopting region on Earth, and its knowing very little about the earliest-adopting culture on Earth. That chasm is crazy to me. For a lot of the most popular technology companies out there, I argue that the reason they’re so popular is because it’s built on the back of this culture.

The second view of the world that I had, and this is more personal to me, is that all health and beauty companies are doomed. [Black people are] always having to be relegated to the second-class citizen experience at retail when we spend more money on that stuff than anyone else. We’re the most culturally influential demographic on the planet. If you look at Latino, Asian consumers, we’re the majority of the world, [but] people still talk about us like we’re a niche consumer . . . In 20 years, we’ll be the majority of this country.

I go to this store—a shaving store—and every time I walk in that store, I ask the sales rep, ‘I’m a black man, I’ve had to deal with these issues. What would you recommend?’ They have every incentive in the world to take me to their $300 multi-blade razors that they sell with the nice handle and all that jazz. They’ve always taken me to off-brand, single-blade, double-edged safety razors. Why is that the case? That discord and that tension, I was like, “now here’s a business.”

Why is Bevel’s main business a subscription service?

Shaving just lends itself to that model. Why do you have to think about going to retail however often to re-up? One thing we care most about is customer satisfaction, and that means convenience. It’s a model that folks are used to, if you think about some of the most iconic folks like Proactiv.

Most important, I think there’s an efficacy in it too. A lot of our customers are shaving either for the first time ever or the second time ever because they’ve been dealt a false bill of goods in the past and they’ve written off razors forever. So we have a full system. For ideal results, you want to use the razor with the priming oil with the shave cream with the restoring balm with the brush. We wanted to show folks the importance of using them all, especially if they’re using it for the first time. We also tout our product education experience, and that’s a very important part for the kind of consumer we’re serving.

You have gotten a lot of venture funding from firms that mostly focus on tech products. How were you able to secure this funding as a health products company rather than a tech company?

I’m also wondering more generally about the challenges for people of color, especially black people, getting funding in Silicon Valley. Can you talk about how you navigated that and how many challenges still remain for people who are not from that world?

I think a lot of venture capitalists let their lack of context cloud their judgment. I always illuminate that through this specific example that came through my first pitch ever. It was with this woman I really respected. I had a slide that talked about Proactiv, and our system is fairly analogous to it. It solves an acute health and beauty problem people have had. She looked at me and said, “Tristan, I’m not sure issues related to razor bumps have as big a societal impact as solving issues related to acne.”

I’m like, I get it but I don’t. All you had to do was get on the phone with 10 black men, and nine of them would have said, ‘I’ve had to deal with this my entire life.’ This is why I think folks talk about the need for more partners, the need for more folks in the industry because those folks come with the context.

Tell me a little bit about Code 2040, which you’re a founder of. What progress have you made so far?

We’ve put between 80 and 90 fellows through the program. This will be our fifth year. We just announced some funding, about $1.3 million from Intel. We have a 90-plus percent full-time offer rate. Folks are saying they can’t find this talent. We’re finding it, why can’t you?

All of our partner companies are incredibly excited and that’s why they give us the money that they do and the support that they do. We really started it because I didn’t know about Silicon Valley until I was 24. That’s crazy. I’ll be damned if I let other people make that same mistake.

When you look at the broader issue of diversity in Silicon Valley, what do you think are the actual reasons businesses don’t hire more people of color?

Some of it is laziness. There’s also potential lack of resources. I can understand why a startup might not be able to go to University of Maryland, Baltimore County. We just want to partner with them to help.

We found out that [some Code 2040 fellows] just weren’t comfortable doing white board interviews. [Companies] give you a problem, you’ve got to go to the white board, you’ve got to write the answers to the problem. So it starts to beg the question, are they not getting these jobs because they’re unqualified? Probably not. Our stats suggest otherwise. Is your interview process biased? Maybe. I can’t say yes or no, but that’s worth exploration. Is it the fact that implicit bias is actually blocking people? Most likely. We really want to partner with these [companies] and get to the heart of the issue and quantify it.

In the last couple of years most of the major tech companies have rolled out their diversity stats and announced plans for increasing their minority hires. Do you have any thoughts on if any specific company has the best strategy?

Pinterest, they’re doing really well. You can actually look at the makeup of their company and their intern classes. They’re actually investing the resources necessary to do it, so I respect what they’re doing a lot. A lot of the other folks, time will tell. To share your stats once isn’t enough. The true test of this will be five years from now.

Do you think the way people in Silicon Valley talk or think about diversity is different than five years ago?

No. I mean, it’s more public now, but they’re saying the same things. It doesn’t sound very different to me. Also, it doesn’t matter. The thing that I care about is output. You can say whatever you want. Quite frankly, because we weren’t seeing the output, that’s why Code 2040 really started. It’s one thing to say it, and it’s another thing to do it. So we did. 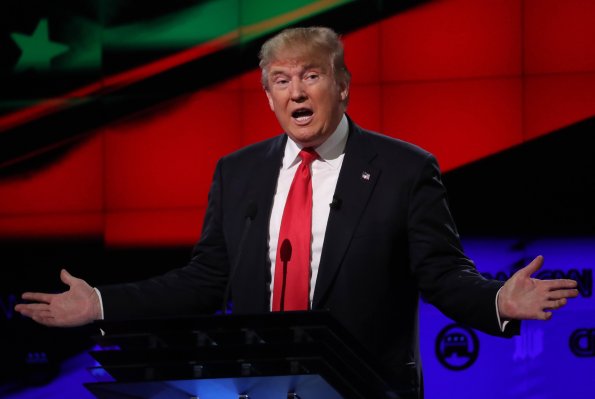 Fact-Checking Donald Trump on Free Trade
Next Up: Editor's Pick