These 5 Facts Explain the Increasingly Tense Geopolitics in Asia

South Korean army soldiers ride a K-1 tank during the annual exercise with their U.S. counterparts in Paju, near the border with North Korea, on March 10, 2016.
Ahn Young-joon—AP
By Ian Bremmer

While the geopolitics of Asia look relatively stable in 2016—especially compared to other hot spots—there’s no shortage of conflicts simmering beneath the surface. These five facts detail what you need to know about Asia’s fluid security situation:

It’s a very large ocean away, but the U.S. is still Asia’s dominant military presence. According to the Department of Defense, the U.S. currently has a total of 150,560 military personnel stationed around the world. Of those, roughly 50,000 are posted in Japan, and nearly 28,000 are based in South Korea. To put that in perspective, there are currently fewer than 10,000 Americans stationed in Afghanistan, where U.S. soldiers are still fighting and dying. Across the most volatile countries in the Middle East, there’s fewer than 45,000 U.S. military personnel. That’s less surprising when you consider that Asian markets are the destination for more than 25 percent of U.S. exports and support more than one-third of all US export-related jobs. With the Trans-Pacific Partnership trade deal on the horizon, the U.S. will have even more incentive to maintain a strong military presence in the region.

China is less than thrilled by that prospect. As its economy has soared in recent decades, so has its military spending. Over the past two decades, Beijing’s military budget has increased by double-digit percentages virtually every year. China is currently the world’s second-largest military spender (in absolute spending terms), but the U.S. still outspends China on defense by more than 4 to 1. For now, China has confined its military ambitions to its own backyard, though Beijing just announced it would build its first-ever international military base outside Asia, in Djibouti. The U.S. has 85 bases in South Korea alone.

So far, China projects military strength only to defend its territory and economic interests. It’s content to let the U.S. play policemen elsewhere in the world. But Beijing wants to be top dog in Asia. It’s gotten more aggressive in protecting its ever-growing economic interests, putting its neighbors on edge.

Read More: Japan Is a Disturbing Cautionary Tale for the U.S. and the World

Exhibit A: the South China Sea. Disputes among China, Vietnam, Malaysia, Brunei, Taiwan and the Philippines over who controls these waters have raged for more than a century. At stake is a deep reservoir of oil and natural gas, and control of one of the world’s most important trading channels. Roughly 30 percent of all maritime trade travels through the South China Sea every year.

Emboldened by its economic rise, China has gotten aggressive and begun literally building artficial islands to strengthen its legal claims. As the Pentagon reported this past summer, “China has now reclaimed 17 times more land in 20 months than the other claimants combined over the past 40 years, accounting for approximately 95 percent of all reclaimed land in the Spratly Islands,” one of the most hotly contested parts of the South China Sea. The rest of Asia fears this is a sign of things to come.

America wants to make sure things don’t spiral out of control. Aside from the $1.2 trillion worth of products destined for American markets that travel through the South China Sea each year, the U.S. fears China and its neighbors will come to blows. If war erupts in Asia, the U.S. is legally bound to defend Japan, South Korea, the Philippines and Thailand, with whom it has formal alliances. The U.S. wants to extricate itself from the Middle East; the last thing it needs is new conflicts in Asia.

To understand how much agitation China’s aggression has provoked, look to Japan. Since the end of World War II, Japan has pursued a purely defensive military strategy, outsourcing its security to Washington. But Japan doubts America’s longer term staying power in Asia, and Tokyo fears that conflicts in the South China Sea will set a dangerous precedent for its maritime disputes with China in the East China Sea. The flare-up in the East China Sea a few years ago caused Japanese shipments to China to fall 14.1 percent from a year earlier after Chinese began boycotts. Given that the annual bilateral trade between the two countries now tops $300 billion, things could get even more costly this time around.

In September, Japan’s parliament passed new laws that allow the government to use its military in international conflicts, even when Japan isn’t under direct attack. The move has not been popular with the Japanese public; Prime Minister Shinzo Abe’s approval rating fell from 51 percent to 43 percent from the time the legislation was introduced to the moment it was finally approved.

While maritime conflicts have ratcheted up tensions among major powers in Asia, the silver lining is that these disputes are relatively slow-moving. And given the many economic interests at stake in the South China Sea, it behooves the regional powers (including America) to keep relations on track. North Korea is another story.

The Democratic People’s Republic of Korea is the black box of international politics. Even traditional ally China can’t be certain what’s going on there. Beijing understands that North Korea’s belligerence keeps thousands of U.S. troops in South Korea. But to avoid regime collapse and a flood of North Korean refugees—as many as 200,000 of them—China continues to prop up Kim Jong-un. As of 2014, China provides North Korea with 90 percent of its energy, 80 percent of its consumer goods and 45 percent of its food supply.

But Kim Jong-un’s often erratic behavior makes it increasingly difficult for Beijing to continue its support. That’s why China took the highly unusual step this week of announcing it’s open to five-party talks, negotiations over the DPRK’s future that don’t include North Korean negotiators. Asia’s security landscape is shifting, and so perhaps is China’s strategy. 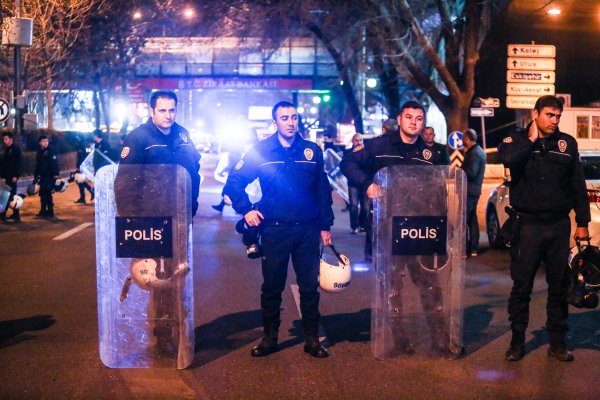 Turkish Energy Security Under Threat Amid Internal Unrest
Next Up: Editor's Pick