Ari Fleischer is familiar with the rough-and-tumble of presidential politics. A former spokesman for President George W. Bush, he’s on the board of directors for the Republican Jewish Coalition. But, like many Jewish Republican leaders, he has serious concerns about his party’s front-runner.

“As somebody who is Jewish, when you hear somebody in public life want to ban someone from entering America because of their religion, it’s unsettling,” he said. “I don’t think he’s aware of how many people who have struggled against oppression, bigotry, who come from a different background, who hear a politician say keep any one group out, and it’s not too far a leap to say, well, does he want to keep any other groups out?”

Trump has family members who are Jewish—his daughter Ivanka converted in 2009 before she got married— and he has not singled the religion out for criticism the way he has Islam. But he’s struggling among some Jewish Republicans due to his tone on issues of faith, his stance on the Israeli-Palestinian conflict and an authoritarian streak that reminds some of the fascist movements that killed their relatives in Europe.

At a rally in Florida recently, Trump asked the audience to raise their right hands and pledge that they would vote for him. Photos of the moment quickly spread on the Internet as people compared it to crowds making the Nazi salute in Germany—a comparison Trump called “ridiculous.”

To Abraham Foxman, former national director of the Anti-Defamation League, the hand gestures themselves weren’t the issue, but Trump’s request.

“To face an audience of thousands and to ask them not to raise their hand to pledge allegiance to the flag, to the Constitution, to the United States, but to pledge allegiance to him, it’s a fascist gesture,” he told TIME. “You see the way he and his people treat dissenters and protesters at his rallies. That’s very reminiscent of rallies in Europe in the ‘30s.”

Daniel Pipes, a political analyst and expert on the Middle East, went even further in his criticism, noting the way that Trump talks about being a leader.

“He’s said it about the military; they will follow him,” he said. “He never refers to Congress; Congress is a matter of no importance to him. He’s just going to get things done. This is very fascistic. It’s the temperament of a fascist.”

Trump’s complicated relationship with the American Jewish population could play a small role in Tuesday’s winner-take-all primary in Florida primary, which has the third-largest Jewish population of any state. In a December meeting with board members of the Republican Jewish Committee, Trump basically conceded that the group wouldn’t support him while leaning heavily on stereotypes of Jews as tough negotiators.

He’s also faced criticism for saying he would remain “neutral” in the Israeli-Palestinian conflict. When asked about his stance at the Republican debate in Miami Thursday, Trump doubled down. “I am pro-Israel. … but I would at least like to have the other side think I’m somewhat neutral as to them so we can get a deal done,” he said.

“Everything is a deal,” Foxman said of Trump’s position towards Israel. “That’s of concern to the Jewish community, that he won’t stand on one side or the other because it may interfere with his making a deal.”

Fleischer said he doesn’t think Trump will do well with this voting bloc in Tuesday’s Florida primary. “I think most Jewish voters are going to opt for somebody other than Trump, especially with Kasich and Rubio in the race,” he said. “And Ted Cruz is powerfully strong for Israel.”

Still, Trump has some support among Jewish Republicans. In an American Jewish Committee poll of Jewish attitudes taken in August, long before Trump’s rallies hit their current tenor, Trump polled higher than any other Republican candidate. And a poll from the Independent Democracy Institute and Tel Aviv University found that 61% of Israeli Jews believe Trump is “friendly to Israel.” A recent Times of Israel piece found Jewish Americans who support Trump gave many of the usual reasons: his independence, his business acumen, his straight talk.

(It’s worth noting that Jewish people are among the most strongly Democratic groups in the United States, with about seven-in-ten Jews identifying with or leaning toward the Democratic Party, Pew reports.)

Foxman knows that the Republican Jewish community isn’t a monolith in either supporting or disavowing Trump. “I don’t think it’s crystallized yet as a Jewish issue or an issue in the Jewish community,” he said, adding, “I think there’s a lot of shock that this is real.”

But he thinks the community will begin paying more attention to his rhetoric soon, and that it won’t sit well with a religious group that has a long history of being discriminated against.

“Here comes Donald Trump and breaks all the taboos, and it’s OK now, or it looks like it’s OK, to be racist, to be bigoted, to be misogynist, to act in a bullying manner against other people, to stereotype other people,” he said. “And I think that this phenomenon, which is a combination of Donald Trump pushing populist buttons with what’s happening in our society, is a very, very telltale scary sign for the Jewish community.” 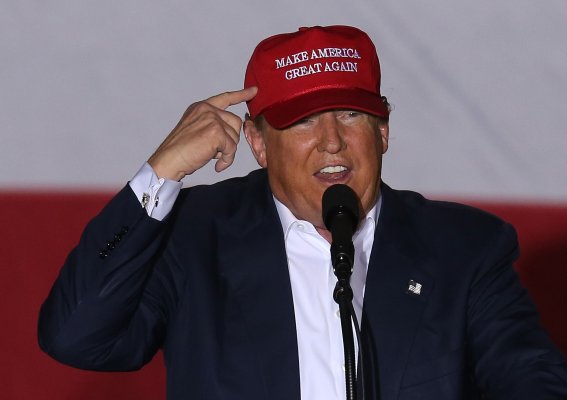 Trump Denies There Is Any Violence at His Rallies
Next Up: Editor's Pick