Ethnic minority delegates pose for pictures outside the Great Hall of the People ahead of the opening session of the National People's Congress in Beijing on March 5, 2016
Damir Sagolj—;REUTERS
By Hannah Beech / Beijing

The annual meeting of China’s National People’s Congress (NPC) isn’t known for thrilling political theater. Questions raised at the parliament’s biggest press conference, even from foreign media, are vetted beforehand. Rubber stamps are held aloft, as delegates invoke the political rubrics of the season. This year’s catchy slogans include “The China Dream, a Moderately Prosperous Society” and ‘The Four Consciousnesses.”

One of the few breaks from the political monotony comes from the colorful costuming worn by delegates representing China’s ethnic minorities, who are adorned in bright outfits and exuberant headgear: silvery headdresses, cowboy hats or even, in one case, golden antlers atop a furry cap. While more than 90% of China’s population is ethnic Han, the Chinese Communist Party also recognizes 55 ethnic minorities. The ethnic delegates may not wear these traditional outfits during their daily lives but the NPC is a time to celebrate the notion of a harmonious, multiethnic China.

At NPC sessions this week dedicated to conditions in Tibet and Xinjiang — the two largest regions in China, which make up roughly 30% of the nation’s landmass — communist officials extolled the economic development transforming China’s vast western expanses. Tibet is to welcome a second high-altitude railway that Losang Jamcan, the region’s chairman, vowed would herald “even more prosperity.” Tibetan Buddhist monks have been given free medical checkups, he announced.

Xinjiang, home to the Muslim Uighur ethnicity, has made great strides in education and poverty reduction, reported Xinjiang party chief Zhang Chunxian. “The people are in good spirits,” he said. On March 10, China’s Premier Li Keqiang joined a panel of Xinjiang delegates — and sported a peaked Uighur hat for the inevitable photo-ops. (Local media announced that news about the NPC was being delivered to eager residents in remote parts of Xinjiang via camel.)

Until the question-and-answer part of the two NPC sessions, only passing mention was made to the ethnic tensions that have riven far western China. In Tibetan parts of the country, more than 140 people have set themselves on fire since 2009 to protest government repression of Tibetan culture. In just one recent restriction, Chinese authorities have required so-called living buddhas, or tulku, to apply for official permits and register for a national database; the Dalai Lama, the exiled spiritual leader reviled by Beijing, fails to make the government’s list of holy reincarnations. The latest Tibetan self-immolation, by an 18-year-old monk, occurred on Feb. 29, just days before the NPC convened.

Violence emanating from Xinjiang is more outwardly directed. Uighurs have launched attacks on public places, such as a train station and market, slaughtering dozens of innocent passersby. Beijing considers the perpetrators part of the global cancer of Islamic extremism, pointing to Uighurs who have joined jihadist groups in other parts of Asia. In an effort to combat surging religious conservatism in Xinjiang, local officials have discouraged women from wearing headscarves and banned young men from mosques at certain times. Government officials are not allowed to fast during Ramadan or wear beards or veils. Notably, not a single female Uighur delegate has worn a headscarf during the NPC.

The top political leaders of both Tibet and Xinjiang are Han. Indeed, Tibetans and Uighurs have never held the post of regional party chief. Dazzling ethnic costumes may enliven the NPC but the message toward those who question the Communist Party’s treatment of ethnic minorities is uncompromising. While noting that incidents of “violent terrorism” declined in Xinjiang last year, regional party secretary Zhang recommended continuing a policy of “striking hard.”

Padma Choling, head of Tibet’s People’s Congress, dismissed the Dalai Lama, who is so beloved by ordinary Tibetans that even the threat of jail doesn’t prevent them from worshipping him in secret. “He betrayed our country, betrayed our people, betrayed his hometown,” said Padma, of the exiled spiritual leader. “So far, most activities he has conducted are splitting Tibet from China.” (In fact, the Dalai Lama, who escaped to India in 1959 after a failed rebellion, has for decades called for meaningful autonomy for Tibet, not outright independence.)

Simmering tensions in these two regions has catalyzed debate in Chinese academic circles about whether the nation’s ethnic policy needs to be overhauled. One faction contends that celebrating differences — like fancy ethnic dress at the NPC — could cause China to fracture as the Soviet Union did. The other group argues that allowing a certain amount of diversity only strengthens the nation. NPC delegates gathered at Beijing’s vast Great Hall of the People, however, have failed to delve into substantive debate on the issue.

Instead, at the Tibet session convened in a Tibet Hall decorated with idyllic scenes of dancing nomads and rainbow-graced mountains, senior official Padma urged foreign journalists to visit and experience China’s ethnic delights. “We haven’t closed our doors,” he said, “and we always welcome everybody, including media.” In reality, foreign journalists have been banned from visiting the region for years, apart from rare, circumscribed government tours. Indeed, throughout the month of March, which marks the anniversary of deadly ethnic violence that gripped the high plateau in 2008, all foreigners are banned from touring Tibet. Still, 20 million Chinese visited Tibet last year, eager to breathe unpolluted air and explore local Buddhist traditions. This month, the region’s first KFC opened in Lhasa, the Tibetan capital.

Meanwhile, back at the Great Hall of the People, Tibetan NPC delegates have been sporting a modern embellishment to their traditional costumes: pins with the smiling visage of President Xi, who visited the region in 2011, and other Chinese leaders. The badges are reminiscent of those emblazoned with Chairman Mao Zedong’s profile, which were popular during the personality-cult days of the Cultural Revolution. “[Under communist rule] Tibet was transformed from a slave and feudalist society, we were liberated, we got freedom, and became the host of our own house, so Tibetan people have a strong feeling for Chinese Communist Party leaders,” explained Losang Danba, the head of the municipal people’s congress in Lhasa, as to why fellow Tibetan delegates are wearing the pins. “Tibetan people are good at expressing their feelings, through singing about the party leaders, or from Mao Zedong’s times, by wearing the leaders’ badges.” Singing, dancing and badge-wearing ethnic minorities are, after all, a mainstay of modern Chinese political theater. 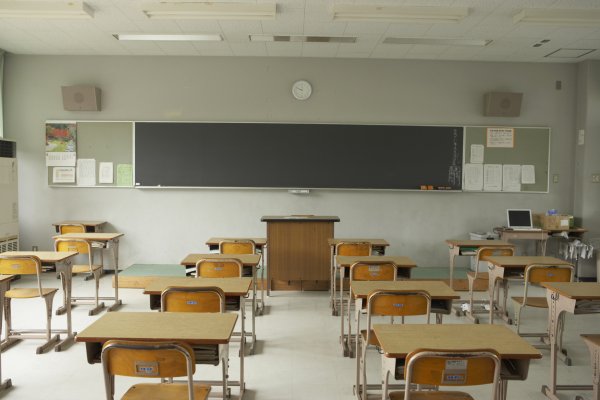 Clerical Error at Japanese School Leads to Student's Suicide
Next Up: Editor's Pick