Here's Why Making The Young Messiah Was 'Fraught With Peril'

It’s not quite a miracle, but you don’t often see a movie and its prequel playing theaters at the same time. Still, that would appear to be the case in this, the season of faith-based cinema: Risen, a nonbeliever’s-eye view of the first Easter, arrived last month. Now, hot on its sandaled heels, The Young Messiah presents an episode out of the so-called “lost years” in the life of Christ.

One hesitates to use the term “branded content” in regards a Jesus movie, but the mania for movie prequels is all about elaborating on existing popularity and name recognition—consider recent examples like Pan and Minions. But The Young Messiah is in a class by itself: Based on Anne Rice’s 2005 novel Christ the Lord: Out of Egypt, it spins an entirely new narrative, replete with Satan and miracles, within a sliver of the biblically unaccounted-for time between the Nativity stories and the 12-year-old Jesus’ visit to Jerusalem at Passover (Luke 2:41-52).

It’s also very careful not to tread on any Christian dogma: Jesus’ brother James, for instance, whose kinship to Jesus has been interpreted by theologians in various ways, is portrayed as a sibling, but is also called a cousin, and in any event is described as “adopted,” lest anyone think The Young Messiah was arguing with the doctrinal tradition of the virgin birth. Elsewhere, Satan throws an apple in the path of a running child; the 7-year-old Jesus raises him from the dead.

The Jesus tradition in motion pictures began in the silent era (most likely with Edison’s The Passion Play of Oberammergau of 1898) and most of the treatments have been done with enormous respect, both for the subject and the feelings of believers, for whom anything less than adoration can seem an incitement to riot. If this sounds like overstatement, consider Martin Scorsese’s Last Temptation of Christ, with its deeply conflicted Messiah and his dreams of sex with Mary Magdalene—when it played in Paris in 1988, the cinematheque was firebombed.

Director Cyrus Nowrasteh, who wrote the screen adaptation of The Young Messiah with his wife, Betsy, agrees that wading into the holy waters of the Jesus story was “fraught with peril.”

“But I’ve had other projects I’ve been condemned for,” he says, referring to The Stoning of Soraya M. (2008) and The Path to 9/11 (2006), both of which drew criticism for alleged misrepresentations of fact. “So I’m kind of used to that territory. Someone said to me that we were going ‘where angels fear to tread,’ but that, to me, was what was exciting about it. I felt if we do it right, people will recognize that and it will attract a lot of interest.”

That seems certain: When a movie with an even vaguely religious theme is released, the faithful flock. The Passion of the Christ, of course, created extraordinary interest when it was released in 2004. More recently, the 2013 TV miniseries The Bible earned enormous ratings. Noah—which even its distributor, Paramount, seemed to run way from—wound up doing unholy business. Son of God, a 2014 release, made $70M worldwide and Killing Jesus, last year’s critically eviscerated TV movie based on Bill O’Reilly’s book, broke NatGeo viewership records.

What The Young Messiah aims to do may have antecedents in the roots of early Christianity — for example, the Infancy Gospel of Thomas, which created its own narrative of Jesus’ life as a boy.

“It is a quite ancient text—second or third century,” says the Rev. John W. Martens, professor of theology at the University of St. Thomas. “But it exists in many manuscript traditions. It was clearly not seen as ‘historical,’ but it desired to fill in the gaps, for reasons which scholars today are still trying to ascertain—was it for entertainment? Edification? Curiosity?”

What intrigued the faithful back then may do the same today.

“People said I’d get a lot of resistance, lot of pushback, that we were going to have nothing but problems. And it hasn’t happened,” says Nowrasteh, a Christian who grew up in a secular Muslim home and has been baptized in the Presbyterian Church. “We’ve been screening across the country for religious influencers and [have] gotten a list of endorsement that would be the envy of any faith-based movie.”

It’s not as if he isn’t playing to a tough crowd: At one screening, Nowrasteh says, a viewer took exception to a scene set in Jerusalem, in which a Roman confronts the young Jesus, who is being sought by King Herod for execution; a fellow Jew covers for the child, claiming he’s mute. Jesus doesn’t say a thing.

“There are a lot of good answers for some of the questions raised in the film,” he said. “And usually they’re provided by someone else in the audience.”

Correction: The original version of this story incorrectly described the publication genre for the book Killing Jesus. 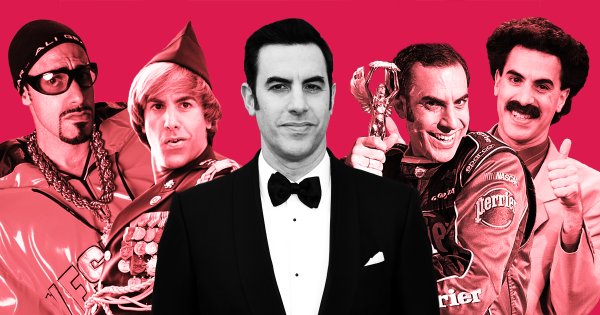 The Many Faces of Sacha Baron Cohen
Next Up: Editor's Pick