CDs Are Dying and Kanye West Is Hosting the Funeral

Next up on his wide-ranging hit list: compact discs.

“I was thinking about not making CDs ever again… Only streaming,” West tweeted March 7. “No more CDs from me.” The outspoken rapper said that his 2013 album Yeezus, which was released in a clear jewel case with no album artwork, was an “open casket” for the dying music format.

Make no mistake: Kanye is going to release more albums. He’s already hyping another project slated for this summer. And other artists will continue to release compact discs for years to come. Americans bought 125 million CDs last year, after all.

But the album’s role as the structural spine of the industry is over. This shift is fundamentally changing how music is created, distributed and interpreted.

Popular music has been beholden to technology for decades. The seven-inch vinyl records known as 45s could only hold about 4.5 minutes of music on either side, so artists like Elvis focused on short, individual songs that could stand on their own. That changed in the 1960’s, when acts like The Beatles and The Beach Boys helped make the LP—a 12-inch vinyl record that plays around 44 minutes of music—the primary mode of recorded musical expression.

The advent of CDs brought yet another change. Record labels tried to justify CDs’ higher prices by filling up as much of their available 74 minutes as possible. The extra bloat was in turn upended by the rise of MP3s, which let listeners easily buy (or steal) single songs from the comfort of their computer. In the words of Sum 41, customers were freed up to get all killer, no filler.

Through all these changes, the one constant was the nature of the monetary relationship between fan and artist. Until recently, listeners paid a certain amount of money for a certain amount of music and owned it forever. But streaming services like Spotify have changed all that. Now listeners pay for access, forking over $10 a month to effectively rent millions of songs. (Or they pay with their attention by watching or listening to ads.)

The result is that fans can now choose to utterly disregard the album as a single, creative work. YouTube, the most popular source of online music, places little emphasis on albums. On Spotify, a majority of songs are accessed by playlists — the company’s app didn’t even offer an easy way to save albums for later listening until 2014. The main pitch of Apple Music is curated playlists that pluck from a variety of different works.

“The song is the unit,” says Catherine Moore, a music business professor at New York University. “The whole concept of the album as an umbrella under which several songs fit doesn’t really matter anymore.”

Kanye’s latest release, The Life of Pablo, feels like it’s purposefully playing with listeners’ fast-shifting expectations. Kanye erratically live-tweeted the final days of the album’s development, which included multiple title changes, complete rearrangements of the tracklist and memes galore. He has said the album, currently an exclusive on streaming service Tidal, will never go on sale. A single cryptic tweet promising to fix one of the album’s songs led fans to assume a remixed version of the album will arrive—for purchase?—in the future.

Combined, these factors have led many facts to view the Tidal-released album as a kind of “beta version.” The Internet is home to plenty of fan-made reorderings of the tracklist that include alternate takes on the Pablo songs or leaked, unofficial music from the album’s recording sessions. And why not? Pablo’s existence is entirely abstract. The version floating in Tidal’s cloud could change or disappear at any moment, according to Kanye’s whims. (Hundreds of thousands of pirates will be able to hold onto the album forever, though.)

Other big artists are also finding success outside the traditional album release structure. Canadian rapper Drake released two feature-length “mixtapes” last year. But his biggest recent release was the music video for “Hotline Bling,” a song that originated on SoundCloud and hasn’t yet found its way to an album. Beyonce, the reigning queen of surprise releases, dropped a politically-charged song and video the day before the Super Bowl. But they’ve been used to promote her upcoming tour, not an LP.

Instead of album sales, these artists are vying for your attention. They want to be top of mind when listeners are deciding who to place in their Spotify playlists or which tours they want to attend this year. Releasing an album is no longer the only way — or even the best way — to do that.

“What can [artists] put in front of fans that they’re going to want to keep?” Moore asks. “‘Keep’ can mean play repeatedly and send to your friends. It doesn’t mean ‘keep’ in the sense of having something physical.”

Artists may not have much of a choice but to adapt. CD sales continued a decade-plus decline in 2015, falling more than 10%, according to Nielsen. Digital album sales, a short-term bright spot for the industry, fell about 3% in a decline that’s likely to continue. At the same time, the number of streams across platforms such as Spotify, YouTube and Google Play doubled during 2015. (That’s without counting Apple Music, which is now the second-most-popular subscription streaming service.)

These streams pay a pittance compared to albums. A mainstream artist can earn between $2 and about $3.40 for a CD sale depending on the terms of his or her contract, according to The Root. Spotify pays rights holders between $0.006 to $0.0084 per stream, with only a portion going to the artist. YouTube offers even less. It’s no surprise to see artists focusing on efforts that can help them stay consistently relevant instead of popping up every two to three years with a set of 15 carefully manicured songs.

Expect to see more experimentation as album sales continue to decline. Artists may officially release the B-sides from a prestigious album right after the fact, instead of waiting for a tenth-anniversary remaster, as Kendrick Lamar just did with the release of his untitled unmastered EP. Instead of releasing an album all at once, a band might release songs slowly over the course of a year, like the indie band White Violet is doing right now. Major artistic statements aren’t going to disappear from music, but in the world of streaming, they’ll look very different.

“The money will come,” says Moore, “but not in a predictable way.” 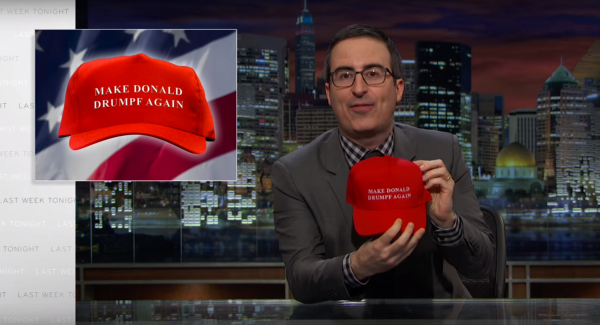 John Oliver's Donald 'Drumpf' Hats Are So Popular They Sold Out
Next Up: Editor's Pick