For months, Bernie Sanders’ top aides have been raring for what they called a “Showdown in Motown.” On Tuesday night, Democrats found out why.

The Vermont Senator won a major victory in Michigan’s primary, snatching a heavily fought-over prize from Hillary Clinton and upsetting polling and predictions. His win in the large, demographically diverse state with a big manufacturing base is crucial for the survival of his campaign, and he proved with his Tuesday night coup that he can still win a big contest despite lagging in the overall delegate count.

“I want to take this opportunity to thank the people of Michigan, who repudiated the polls that had us 25 points down a few days ago, and repudiated the pundits who said Bernie Sanders is not going anywhere,” Sanders said shortly before the Associated Press called the state for him. “What we have done is created the kind of momentum that we need to win.”

Though the victory is unlikely to change the trajectory of a Democratic race that has Clinton far ahead in pledged delegates, it gives Sanders fuel to continue onward. Coming up on the Democratic calendar are Ohio and Pennsylvania, Rust Belt states with similar demographics and temperament to the automotive state.

The loss comes as a disappointment to Clinton.

The former Secretary of State has been campaigning heavily in Michigan for weeks. Nearly two months ago, she made the water crisis in Flint a centerpiece of her campaign by raising the issue in the Democratic debate in South Carolina. She pushed the Sanders campaign to hold a subsequent debate in Flint, and flaunted her wonkiness and can-do policy expertise by bringing national attention to the beleaguered city.

Clinton aides and allies boasted about her performance in Sunday’s debate, where Sanders sometimes spoke over her and seemed stuck on the issue of gun control. “Bernie Sanders’ week has been filled with missteps, temper tantrums, wacky defenses of dangerous policy positions, and tone-deafness on issues that are deeply important to voters,” Brad Woodhouse, president of the pro-Clinton super PAC Correct the Record said in a memo.

Clinton’s efforts were not enough to carry the state. With more than 90% of precincts reporting, Sanders was ahead by a margin of 50% to Clinton’s 48%.

Polling in the state showed Clinton with as much as double-digit leads in the days before the primary, though the campaign’s internal polls had the race closer.

Sanders had a strong showing with white, working-class voters, many of whom were likely swayed to support his strong opposition to trade agreements. Michigan’s manufacturing base has been eroded and jobs have left the state, with many attributing the losses to trade deals like NAFTA, passed under President Bill Clinton’s tenure.

Perhaps more importantly, Sanders closed some of the gap among black voters, winning 30% among that demographic—significantly behind Clinton, but much better than he performed in Southern states.

Clinton sent an email to supporters shortly after the Michigan results came in, previewing some of the messaging she has prepared for a general election against Trump. “I believe our campaign and our country should be about breaking barriers and building on what made America great in the first place,” Clinton said.

Sanders will immediately begin raising money off of his victory. He raised $42 million in February, outpacing Clinton. The pro-Clinton super PAC Priorities USA Action is covering some of the shortfall by spending $4.5 million in March.

For progressives supporting Sanders, the victory breathes new life into a campaign for which some have already been preparing obituaries. And it proves that angst over trade deals, which many Americans blame for the country’s loss of manufacturing jobs, is enough to sway voters.

“The Beltway elite may never have really understood why job-killing trade deals are such a big deal,” said Dan Cantor, national director of the Working Families Party, which has endorsed Sanders. “But the people of Michigan surely do, and Bernie Sanders does too.” 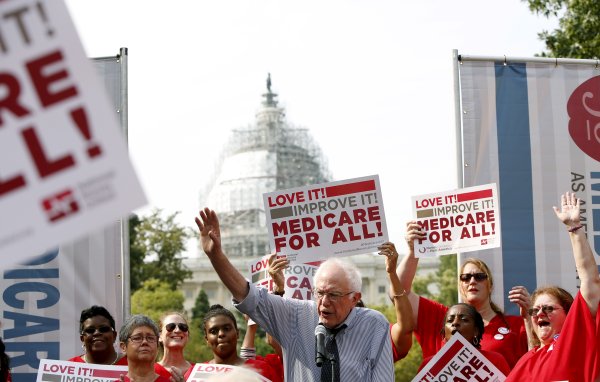