Sadly, this is a reality—even without the benefit of the apocalypse.
Ubisoft
By Matt Vella

Tom Clancy’s The Division, the massively multiplayer, online shooter released for PC, Xbox One, and Playstation 4 Mar. 8, puts a premium on realism. Ubisoft’s latest sets players loose in a near-future New York City, which has been decimated by a terrorist attack and the subsequent collapse of civil society. Though the post-apocalyptic narrative is as video-gamey as you might expect—there’s a sect of flamethrower-wielding firefighters and a seemingly endless supply of whack jobs in hoodies brandishing uzis—the scenery is remarkably true to life.

The game takes place in a meticulously rendered New York City, including many iconic locations and buildings. The streets may be littered with debris, feral dogs, and abandoned cars—but they’re shockingly accurate all told. There may be more hot dog carts than normal, but the game’s starting area in Dumbo feels like a brick-for-brick recreation. And some of the city’s biggest, some might say boondoggley, developments are even complete in this fictional future. Ubisoft’s artists nailed one other thing you will be familiar with if you life here: the mountains of trash that metastasize and disappear weekly. You can see an example above.

For more on The Division, check out TIME’s initial impressions. 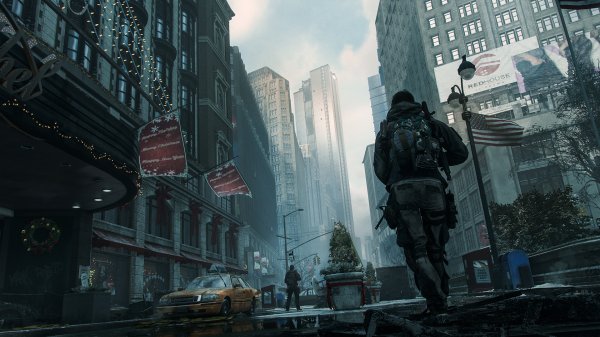 Everything I Love (and Worry About) in The Division So Far
Next Up: Editor's Pick