Meet the Conservatives Who Ran 7,000 Anti-Trump Ads in the Last Week

The empire has struck back — a conservative coalition aired nearly 7,000 advertisements in the past week attacking anti-establishment candidate Donald Trump in a last-ditch effort to prevent the real estate billionaire from winning the Republican nomination for president.

Since last Tuesday, a whopping 76 percent of all attack ads in the presidential race targeted Trump, according to a Center for Public Integrity analysis of data provided by Kantar Media/CMAG, an advertising tracking firm.

The pro-Marco Rubio Conservative Solutions PAC aired about two-thirds of these ads. Rubio is fighting for his political life having staked his campaign on winning the Florida primary, which is a week away. The last/best hope for the Republican establishment, the U.S. senator must win his home state to have any realistic chance of staying in the race.

One ad titled “Fools” accounted for more than a third of those aired by the super PAC.

“Donald Trump: puts himself first and us last,” the ad’s narrator says. The ad accuses Trump of abusing bankruptcy laws, banning homeless veterans from loitering in front of his high rise and using eminent domain laws to seize property.

The latest ad barrage arrives in the midst of the GOP frontrunner’s mounting victories in state nominating contests. If Trump wins Florida or Ohio, also hosting a primary on March 15, he will only need about 50 percent of the remaining delegates to earn the nomination.

The two states are especially critical given that they are “winner take all” in terms of delegates.

The anti-Trump ad flurry mirrors a concrete fear felt among the Republican establishment: Trump may actually win the nomination. Derailing Trump’s momentum was the main topic this weekend at a secretive American Enterprise Institute meeting attended by Republican power players, according to reporting from the Huffington Post.

Establishment Republicans are concerned about Trump’s offensive remarks regarding minorities and women, past liberal positions and probable weak showing in the general election and would prefer a more traditional candidate.

Our Principles PAC, headed by an ex-Mitt Romney campaign staffer and bankrolled by billionaire Marlene Ricketts, is one of the most prominent anti-Trump forces on the airwaves. Formed in January, the super PAC is dedicated to stopping Trump.

The super PAC aired 292 TV ads since last Tuesday. Of all of its ads, 92 percent targeted voters in Florida. Formed in January, Our Principles PAC — which can raise and spend unlimited amounts of money — has already spent more than $8 million calling for Trump’s demise, according to Federal Election Commission documents. These expenditures include direct mail, voter calls and TV ads.

“Donald Trump belongs in the 3 a.m. infomercials — not here,” says one ad’s narrator as the video cuts to a photo of the White House.

The ad by Our Principles PAC pinpoints the real estate mogul’s defunct Trump University. A series of American Future Fund TV ads do the same, but instead use former students to portray the venture as a scam.

American Future Fund and Our Principles PAC are not affiliated with a candidate.

Meanwhile, voters today went to the polls in Michigan, Mississippi, Hawaii and Idaho. 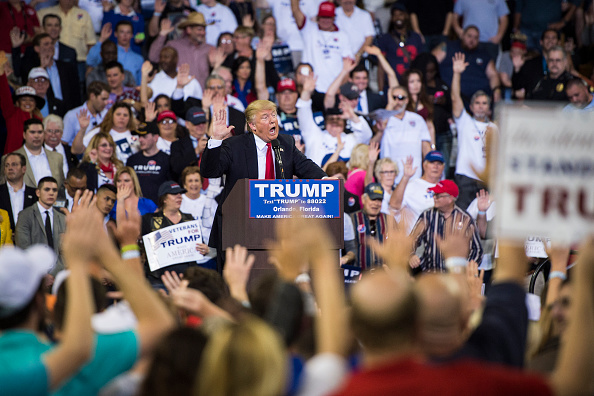