Caitlyn Jenner at a Special Screening Of "Tangerine" on Jan. 4, 2016 in Los Angeles.
Steve Granitz—WireImage/Getty Images
Ideas
By Caitlyn Jenner / Who Say

This article is part of an on-going original series written by Caitlyn Jenner for WhoSay called “The Real Me,” which explores issues and people in the LGBT community.

Sometimes life happens in the funniest ways. After my interview with Diane Sawyer aired last spring, my friend Ronda got a call from a guy she went out with many, many years ago. He told her that his child had recently transitioned and had become his daughter, Ella.

I learned a little bit about Ella’s story and invited her to one of my regular girls’ nights, so she could meet all the other women. She was just absolutely delightful—and so appreciated being a part of everything. She was like a sponge, learning as much as she could from these trans women with years of experience. I realized how important it was to have a young person’s perspective on the show, and invited Ella to come on our road trip.

What a wonderful addition she has been! She has shown us that the world is a different place than it used to be. For example, when she came back to high school her senior year as Ella, she was immediately accepted. It makes me think that all of the work the trans community has done over the last 30-plus years has made a difference. It’s refreshing.

I could go on and on about Ella—about her activism and bubbly personality—but I’m going to let her tell you her own story.

It wasn’t until I got to grade school that I realized that everyone else’s normal was a little bit different than mine. I realized that my “normal” was something that I should hide. Subconsciously, I started to conform with my peers, hiding my femininity and what came naturally to me.

Then, freshman year of high school—I don’t know what happened—but I just totally broke free from all of that. I had known since seventh grade that I was attracted to boys, so I came out as gay. At the time, I thought that was the answer to why I was different from everyone else.

That said, deep down, I knew that if I were to date a guy, he’d see me as a male. And even though I wasn’t sure why, I knew something wasn’t right about that.

The defining moment of my transition to womanhood came during one week of my junior year of high school. As a writer and music producer, I became very inspired by Lady Gaga and David Bowie, especially her music and his androgynous fashion choices. They really spoke to me. And over the course of one week, I broke down. I went total Gaga “Born This Way”-era. I bleached my hair and eyebrows white. I bedazzled all of my clothes. I went rocker-chic and wore a ton of leather. My makeup was crazy.

Looking back now, I’m like, “Why did I do that?” But it wasn’t about the shock factor. It was serious! I went to school and I felt so liberated. I felt like I was broken from a chain that I didn’t even know was there. At the end of the week, I did a lot of thinking and research.

My mom called me downstairs one day to talk. She knew I was in a deep state of depression and asked me what was wrong.

And she embraced me from that moment.

Neither my mom nor I questioned the journey from the beginning. All of the sudden, it all made sense—my stereotypical girl passions, my obsession with female role models (like Queen Elizabeth or Kate Winslet in Titanic)…everything.

I started to transition and immediately felt validated. I realized that there were people like me and that this was a real thing. Sexuality and gender are not things that we choose. With my family’s love and support, I was able to start my senior year of high school as my authentic self – as Ella.

In addition to my supportive parents, I have been so lucky to have friends who have stood by me. My best friend, Nicole, was there from the beginning, even though she had no idea what it meant for me to be trans. She took it in; she processed it; she learned. And now, Nicole is a total scholar in trans issues. (I even call her “my honorary trans friend.”)

There are is a parallel between me and Nicole, and Cait and the world. Just like Nicole learned about trans issues by watching and going through them with me, the world is learning with Cait on her show. That’s what’s so great about I Am Cait.

Being on the show this season couldn’t have been a more fulfilling experience. I’m so grateful that I got to be around all of these trans women that I’ve respected and admired. I’ve learned so much from them, like how to be an even better advocate for the trans community. (Plus, I’ve gotten to do the coolest things—like go to the Vanity Fair Oscars party with Caitlyn and meet Lady Gaga.)

People might tell you, “You can’t do this. You can’t do things in life. You’re not normal.” I’m living proof that is doesn’t matter who you are—if you have a dream, you can accomplish anything. And remember, everything happens for a reason.

For more information on the transgender movement, see a list of resources at CaitlynJenner.com. 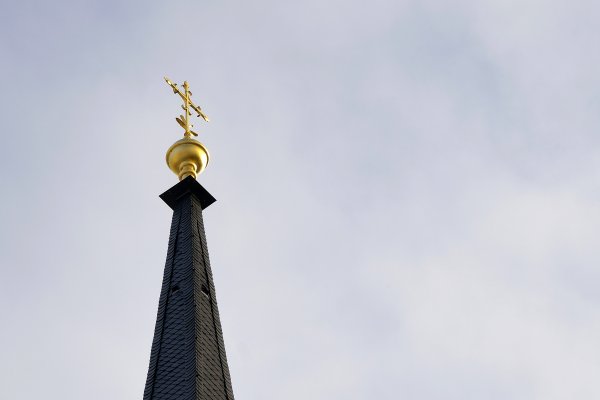 Conservative Politics Are Corrupting Evangelicalism
Next Up: Editor's Pick