Inside Hong Kong's Push to Become Cricket's Next Big Thing

It’s a drizzly, chilly February day at the Kowloon Cricket Club. The century-old colonial institution lies in the lee of People’s Liberation Army barracks, and a cricket ball’s throw from where unsmiling communist troops shoulder arms and go through their morning drills, Hong Kong’s national cricket team is doing a spot of fielding practice. Then the drizzle becomes a downpour and practice is over.

But in Hong Kong, the world’s fourth most densely populated territory, the idea of there being such vast, voluminous things as indoor cricket facilities is absurd. Such outdoor cricket facilities that are here only exist because rapacious property developers haven’t figured out a way to get their hands on them yet. There is only one ground in Hong Kong certified by the International Cricket Council (ICC) as fit for international competition. Known as Mission Road or Tin Kwong Road, it has spartan facilities for players, no spectator seating, and must share space with soccer games. Grounds at private clubs like the Kowloon and Hong Kong cricket clubs — which also have to accommodate the city’s domestic leagues during several months of the year — are too small to host international matches.

“We have very limited facilities,” says Atkinson. “For us to be where we are at the moment is quite spectacular.”

That’s an understatement. Hong Kong currently sits in 12th position position in the world rankings in the game’s most popular format, Twenty20, and it has reached this remarkable position by drawing on a nanoscopically small pool of players: there are just a few hundred regular adult players of the game in the city. Virtually no Chinese — who make up 94% of Hong Kong’s 7.2 million people — are among them. For the national squad, that leaves a handful of local-born players of white, South Asian or Eurasian origin — Atkinson, batsmen Chris Carter, Sakhawat Ali, Anshuman Rath or Mark Chapman — to call on. They are supplemented with expatriates from India, Pakistan and Afghanistan. This piratical bunch, currently Hong Kong’s highest-ranked sports team, kicks off its World Twenty20 championship campaign in India today as one of the sport’s rising global stars. Just eight years ago, in 2008, it languished in the World Cricket League’s Division Four, rubbing shoulders with Tanzania and the British island dependency of Jersey.

“From a Hong Kong perspective, it’s huge,” Atkinson’s teammate Mark Chapman says. “Because people can see that cricket is alive and well [here].”

But if the game is to grow further in the city — and attract sponsors and more facilities — space is not the only concern. It needs Chinese faces. There isn’t one in the Hong Kong side proper. (Chapman, who is half-Chinese, comes closest, along with veteran player and batting coach Ryan Campbell, who has a Cantonese grandmother). Atkinson’s successor as captain, Tanwir Afzal, is Pakistani-born and only moved to Hong Kong in 2008, having previously represented the Pakistan Under-19 side. There is a Chinese development player, Li Kai-ming, but the 24-year-old right-hander is just one of six such players, the rest of whom are not ethnically Chinese.

Part of the problem could be branding. Cricket is known in Cantonese by the spectacularly unsexy name of wood ball and it is a bafflingly foreign pursuit in a society that has, in fact, no indigenous bat-and-ball games.

‘We don’t really have a cricket-loving majority populace’
“The sad reality is that cricket’s been played in Hong Kong as long as it’s been played anywhere in the world,” says Hong Kong Cricket Association (HKCA) CEO Tim Cutler, citing an 1841 decree by British army chief General Lord Hill that all barracks — including in colonial outposts like Hong Kong — would have cricket grounds adjoining them.

“We can’t really sit on an excuse saying that we haven’t had long enough here for the game to develop [among the local community],” Cutler says. “I just think the development of Hong Kong as a British colony and the demographics and geography haven’t helped over time.”

A 33-year-old former marine insurance broker and self-confessed cricket fanatic, Cutler moved to Hong Kong from Sydney in 2013. He was appointed as the HKCA’s first-ever CEO nine months ago as part of an ongoing effort to professionalize the sport, and recognizes that there is a lot of work to be done.

“We can’t change anything that’s happened in the past, we can only look forward, but I think cricket has a great opportunity now to really connect with the local community,” he says. “We don’t really have a cricket-loving majority populace, which means that we really need to tailor the sport to Hong Kong and not make Hong Kong fit the sport.”

The HKCA is trying to foster that connection with local communities, and currently runs training programs in more than two dozen schools, but the success and scope of the grassroots outreach faces several of the same issues encountered by the national team.

“Chinese kids find it difficult because these guys are so good,” HKCA schools coach Asif Hussain says as he gestures towards his class for the day, at a school in the far-flung neighborhood of Tuen Mun near the Chinese border. His 12 students — all South Asian — are playing a makeshift game on the school’s basketball court, the biggest open space available amidst a cluster of residential buildings.

“They’ve all recently come back from India or Pakistan, so they have some experience of playing cricket,” Hussain says, explaining that the gap between children from those countries, where cricket has near-obsessive status, and their local Chinese counterparts often becomes too vast to surmount.

“It’s not that Chinese people don’t ever play, but the way the system is, they’re not able to play.” Having coached schools under the HKCA for more than eight years, the trend he has seen among young Chinese cricket enthusiasts is that they are unable to sustain their interest and commitment.

“When they go into secondary school [they have] new subjects, new teachers and a lot of pressure from parents as well,” he says. “The transition doesn’t happen, and with no opportunity to continue, they lose interest. There needs to be continuity.”

Cricket is also a time-consuming sport, with even Twenty20 games lasting at least three hours. As such, it becomes the first casualty for youngsters under pressure to excel in academics while juggling multiple extracurricular activities.

“Even for a [Chinese] spectator,” Hussain says, “if he doesn’t really know about it, he can’t really sit there for three hours for one innings and say, ‘Yeah, it’s fun.’”

Where the cricket clubs have no cricket grounds
Few places encapsulate Hong Kong cricket’s twin battles of finding adequate facilities and engaging the local Chinese population like the Hong Kong’s second oldest cricket club, the Craigengower Cricket Club (CCC). Despite its name, the colonial-era private members’ club, shoehorned between the city’s Happy Valley Racecourse and the Hong Kong Football Club, no longer has a cricket ground. It was lost to development in 1976.

Today, its members practice in a concrete rectangular space, retrofitted with turf carpets and side netting, on the third floor of the clubhouse, above the car park. During half the week, it doubles up as a golf driving-range.

These unpromising surroundings were where, five years ago, Hong Kong’s first all-Chinese cricket team was founded. Called CCC Hung See, meaning “Lions,” the team has steadily worked its way up the city’s domestic leagues and attracted a faint smattering of Chinese interest.

“I started playing for Craigengower back in 1995, and back then there was only a handful of Chinese that played,” says the team’s captain Adrian Lee, who picked up the game in Australia, where he did most of his early schooling before returning to Hong Kong. “Now, when we play, our opposition doesn’t consider us an easy team to beat. They take us seriously.”

A year after CCC Hung See’s inception, the HKCA started its own all-Chinese squad called the Pioneers. Overnight, avenues for local involvement in the sport doubled, and something seems to be happening.

The growth of the game among Chinese players over the past five years has been sizable enough to justify the formation of the semiprofessional HKCA Dragons team — an all-Chinese development team — in February 2015. Comprising a mix of players from the two existing Chinese domestic sides, the Dragons play other domestic sides as well as lower-ranked international teams like China and Japan.

The aim of this setup is to produce more players like Li Kai-ming — the national squad’s Chinese development player. He was selected by the Sydney Sixers in Australia’s domestic Big Bash League as a “community rookie” for the current season, and many in Hong Kong cricket are hoping that he will serve as an inspiration.

“We aren’t going to get to the national squad level overnight,” says Lee, the CCC team captain. “But at least we have a pathway to improve.”

Women’s cricket has proved more appealing to Chinese people, on the other hand, with ethnic Chinese players making up 70% of the current national squad. Sahil Dutta, the author of a chapter on China in the anthology Second XI: Cricket in its Outposts, says: “According to those involved in the game in China, women, rather than men, are more willing to embrace the unfamiliar.”

Hussain, the HKCA school coach, has a less fanciful theory. “In women’s cricket the skill gap is a lot less, so Chinese girls get into it easily,” he says. “As long as you’re a capable athlete, you can keep up.”

Bringing aspiring Chinese cricketers into the fold, of either gender, is not only in the HKCA’s best interests. Hong Kong is a gateway into China, and the world’s most populous nation — as it does with so many other sectors — represents a potential market of more than a billion people for the ICC and cricket. China is an ICC affiliate member, and hosted cricket as part of the 2010 Asian Games, but the game is still far from attaining mass appeal.

Cutler, the HKCA CEO, is hoping that teams like Hong Kong will be the heralds of the ICC’s desire to make cricket a truly global sport.

“We can really engage that sense of national pride in creating something that they can be proud of,” he says. “Cricket isn’t necessarily the outcome but it’s actually the tool to bring about a positive change.” 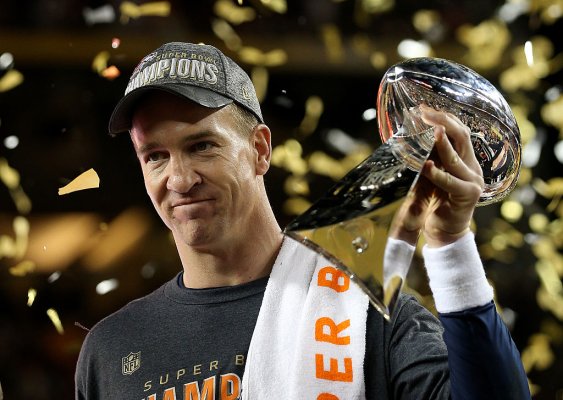 Peyton Manning Announces Retirement From the NFL
Next Up: Editor's Pick