Hillary Clinton said on Monday she supports the Obama Administration’s use of special forces to defeat ISIS in Libya.

“We already are, as you know from the headlines and the stories, using special forces, using air strikes to go after ISIS leaders,” Clinton told Fox News host Bret Baier at a televised town hall. “We ought to be supporting [Libyans], not only with special forces and air strikes against terrorists, but helping them secure their borders and deal with some of the internal challenges they face.”

Monday night was the first time Clinton has said she is in favor of using U.S. special forces in Libya. They are operating there in an advisory role, though it is unclear from Clinton’s comments whether they would play a combat role under a Clinton Administration.

Clinton has faced questions over her push, when Secretary of State from 2009 to 2013, for U.S. involvement in overturning the government of late dictator Muammar Gaddafi. Since his 2011 downfall, Libya has been increasingly threatened by Islamic terrorists and internal strife, and Clinton has been criticized by some in her party for being too eager to involve the U.S. in conflicts in the Middle East.

The former Secretary of State defended her push in Libya by saying the country has seen fewer casualties and less strife than Syria, where strongman Bashar Assad remains firmly in power.

Bernie Sanders, who voted in favor of a resolution calling for an end to the Gaddafi regime, criticized Clinton on Twitter during the town hall, saying that the intervention had made Americans “less safe.”

Clinton said Monday she opposes the use of U.S. ground troops in Libya. 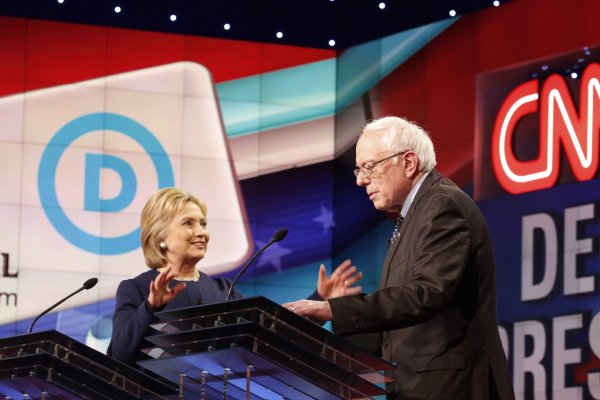 Hillary Clinton Says She Wants to Work With Bernie Sanders
Next Up: Editor's Pick