This Is What Happened to the First American Treated With Penicillin

The “marvelous mold that saves lives,” as TIME put it, was first discovered by Alexander Fleming in 1928, but more than a decade would pass before the first American patient was treated with penicillin on this day, Mar. 14, in 1942.

The patient was a woman named Anne Miller. The diagnosis was septicemia, also known as blood poisoning, that had left her near death from an infection that followed a miscarriage. She had had a fever of at least 103° for multiple weeks, according to Eric Lax’s The Mold in Dr. Florey’s Coat: The Story of the Penicillin Miracle, and even surgery and blood transfusions had not helped. By chance, another patient at the hospital caring for Miller happened to know a British scientist who was at that very moment working on developing penicillin into a marketable drug.

Miller’s doctor used that connection to get the government—which had tight control over key medicines during wartime—to release roughly a tablespoon of penicillin for his patient. It was, Lax reports, a full half of the entire store of the antibiotic in the whole United States.

Within about a day, her temperature was back to normal. Miller was cured.

Why had it taken so long for the drug, which was already being tested in the U.K., to get to the U.S.? One reason, TIME noted in 1941, was that it was “difficult and expensive to extract” from its original mold source and had not been available in synthetic forms; every time scientists wanted to make penicillin, they had to wait for new mold to grow. A few early test patients in England had died after seeming to recover because there wasn’t enough of the drug to complete the course of medicine. Even in 1943, there had only been enough penicillin made in the USA to treat about 30 people.

That soon changed. After it became clear that the drug could help those wounded in World War II, the Army Medical Corps quickly asked for more to be produced. By May of 1944, enough was being made that civilians could finally get access. “Penicillin,” TIME noted in a cover story about Alexander Fleming that year, “will save more lives than war spends.”

Read TIME’s take on “the wonder drug of 1943,” here in the TIME Vault: Penicillin 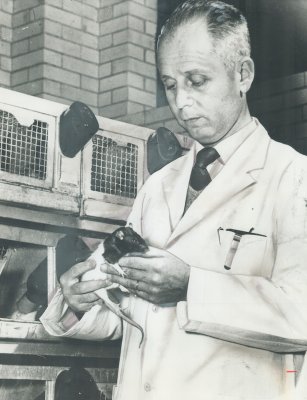 Meet the Doctor Who Changed Our Understanding of Stress
Next Up: Editor's Pick