You might think fatty foods are delicious, but fat alone isn’t actually very appetizing. (The true taste of fat, according to recent research, tastes rather like frying oil that’s been heated too long.) The taste you can’t resist is due to the sugar or salt that’s often present in fatty foods.

Lately, researchers have taken a closer look at salt. Eating lots of it has been linked to obesity, even independent of calorie consumption. Some research even shows that liking salty, fatty foods is linked to overeating and overweight even more than having a taste for sweet fatty foods. Now, a new study published in the Journal of Nutrition suggests that salt is playing an even more powerful role than we thought in making us eat more.

The researchers from Deakin University in Australia recruited 48 healthy people and measured their sensitivity to the taste of fat by mixing up three drinks—identical except for the addition of a very low concentration of a fatty acid in one of them—and asking them to identify the fatty drink. Past research has found that the lucky few who are more sensitive to the taste of fat eat less of it.

Then, once a week for four weeks, everyone ate four different lunches. The lunches looked pretty much the same—elbow macaroni with tomato sauce—but the researchers manipulated the amount of salt and fat in each pasta dish. The dishes were either low-fat/low-salt, low-fat/high-salt, high-fat/low-salt, or high-fat/high-salt. They measured how much they ate and also rated their reaction to the food on scales including pleasantness, hunger and fullness.

Adding salt to the meals increased how pleasant people thought the food was. They also wanted to eat more of the high-salt meals than the low-salt meals (not surprisingly), but that didn’t hold true for the high-fat foods over those low in fat.

Those salt cravings seemed to influence how much people ate, too. Salt made people eat 11% more food and calories, regardless of how much fat was in the meal. “Over the course of a day, that’s really a significant amount,” says principal investigator and Deakin University professor Russell Keast.

But the most telling finding came from the people sensitive to the taste of fat, who typically eat less of it. When faced with the meals low in salt, they had really good control over how much they ate. “But when we add salt to that food, all of a sudden those controls are gone,” Keast says. The people with sharper fat sensitivity, which normally helps stop overeating, ate salty food in the same volumes as those who were the least sensitive to fat—suggesting that people perceive salt so favorably that it dulls the fullness signals they’re supposed to feel.

“We’re effectively blunting out their satiation response,” Keast explains. “When we think of the food supply in terms of salt and fat being optimized, the salt is having the effect of washing away what would be a normal biological mechanism that we’ve got to actually stop ourselves from eating.”

Fat can still be blamed for a good portion of overeating. The high-fat meals led the people in the study to eat 60% more calories. But because fat is so energy-dense, they were eating the same volume of food. Eating more salt, however, did correlate to eating more food. Salt, therefore, seems to be driving the excessive consumption of fat, calories and food in general—something to remember the next time you pop open a bag of chips. 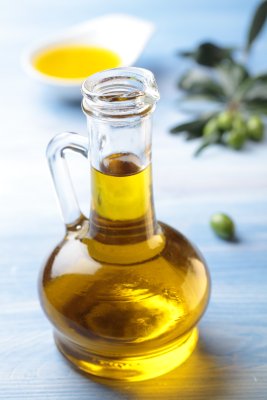 3 Ways to Get the Most Health Benefits From Olive Oil
Next Up: Editor's Pick