As China's NPC Meets, Here Are Four Danger Signs to Watch for in the Nation's Economy

Smoke billows from smokestacks and a coal-fired generator at a steel factory on Nov. 19, 2015, in China's industrial province of Hebei
Kevin Frayer—Getty Images
By Hannah Beech / Beijing

As China’s stock markets careen, global bourses follow in a punishing display of wave theory. With each 10th of a GDP percentage point shaved off of China’s growth figures, mines and mills across the world idle, sending some resource-rich nations into recession. China’s economic outlook affects not only the fates of 1.3 billion Chinese but also the fortunes of many nations across the planet.

Little wonder, then, that as China’s National People’s Congress (NPC) got under way last weekend for its annual conclave in Beijing, the state of the world’s second largest economy was at the forefront of people’s minds. The nation’s propaganda department chose the meeting of the rubber-stamp body to introduce a curiously worded political slogan, “the four consciousnesses,” referring to President Xi Jinping’s order to highlight the primacy of the Communist Party in Chinese life. But it was Premier Li Keqiang’s announcement on Saturday that the government expected the economy to grow between 6.5% and 7% that made far bigger headlines.

After all, last year, China narrowly missed its self-proclaimed target of 7% GDP expansion, recording the nation’s slowest economic uptick in 25 years with 6.9% growth. This year’s figure is the first time the government has set a goal below 7% in two decades. On Sunday, amid NPC meetings in Beijing, a top economic-planning official, Xu Shaoshi, dismissed fears of a hard landing in China, saying there was “no way” such a slowdown would ensue, according to the official Xinhua news agency. But here are four economic indicators to be concerned about in the year ahead:

1. Overcapacity
China now has a lot of factories that make a lot of things that people no longer want. That’s bad news, not only for nations that supply the Chinese economic engine with natural resources but also for workers at home who haven’t been paid in months or who, equally concerning, keep churning out unneeded products.

Last week, the Chinese government announced it would lay off 1.8 million workers in the state-owned steel and coal industries over an unspecified time period. Mass layoffs in the 1990s claimed more than 30 million jobs at state-owned enterprises. Back then, though, double-digit growth rates ensured alternative job creation. This time around, is China committed to eradicating so-called “zombie” enterprises, especially given the potential for worker unrest during an era of slower growth? “China has not followed through on the attempts it has made over the last decade to address overcapacity,” said Jörg Wuttke, president of the European Chamber of Commerce in China, as the business organization released a report on the overcapacity plaguing eight key industries. “Without a sustained effort to address it now, overcapacity may well seriously impede the effectiveness of China’s economic reform agenda.”

2. Market sentiment
As President Xi’s anticorruption campaign kicks in and the business community gets used to a “new normal” of lower growth rates, worries have coalesced that people — along with dirty money — are beginning to flee China. That vague sense has gained more definitive contours with data showing surging capital outflows. Can the very people who profit most from China’s nexus of business and politics be losing confidence in the nation’s economy?

Meanwhile, last month the Shanghai stock market hit its lowest point since 2014. In truth, a smaller proportion of Chinese are exposed to the stock market than are Americans. (Far more wealth is invested in China’s massive property market, which carries its own problems.) Still, stock-market sentiment counts for a lot, and the Chinese government’s response to last year’s free fall — ham-fisted and expensive attempts to order the market to turn around — didn’t do much for the reputation of the nation’s economic planners.

Since then, the nation’s stock-market regulator has been sacked. But the stock-market woes, followed by clumsy efforts to stabilize the yuan, which have eaten up hundreds of billions of dollars in foreign-currency reserves — continue to raise questions about the stewardship of China’s economy. Speculators have bet that the yuan will continue its slide, which will, in all likelihood, lead to even more capital outflows as Chinese invest their money abroad before their yuan is worth less than it is now.

3. The innovation economy
Premier Li has tied his economic plan to the economic buzzwords of the 21st century: green growth, IT investment, entrepreneurship. China does need to transition from a manufacturing-based economy to a more service-based one. Technocrats realize that the country’s punishing pollution — the air last week in Beijing spiked to toxic levels, even as thousands of political delegates descended on the capital — could drive away precisely the kind of young, educated citizens on whom the nation is counting. Already, the nation has made strides in alternative-energy development and digital innovation.

Yet even as Beijing pledges itself to new economic drivers, politics seem at odds with the nation’s stated commitment to an innovation economy. Xi’s ideological campaign to force the Communist Party back into people’s lives works against the notion of global openness. The Internet beyond China’s borders is harder to access than before. The space for critical debate — often considered key in nurturing innovation — has narrowed. Fewer foreign companies are investing in a closing China.

Li, who holds a doctorate in economics, also possesses less power than his predecessors Wen Jiabao and Zhu Rongji did. Instead, Xi, the country’s most powerful leader in decades, has deposited his trusted aides in economic-planning committees. The Chinese President has also taken personal charge of “leading small groups,” the powerful cliques that can direct policy more decisively than the bureaucracy supposedly in Li’s hands.

4. Numbers game
About that 6.9% GDP growth from 2015: most independent economists place little faith in the numbers produced by China’s state-employed statisticians. Earlier this year, the chief of China’s National Statistics Bureau was sacked and is now being investigated for “serious disciplinary violations.” The question is, Just how inflated are China’s growth figures?

There’s little doubt, however, in at least one figure — the nation’s growing debt burden. At the same time, now that China has committed to at least 6.5% GDP growth for 2016, some economists worry that efforts to meet even that target will undercut motivation to carry out badly needed reform. Earlier this month, Moody’s Investors Service downgraded its outlook for Chinese government credit ratings from “stable” to “negative.” One reason, according to the ratings agency? “Uncertainty about the authorities’ capacity to implement reforms — given the scale of reform challenges — to address imbalances in the economy.” But a brittle response from a state-linked researcher in the People’s Daily, the Chinese Communist Party’s mouthpiece, decried the Moody’s downgrade as a misjudgment “attributed to a poor understanding of the Chinese economy.” In China, politics are never far from economics. 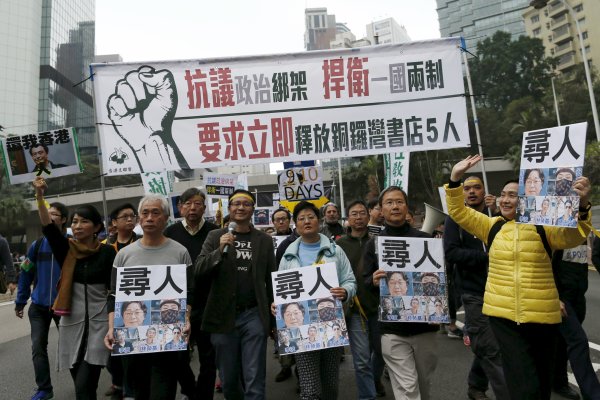