Why Democrats Were Debating the 1990s

The Democratic debate Sunday felt like something from the CNN archives. The NAFTA trade deal. The Brady Bill against guns. Bill Clinton’s jobs records. A crime bill and welfare reform. All came up at different points in the two-hour debate as both Hillary Clinton and Bernie Sanders put the 1990s — and each other — on trial.

The Flashback in Flint was the fight Bernie Sanders has been longing to have, and he turned Bill Clinton’s time in the White House into target practice. He called free-trade agreements “stupid,” banking deregulation destructive and his domestic policy agenda corporate-driven.

Hillary Clinton, of course, played an outsize role in her husband’s Administration, but Sanders perhaps unintentionally elevated the former First Lady to co-President. And she was more than ready to engage him, having long since given up trying to distance herself from her husband’s tenure.

“If we’re going to argue about the 1990s, let’s try to get the facts straight,” Clinton said. “Let’s talk about 23 million new jobs, incomes went up for everybody.” She pointed to efforts in the 1990s to reduce lead levels in construction and water and policies that lifted African Americans’ incomes.

Read More: Read the Full Text of the Seventh Democratic Debate in Flint

For all the jousting over the days of hypercolor shirts and compact discs, at stake in Sunday’s debate was the future of the Democratic Party. The 1990s were a time when the Democratic Party adopted a more pro-business, moderate course which Sanders vows to correct with a sharp left turn. It was a charged argument coming from a longtime independent who only recently joined the Democratic Party.

Clinton retorted that Sanders’ position was a “lonely” one. She reminded the audience of the economic boons of the 1990s and President Obama’s own record in helping Michigan’s auto industry dodge disaster.

The night of questioning may have played to Republicans’ advantage. At many points through this campaign, the GOP candidates have cast Hillary Clinton as little more than a decoy for Bill Clinton’s third term. Sanders’ efforts seemed to augment that, equating Bill Clinton’s presidency with Hillary Clinton’s record, blending the two as if the couple was incapable of disagreement.

Clinton just went with it. She knew her family’s record and was eager to defend it. It was certainly easier to debate Sanders on policy than the attacks she is certain to face from Republicans if she is the nominee: the scandals of the 1990s are certainly going to be re-litigated by the Republican nominee and his allies.

This debate took place in Flint, Mich., a city that has faced decades of economic downturn as heavy industry has moved overseas, as well as water that is quite literally poisoning its citizens. With a vengeance, Sanders placed much of the blame on Clinton’s shoulders. “Do you know that in 1960, Detroit, Mich., was one of the wealthiest cities in America? Flint, Mich., was a prosperous city,” Sanders said. “Those trade policies, as much as any other set of policies, has resulted in the shrinking of the American middle class.”

For her part, Clinton had good reason to bring up her husband, who has enjoyed a deep and durable relationship with black leaders in Michigan who will prove crucial to Tuesday’s primary. Both candidates’ aides have nicknamed the upcoming vote the “Showdown in Motown” and consider it a crucial testing ground of their coalitions: Clinton, with African Americans and urban voters; Sanders with poorer, white working-class votes.

Advisers to both campaigns are predicting a close race and one that might be powered by voters’ uncertainty over the economy. The economic meltdown of 2008 badly hobbled Michigan, and the auto industry’s near-implosion left residents queasy. Indeed, many streets in Detroit are little more than ghost towns. There is a reason Michigan is a favorite for filmmakers in need of a post-apocalyptic setting. Yet President Obama remains popular here, and Clinton has cast herself as the best steward of his legacy.

Sunday night’s debate was the latest in a string of never-ending television that features Sanders railing against billionaires and Clinton promoting herself as a results-oriented figure. It was unlikely to upend the race, which is more likely to be decided by churches and unions than the activists and moneyed party leaders who visited Flint and then quickly returned to their homes.

Senior officials in both campaigns came to face reporters, satisfied the night was a win for each. Sanders made Clinton defend the past, while Clinton left Sanders looking petulant and rude — even though it was she who interrupted him.

Clinton’s campaign was playing up Sanders’ attacks on her, including his tone at some points. “His tone was pretty defensive and disrespectful,” campaign communications maven Jennifer Palmieri said. “He was a little hotter than I’ve ever seen him in his setting with her. It was a little off-putting.”

Read More: Watch the Most Heated Moment at the Democratic Debate

“He seems to obsess about what happened in the 1990s or even further back. Her focus is more on the future,” Palmieri added.

During the debate, Sanders hung close to his outsider status, reminding the audience that while the Clintons were in the White House, he was railing against the Establishment from the outside. “I am very glad that Secretary Clinton discovered religion on this issue, but it’s a little too late,” Sanders said. “I was on a picket line in the early 1990s against NAFTA.” Sanders claimed Clinton supported “every” trade agreement, and she retorted that she had opposed the Central American Free Trade in 2005 — the only trade deal where she had a vote as an elected official.

All Sanders’ bluster against Bill Clinton’s presidency gave his wife an opening to paint Sanders as an outsider to the Democratic Party agenda. She accused him of not doing enough to support American exports by opposing the Export-Import Bank, which provides loans to businesses. And she painted him as an outsider on gun control when Sanders hedged on gun owners’ liability. “That is just like the NRA position,” said Clinton. “No.”

The debate may have gone over the head of many younger voters — this year will be the last federal election cycle in which the youngest voters were born in the 1990s. But the fights over the direction of the Democratic Party that flared up then will surely come up again, even if Clinton beats back Sanders as expected.

Most Popular on TIME
1
Judge Orders Extradition of Teen Charged in Kenosha Shooting
2
The 5 Best New TV Shows Our Critic Watched in October 2020
3
Yes, Texas Could Go Blue This Year 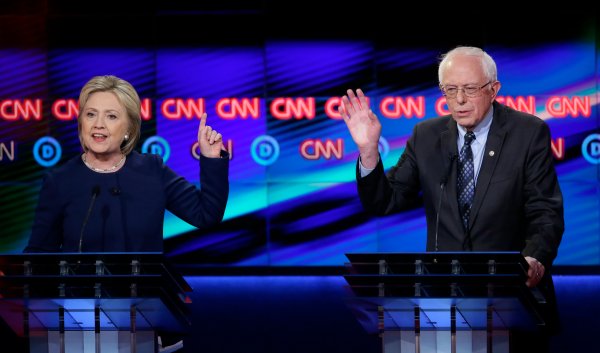 The Most Heated Moment at the Democratic Debate
Next Up: Editor's Pick