Charrar Pind, or simply the Village, is a sprawling mass of litter-strewn, narrow streets and overcrowded tenements where children with matted hair and threadbare clothes play next to open sewers. A slum of roughly 50,000 people to the east of Pakistan’s second largest city, Lahore, it is home to the city’s cleaners, domestic helpers and other menial workers. Families from surrounding towns come here in the hope of finding enough work to climb out of poverty, but it has few opportunities.

On the outskirts of Charrar Pind, boys play cricket in what passes for a park but in reality is a dusty wasteland. Those not playing cricket sniff glue and smoke hash. Many of the children here have had to leave school to help support their families by finding odd jobs.

With 60% of Pakistan’s population living under $2 a day, poverty is a huge obstacle to education and fosters the extremism that fuels the country’s sectarian insurgency — devastating conflicts that have cost the Pakistani economy some $68 billion. Lawless hinterlands on the porous border with Afghanistan are overrun with warring jihadist factions, including the Pakistani Taliban, al-Qaeda and dozens of smaller Islamic extremist groups. The Islamic State of Iraq and Greater Syria (ISIS) has also been making inroads.

Attacks and suicide bombings in public spaces, crowded markets and schools have been a common occurrence over the past decade. In the past five years, 2,000 people have been killed in sectarian attacks. The most deadly in the country’s history was the Peshawar school massacre in 2014, when seven armed gunmen from Tehrik-i-Taliban Pakistan — the same group behind the attack on Nobel laureate Malala Yousazfai — opened fire on students and staff, killing 141 people including 132 children. In January, four gunmen stormed Bacha Khan University in the northwestern Pakistani city of Charsadda, killing 21.

One man who is trying to prevent impoverished, uneducated children from getting caught up in sectarian violence is Bashir Ahmad. What makes him strikingly different to the other would-be saviors of Charrar Pind is the fact that he is a 33-year-old U.S. Army vet, raised in Virginia. He’s also a professional mixed-martial-arts (MMA) fighter.

‘Where we create good citizens’
Ahmad was born in Pakistan and grew up in the U.S. before returning to Lahore in 2007, after completing his U.S. military service. He has since built up a community of MMA fighters, established the country’s first promotion — as companies that organize MMA bouts are called — and opened two gyms. But most importantly, he is using the sport to create opportunities for kids to get out of poverty.

“Peace through sports,” he says. “I’ve got that on my shorts.”

Ahmad’s commercial gym is called Synergy. But, in Charrar Pind, he has opened a second facility named Shaheen (“Falcon”) and gives free classes to the neighborhood kids. He drives there, passing mothers bundled in ragged shawls and children going from car to car begging for money or selling roses.

The slum is an island of destitution encircled by the more affluent, military-owned Defense Housing Authority township that surrounds it. Rickshaws, mopeds and the occasional horse and cart clog up the narrow roads. A butcher slaughters chickens on a wooden table. Bloodied feathers flutter to the ground.

Shaheen is in the basement of a nondescript building. It doesn’t seem like much — some mats, a couple of punch bags and a ring — but to the kids that use it, it is everything. Among them is Abu Bakr, a quiet 11-year-old with neatly brushed hair who lives in Charrar Pind with his family. Abu Bakr’s mother is a cleaner at Ahmad’s other gym, where Abu Bakr would sit for hours, watching as Ahmad and the other martial artists sparred and grappled, before being asked to train with them.

He looks up to Ahmad as a father figure and, when not in school, spends his time at the gyms running errands and even training some of the other boys. “My favorite move is the Superman punch,” he says, demonstrating it — with convincing force — on one of the coaches.

“He’s a little leader now,” Ahmad says. “This guy is going to do so much better than all of us.”

“Jab-jab-cross,” Abu Bakr shouts, as he takes over the class in Shaheen, adjusting stances and straightening the arms of his ragtag crew of fighters.

Ahmad has big dreams for this place. His mission is to give it the air of a community center, where kids can come “to learn some basics, such as how to read and write,” as well as fight. Such a facility is sorely needed, because Pakistan’s public-education system is in tatters. Out of the country’s 50 million school-aged children, 24 million don’t go to school.

About 20 boys are running in a big circle to warm up. Some are wearing traditional salwar kameez — loose drawstring trousers and tunics — while others are in jeans. One small boy wears a shirt and tie. When Ahmad asks how many go to school, less than half put up their hands.

“The point is that if you don’t have an education, any kind of basic education, and you see someone in a place of authority, you’re going to believe what they say,” he says, adding that this is one reason why young people can get lured into fundamentalism.

“I remember making a Facebook post once that got a debate going,” Ahmad says. “It said the biggest security threat to the country is not our neighbors but illiteracy and education.”

It isn’t just boys and men who train at Ahmad’s gyms. One of the regulars is 15-year-old Sara Ajmal, a tall girl with long hair who can take on any of the boys her age. “MMA is not a gendered sport,” she says as we sit in the ring after her training session. Her family fled Afghanistan in 2003 to escape Taliban rule, and Ajmal has been living in Pakistan since she was 3 years old. Her dream is to study in the U.S. and one day return to Afghanistan to be the nation’s first female President.

“Everyone, including my teachers laughed when I said that,” she says defiantly. In the conservative Muslim-majority society of Pakistan, it’s difficult for women and girls, especially from poorer backgrounds, to have any kind of independence. But “fighting makes me feel secure,” she says, “I want to show that I can protect myself.”

‘It was my job to take care of people’
Ahmad discovered MMA while serving in the U.S. Army, which he signed up for during college. He was sent as a medic to Iraq in 2004. There, he says “I saw the worst in humanity and I saw the good things as well.”

Being a medic is what got him through his tour of duty. “You are there to do the complete opposite to what war is about,” he says, recounting how local people would come to him and ask for medical assistance. “It was my job to take care of people, no matter who they were.”

And it’s this paradox — finding healing amid the fighting — that Ahmad has built his life around. The other constant is Pakistan. Sitting in his poky one-bedroom apartment — dark, stuffy quarters that are “unbearable in the summer months” — Ahmad says he feels at home.

Though Ahmad grew up in the U.S., his family hail from Punjab – one of four provinces in Pakistan — and he regularly spent time visiting various relatives as a child. Lahore, Pakistan’s cultural center and home to about 7 million people, imprinted itself on him. He found a freedom in the chaos of the city’s streets and markets that rigid American suburbia couldn’t offer.

“People say America is the land of the free,” he says. “But real freedom is here,” he laughs, remembering a time as a kid when he could wander unimpeded into the local market in Lahore with a pellet gun to shoot at birds. “It’s because there’s no law and order in that sense.”

Bashir Ahmad of Pakistan, in white shorts, attacks Shannon Wiratchai of Thailand during the ONE Fighting Championship at Singapore Indoor Stadium on April 5, 2013, in Singapore
Suhaimi Abdullah—Getty Images

Even as a child, Ahmad knew that he would come back. “It was in my DNA, deep inside my soul there was already knowledge of that,” he says. When MMA exploded onto the U.S. mainstream in 2006, he saw his chance. “I was like, Man, Pakistan needs to know about this sport, it’s going to take over the world.”

He started small, teaching a Taekwondo class (“they were living in this Chuck Norris, Van Dam ’80s action-movie era of martial arts”). When he introduced the students to MMA techniques, their reaction was so enthusiastic that Ahmad set up a Facebook community for Pakistani MMA enthusiasts. He rented an apartment and in the front room set up his first gym, a grimy place with “grease all over the floors.” Synergy grew out of that.

“Pakistan is hugely divided as a nation,” says Mamood Rahman, 31, Ahmad’s business partner and a successful musician, with three No.1 albums in Pakistan, as well as a song on the soundtrack to the 2012 political thriller The Reluctant Fundamentalist. “When you step into the gym, it doesn’t matter who you are, who your father is, what you do. The only thing matters in the gym is: Can you fight? Are you good enough? Are you going to get your butt kicked?”

Rahman and Ahmad founded PAK MMA Fighting Alliance, an organization to sponsor fighters and sets up professional bouts. There are now international champion fighters in Pakistan: Waqar Umar and Uloomi Karim are the country’s rising stars. Ahmad himself is Pakistan’s premier fighter and is signed with ONE Championship, Asia’s largest MMA promotion. He victoriously fought in his first international fight in Singapore against Thailand’s Shannon Wiratchai in 2013 and since then has bagged three out of six international wins. “When I fought that changed everything. For myself and for MMA in Pakistan.”

In the evening, Ahmad takes TIME to a shrine dedicated to the branch of Islam he draws some inspiration from — Sufism. Devotees gather to chant and smoke copious amounts of hashish, which has a sacred status is Sufi Islam. To the beat of a dohl drum, men begin to spin, their long hair flowing.

For Ahmad, there’s a parallel between this kind of worship and his form of fighting. “Before I fight, people ask me how I feel, and it’s like pure consciousness because there are no thoughts going on at that point. When your name gets called out and you’re standing there waiting, there is nothing going on and I feel like I’m in a trance.”

Only one sound can break through it. A sound as insistent now as it was when he stepped off the plane — the prodigal son, hoping to spread the news about the redemptive powers of martial arts. It’s the sound of the city itself. “I always go back to the drums,” Ahmad says, as dancers careen around the room, eyes closed and heads shaking. “To the heartbeat of Lahore.” 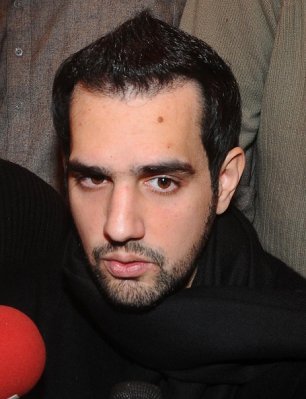