Scott Kelly celebrated his highly anticipated return to Earth after spending a year in space by jumping into a pool with all his clothes on.

It was one of the first things the American astronaut did when he finally made it home to Houston after undergoing hours of initial medical tests and data collection, he wrote on Facebook on Friday, posting a short video of his nighttime dip. “Been a busy couple days since I’ve been back on the planet and at home,” he said. “After a long night and early morning, I finally made my way home. Great to be back on Earth. There’s no place like home!”

Kelly, who landed back on Earth in Kazakhstan last Tuesday after a historic 340 days in space, plunges into the pool sideways and emerges a short time later with a sigh of relief, the video shows. “Man, that feels good,” he says with a laugh.

The NASA astronaut was on a mission aimed at helping scientists understand the effects of prolonged zero-gravity exposure on the human body. TIME chronicled the year-long mission for a documentary series, A Year in Space, which premiered Wednesday on PBS. 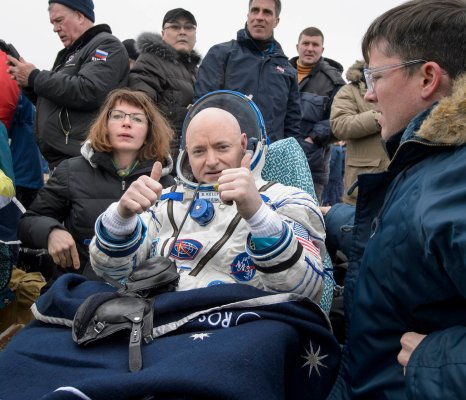